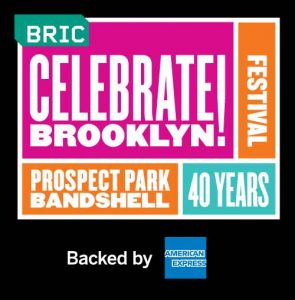 BRIC Announces Lineup And Sponsors For 40th season Of

At The Prospect Park Bandshell

Of the BRIC Celebrate Brooklyn! Festival, Billboard writes, “In the crowded summer festival season, BRIC Celebrate Brooklyn! stands apart.” Since it began in 1979 as a catalyst for a burgeoning Brooklyn performing arts scene, and to bring people back into Prospect Park after years of neglect, the Festival has become one of the city’s foremost summer cultural attractions. Winner of the Village Voice Readers’ Poll and Critics’ Picks for “Best Free Concert Series,” BRIC Celebrate Brooklyn! Festival is New York City’s longest-running summer outdoor performance festival. Over its 40-year history, the Festival has presented more than 2,000 artists, drawing a diverse audience upwards of 200,000 each season. Time Out New York writes, “Catching one of these gigs is guaranteed to be a highlight of your summer show-going season, whether you’re seeing a buzzy indie-rock band, a classic soul or funk group, or one of the best hip-hop artists around.”

The 2018 season kicks off June 5 with a free BET-sponsored opening night concert by Academy and GRAMMY Award-winning actor and musician Common. Preceding the concert will be a gala honoring outgoing BRIC President Leslie Griesbach Schultz for her 13 years of transformational leadership. Since 2005, Schultz has helped BRIC grow from $3.7 million to $15.8 million in annual operating revenues; led the transformation of BRIC from an umbrella for largely discrete arts and media programs in disparate locations into a leading, high-impact institution in an award-winning new facility in Downtown Brooklyn; vastly expanded BRIC’s programming, education initiatives and community-engagement work; strengthened BRIC’s commitment to providing support and resources for Brooklyn artists and media-makers; and advanced workplace equity and diversity.

The 2018 season exemplifies the BRIC Celebrate Brooklyn! Festival’s signature mix of music, film, dance and multimedia works, complemented by food and other provisions from local artisans and vendors. Of the 31 total performances being presented this season, 25 are free (with a $5 suggested contribution at the gate): 21 music concerts, two Music & Movies performance events in which live music accompanies films projected on one of NYC’s largest (50’ wide x 21’ high) outdoor screens, and two dance performances. The remaining six shows are ticketed benefit concerts, which offer rare opportunities to see great artists in an extraordinary outdoor setting at reasonable ticket prices while supporting the Festival’s free performances.

The Music & Movies series events include a screening of Viktor Jakovleski’s 2017 documentary about the National Pyrotechnic Festival in Tultepec, Mexico, Brimstone and Glory, with a live score by Wordless Music Orchestra, and an opening set by Sonido Gallo Negro (July 21); and Hayao Miyazaki’s Nausicaä of the Valley of the Wind (1984) with an opening performance by Kaki King (July 28).

The 40th season of the BRIC Celebrate Brooklyn! Festival is backed by long-time sponsor American Express, as part of the company’s commitment to strengthen the communities where its Card Members and colleagues live and work.

Bud Light returns for the 16th consecutive year, and will activate with fun VIP experiences at their four-concert Bud Light Music Series.

Sorbabes will once again refresh Festival crowds with dairy-free, plant-based sorbets made from rich nut butters and real fruits with delicious toppings folded in. Sorbabes – It’s not ice cream, it’s better. Discover for yourself @Sorbabes.

WorldStage and Audible Difference Inc. are the official providers of the Festival’s lighting, video and audio systems.

Hilton Brooklyn New York is the official hotel partner for the Festival.

The Festival is presented in partnership with the City of New York Parks & Recreation and the Prospect Park Alliance.

A complete list of supporters can be found at www.BRICartsmedia.org/cb.

BRIC President Leslie Schultz, said, “We are enormously proud that the world-class BRIC Celebrate Brooklyn! Festival has become a leading light of New York City’s vast cultural offerings, and that we are marking our 40th season of extraordinary, diverse and free performances. For four decades—since the summer of 1979—the Festival has represented the best of what Brooklyn and America can be: a welcoming supercollider of ideas and cultures, informing and enriching each other. We are grateful for all the support BRIC receives to keep the festival free and accessible to all New Yorkers.”

Jack Walsh, BRIC’s Vice President of Performing Arts and Executive Producer of BRIC Celebrate Brooklyn! Festival, said, “We are thrilled to announce the 40th summer season of the BRIC Celebrate Brooklyn! Festival at the Prospect Park Bandshell. This special season features over fifty celebrated artists from around the world and around the block who reflect the times and advance the Festival’s founding principles of inclusion and democracy, illuminating the vibrant cultures that make our borough so unique. We invite everyone to come together at the Prospect Park Bandshell as these artists take our stage to compel, intrigue, entertain and uplift us.”

Sue Donoghue, President of the Prospect Park Alliance, said, “We are delighted to host the 40th season of BRIC Celebrate Brooklyn! Festival at the Prospect Park Bandshell. Over the past four decades, this festival has brought a wide range of free music and family programming to Prospect Park, to the delight of the many diverse communities we serve. Congratulations to our partners at BRIC for this tremendous success.”