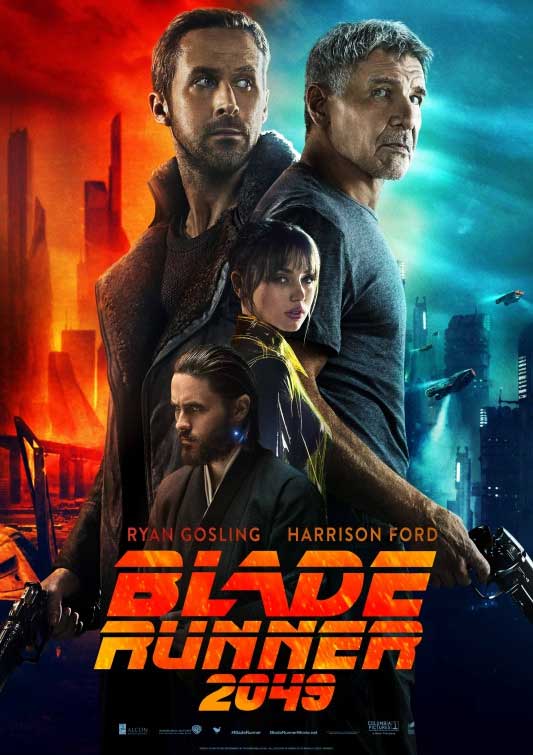 The last time I had this much fun was when the dryer broke down at my last trip to the laundromat, thus extending my viewing enjoyment by another half hour or so.

Not that the entire experience was an excruciating one. Heck, I’ve waited 35 years to be able to see a sequel to that masterpiece of films, Blade Runner; something I’ve eagerly looked forward to all this time.  It’s because of that very anticipation and my love of the original that I was able to appreciate this story’s very existence, if at all. Alas, it’s in the delivery that it fails miserably.

Running at 2 hours and 44 minutes, this film was way too long for its own good. Scenes stretched out farther than need be. Why must one suffer through lingering shots unless there’s an iota of dramatic substance to be found within; or how about some cinematic awe? It’s been over three decades since the original and the technical aspects of filmmaking have advanced by leaps and bounds.  By the same token, 30 years had transpired in this fictionalized world. If there’s any truth to technology advancing at an accelerated rate then surely things have changed within that very world. Show us something. We’re at the theater to be entertained, drawn in and hopefully awed. Yes, the story’s important but if you’re going to draw things out then for Pete’s sake captivate us; give our eyes something to feast upon!

You know, Stanley Kubrick’s 2001: A Space Odyssey is considered a masterpiece for a number of good reasons. One of which is how its long drawn out scenes held onto our attention through all the eye candy fed our way. It was 1968 and what that trailblazing film had to offer was cutting edge in its narrative and technical accomplishments.

Of course, holding onto our attention needn’t be accomplished merely through visuals. Great plot devices and characters you care about might just be enough. Too bad this film lacks both. I simply didn’t give enough of a damn about the characters except maybe Harrison Ford’s Rick Deckard and Edward James Olmos’ Gaff for the obvious reason of their having starred in the 1982 version. Whatever hold they had on me this time around was all but fleeting. Although, therein lies the answer to the $65k question. What the original had, which this one didn’t, were interesting characters with whom you wanted to get acquainted with. Nearly all the characters from that original possessed magnetic personalities. There was chemistry amongst them and more; from Deckard’s passionate encounters with Rachel (Sean Young) to his brutal confrontations with Roy Batty (Rutger Hauer), it was all unmistakable. That notion extends to all the other characters found within the first installment.

Something of concern to me is how the Director, Denis Villeneuve, had also directed Arrival. It’s another film I’d looked forward to with anticipation, that is, considering the numerous times I’d re-read Ted Chiang’s Story of Your Life on which that film was based upon. It too was a disappointment for me. Rumor has it that he’ll be working on Frank Herbert’s Dune. Wouldn’t you know it? Decades ago, I read and enjoyed that work so much that I continued my literary journey through the following six novels in that franchise. Hearing of Villeneuve’s involvement in a cinematic reworking of Dune (it’d already been attempted at least twice in the past) doesn’t give me hope.

In closing, I will be watching Blade Runner 2049 again once it’s available on disc but not with the greatest of enthusiasm.