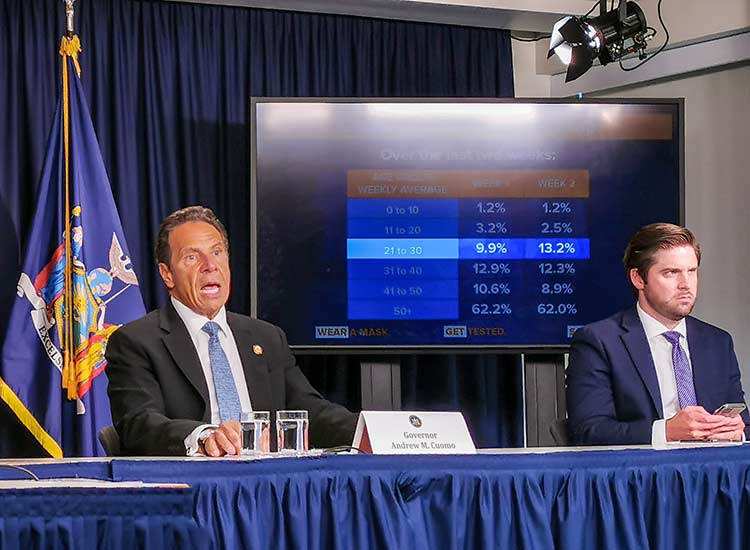 NY Governor Andrew Cuomo this week followed up on what was begun by the Mayor over a week ago. That is, mentioning the increase in Coronavirus infections amongst young adults. It’s an odd thing when that which the Mayor proclaimed would benefit the quality of life in New York City ends up being that which threatens folks’ lives.

“One of the things we’re watching are the bar and restaurant violations and the congregations in front of bars and restaurants. We believe that’s connected to the increase in the number of young people, the infection rate among the number people, 21 to 30, went from nine to 13, so we’re watching that. I’ve asked local governments repeatedly to step up and do the enforcement. That’s what they’re supposed to do, enforce the law. They’re not enforcing it aggressively enough. I said the State Liquor Authority and the State Police would help, and we are doing just that. Yesterday, they went out last night, through primarily the downstate area, Manhattan, Long Island, Queens, Astoria, Rockville Centre, Baldwin, Jackson Heights, Lower East Side. They found a number of violations. They’re issuing violations to 37 establishments today. So they’re doing their job, they’re doing it aggressively, but again, the State Police and the SLA are not going to be enough. Local government, stand up and do your job. NYPD, do your job. Nassau County police, do your jobs. Suffolk County police, do your job. Erie County the same thing. SLA and State Police will continue and they’re there to work hand in hand with the local governments.”

“Also, we are monitoring a second threat which is the rising Covid rates among younger people. You look at the age brackets, it’s basically flat or down except for one group: 21 to 30 years old. And it has picked up four points; that is a significant increase in a short period of time and we know why. We have been talking about it. You can see it on the news, you can see it in the newspapers, you can see it in social media. It’s not hard to understand what is going on. It’s hard to deal with it but it’s not hard to understand what’s going on. You get groups of young people, it’s warm, they’ve been locked up for a long time, we like to socialize – I get it. You don’t socially distance, you don’t wear masks, the virus spreads and it is happening.”

“Even though we have overall seen a huge reduction in the presence of the coronavirus in this city, we do see one trend that’s worrisome for young adults. We see the infection rate rising, and the particular group we’re concerned about is 20-year-olds to 29-year-olds. Now we see from 30 to 39 years old, some increase as well, and we take that very seriously. But particularly amongst this younger group, 20 years old to 29 years old, we see a problem and we need to address it. And I understand for so many younger adults, it has been a really difficult time, cooped up, disconnected, away from loved ones.”

NY Gov Cuomo: Covid-19 Rapid Testing to be Made Available For Every County in State

Maya Wiley Announces Candidacy for Mayor of New York City  Yours truly had the fine chance to attend today's announcement. By the steps of the...
Read more

GOVERNOR CUOMO ANNOUNCES NEW CLUSTER ACTION INITIATIVE Going forward, one should keep in mind that the zones mapped out by the Governor's Office are likely...

Governor Cuomo: New York Will be in a World of Hurt for a Long Time if Washington Doesn’t Help

Governor Cuomo: New York Will be in a World of Hurt for a Long Time if Washington Doesn't Help In response to a question he...
Read more

Recommendations on Mask Usage from Dr. Chokshi, head of the NYC Dept of Health and Mental Hygiene The subject of facial covering/mask usage was brought...
Read more

NY Number of COVID-19 Tests Administered in One Day Surpasses 100,000

Number of COVID-19 Tests Administered in One Day Surpasses 100,000 NY Governor Cuomo today announced that the number of tests administered in a single day...
Read more

Alaska and Delaware Added Back to NY Travel Advisory Watchlist