‘Beyond Suffrage, A Century of New York Women in Politics’ exhibition at MCNY

Beyond Suffrage, A Century of New York Women in Politics – MCNY’s newest exhibition

Women’s suffrage in New York State was legalized in 1917 and it is with that in mind that the Museum of the City of New York presents its latest exhibition, Beyond Suffrage, A Century of New York Women in Politics. Beginning October 11, 2017, it will be on display on the third floor of the museum’s, located at 1220 Fifth Avenue at 103rd Street until the Summer of 2018.

Present at the preview we attended was Whitney Donhauser, Ronay Menschel Director of the Museum of the City of New York. “” Beyond Suffrage marks this momentous occasion by tracing the story of these incredible women who had entered the political fray over the course of the following century.””, said Ms. Donhauser.  “” New York has always been at the corner of the struggle for women’s rights … The women featured in this exhibition reflect the diversity of the city which they helped shape both in terms of background and political beliefs.””

The exhibition is divided up into four sections: Suffrage, Persistence, Influence and Liberation. There are plenty of historical and modern quotes, photos and video displays hanging off the walls and dispersed throughout the gallery; all of which are mainly grouped in relational relevance to one another. One catches sight of modern day household names as well as those one might never have heard of before. All women who’ve had some part, politically speaking, in the struggle for women’s rights.

Aside from an interactive voting booth and other displays, there’s also Hillary Rodham Clinton’s pantsuit and the dress worn by Carrie Chapman Catt, both of which you can read more about within the image gallery found further down on this page. 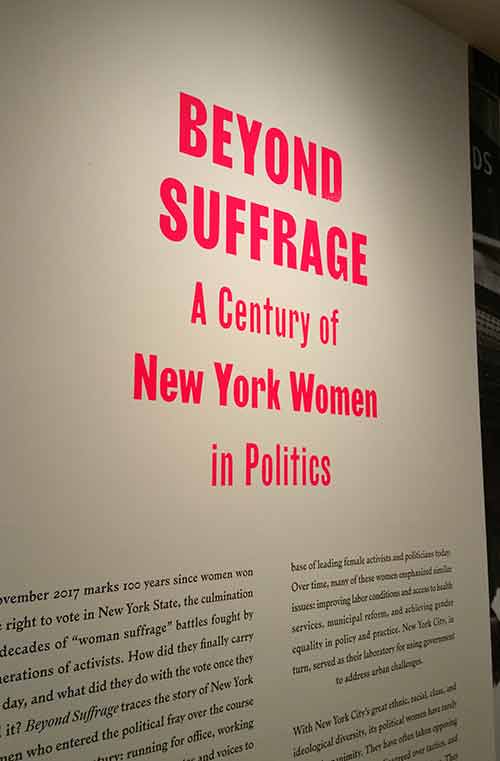 November 2017 marks 100 years since women won the right to vote in New York State, the culmination of decades of “woman suffrage” battles fought by generations of activists. How did they finally carry the day, and what did they do with the vote once they had it? Beyond Suffrage traces the story of New York women who entered the political fray over the course of the following century; running for office, working behind the scenes, and using their votes and voices to push for new laws, policies, and protections.

New York City was both a training ground and a battleground for these women. The city was the headquarters of the national suffrage movement in the early 1900s; the site of universities and clubs that prepared a professional class of women for politics in the 1920s and ’30s; the center of the women’s liberation movement of the 1960s and ’70s, launching the careers of path-breaking elected officials; and it is the home base of leading female activists and politicians today. Over time, many of these women emphasized similar issues: improving labor conditions and access to health services, municipal reform, and achieving gender equality in policy and practice. New York city, in turn, served as their laboratory for using government to address urban challenges.

With New York City’s great ethnic, racial, class, and ideological diversity, its political women have rarely attained unanimity. They have often taken opposing stances on policy issues, disagreed over tactics, and prioritized some voices at the expense of others. They have also debated whether they should join politics in spite of their gender or because of it. Yet the women in Beyond Suffrage share this much at least: a belief in voting as a way to address problems and the desire to challenge the stereotypes and barriers that confronted the generations that preceded them.

Following are individual photos taken, immediately followed by the transcribed text appearing on the adjoining placards; with an additional image gallery beyond. 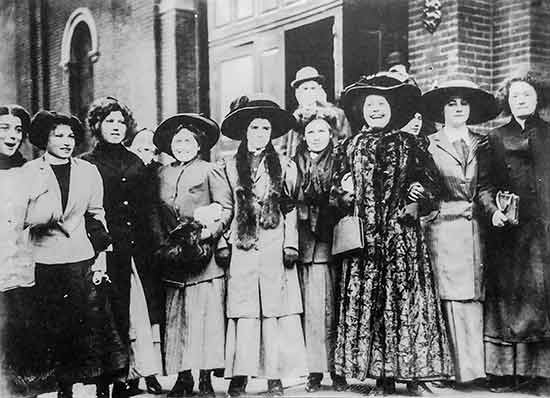 Group of women on strike

Women in New York’s labor organizations played an important role in the suffrage movement, arguing that female voters would help advance politicizes to protect working women. Protective legislation that gave women special treatment in the workplace — shorter hours, restrictions on working conditions — became a central goal for many working-class women activists. The shirt-waist workers pictured here marched as a part of the “Uprising of 20,000,” a New York strike to improve wages and unsafe conditions in sweater-shops and tenements. It took place in 1909, a year after the Supreme Court decided that special workplace rules for women were constitutional.

No female politician has broken more barriers than Hillary R. Clinton. In 2001 she became the first women elected to the U.S. Senate from the state of New York, and the first former First Lady ever to win public office. In 2008 Clinton was the first woman to appear as a presidential candidate on every state’s primary or caucus ballot and the first to win a major party’s state presidential primary, before ultimately losing the nomination to Barack Obama — and serving as his Secretary of State. In 2016 Clinton became the first women presidential nominee on a major party ticket, ultimately losing to Republican nominee Donald Trump. These campaign signs from the 2016 Democratic National Convention capture the historic firsts of Clinton’s candidacy.

Clinton’s wardrobe has been scrutinized during her decades-long presence in American public life. In particular, much attention has been paid to her preference for pantsuits. Clinton’s choice of clothing has also been deliberate — her wearing of a white pantsuit during her nomination acceptance at the Democratic National Convention invoked the suffrage movement. Clinton wore this teal silk suit when she was sworn in as New York’s junior senator in January 2001.

This presidential campaign poster references Eugene Delacroix’s famous painting Liberty Leading the People, which commemorates the Paris revolution of 1830. In this adaptation, Geraldine Ferraro is depicted as Lady Liberty and presidential candidate Walter Mondale carries an ERA flag, reinforcing both candidates’ support for women’s equality and the ERA.

Suffrage leader Carrie Chapman Catt shifted her focus to women’s club activism after the passage of the 19th Amendment. As founder and honorary president of the League of Women Voters, Catt sought to educate the newly enfranchised generation of women. Although the League was nonpartisan, Catt urged women to join political parties, believing women could not achieve full political equality until they were “as independent within the party as men.”

The campaign slogan Congresswoman Shirley Chisholm used in her run for President — “unbought and unbossed” — distinguished her as a candidate who hadn’t “sold out” to her party’s establishment.