Beyond Suffrage: A Century of New York Women in Politics at the Museum of the City of New York 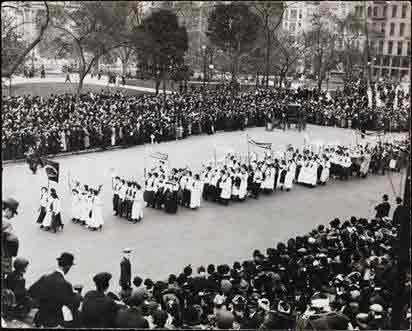 A Century of New York Women in Politics

The Museum of the City of New York invites members of the media to preview Beyond Suffrage: A Century of New York Women in Politics, a groundbreaking exhibition that traces women’s political activism in New York from the struggle to win the vote, through the 20th century, and into the fight for women’s rights in our own time. Beginning with the long battle for women’s voting rights that successfully culminated in 1917 statewide and 1920 nationally (though many women nationwide, particularly women of color, still faced challenges to casting their ballots), the exhibition highlights the remarkable women at the center of New York’s politics over the course of a century. It features a diverse range of activists, both familiar and lesser known, the battles they fought, and the many critical issues they championed.

“New York has always been at the epicenter of the fight for women’s rights, from the fight for woman suffrage in the early 20th century right on through today,” said Whitney Donhauser, Ronay Menschel Director of the Museum of the City of New York. “Beyond Suffrage celebrates New York’s role in the last 100 years of the women’s movement by bringing that history to life and connecting it to the present. We hope it will be as inspiring as it is informative.”

Beyond Suffrage: A Century of New York Women in Politics examines how women navigated New York politics in the 1920s through 1940s, often working behind the scenes to advance progressive causes related to health, labor, and good government; the central role of New York in the women’s liberation movement of the 1960s that redefined women’s roles in politics and government; and the ongoing campaigns for women’s political power and grassroots mobilizations that demand equal gender rights today.

Beyond Suffrage features rare artifacts, documents, costumes, photographs, magazine covers, and audio-visual materials spanning more than a century that show how women have been politicized—and in turn changed politics—in New York and beyond.