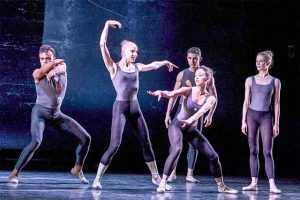 The program, showcasing the company’s commitment to artistic collaboration, will also include All That We See and Dear and Blackbirds. All pieces will be accompanied by live music performed by the ensemble Hotel Elefant.

The Company will present a preview of its season on Monday, October 19 at 7 pm as part of the Guggenheim Museum’s Works & Process series, followed by a discussion with company members, moderated by New York City Ballet principal dancer Tyler Angle. http://goo.gl/NvAV5L

BalletCollective will perform on Wednesday, November 4 and Thursday, November 5 at 7:30 pm.  Tickets range in price from $20 – $75; student tickets are available for $12 and are available online at nyuskirball.org, by phone at 212.998.4941 or in person at the NYU Skirball Center Box Office: Tuesday-Saturday, 12 – 6 pm.  NYU Skirball Center for the Performing Arts is located at 566 LaGuardia Place at Washington Square.  For more information visit: www.nyuskirball.org

New ballet 2 (to be named) is a new duet performed by David Prottas and Taylor Stanley, with music by Mark Dancigers and choreography by Troy Schumacher, with source art by Israeli photographer Dafy Hagai.

All That We See (2014) is a collaboration between artist David Salle, Troy Schumacher and Ellis Ludwig-Leone inspired by a series of images from a painting by Salle generated specially for this work. All That We See will feature company members Taylor Stanley, Lauren King, Claire Kretzschmar, David Prottas and Meagan Mann.

Dear and Blackbirds, (2014) a pas de deux, performed by Ashley Laracey and Harrison Coll and choreographed by Troy Schumacher to music by Ellis Ludwig-Leone, is based on a poem by Cynthia Zarin.

BalletCollective, founded by Troy Schumacher in 2010, brings together artists, writers, composers, choreographers, and designers to collaborate as equals through the creation of distinctive works of art. BalletCollective’s works are intimate and reflective yet accessible, featuring a highly accomplished group of dancers in works that are made for them. At the heart of BalletCollective lies process. Artists from different genres come together and express ideas that are important to them individually; but as a group – a collective – they’re encouraged to think outside of what it is they usually do. A composer considers visual art, a choreographer the structure of a poem, a photographer is inspired by the rhythm of a piece of music. This collective effort is combined and refined, and ultimately presented to audiences. Each work’s creative life does not end at performance, but continues to be re-conceived as long as the work continues to be performed. BalletCollective has had previous seasons at the Joyce Theater, Baryshnikov Arts Center, the Gerald W. Lynch Theater at John Jay, NYU Skirball Center and has an annual week-long residency at the Palm Theater in Telluride, Colorado. The Company has performed at the Fire Island Dance Festival, and made its Vail International Dance Festival debut this past summer. www.BalletCollective.com

Mark Dancigers (Composer) is a composer of chamber, orchestral, film, and solo instrumental works, and the electric guitarist for the new-chamber music group NOW Ensemble. Mark is forging a musical language that lives somewhere between pristine post-minimalism and hallucinatory romanticism. As the Artistic Director and guitarist for NOW Ensemble, he has brought music by some of the most exciting voices of his generation to both national and international recognition. http://dancigers.com

Hotel Elefant (Music Ensemble), founded by composers Leaha Maria Villarreal and Mary Kouyoumdjian, brings an awareness of today’s music to the general public through commissions, performances, and moderated discussions between composers, performers, and audiences. Committed to modern sounds and sonic explorations, this “audacious and unafraid” (New Music Box) ensemble highlights living composers who are blurring lines, pushing boundaries, and fostering creativity. With a flexible roster of more than twenty musicians, Hotel Elefant works closely with a broad spectrum of progressive artists including John Luther Adams, Richard Carrick, Michael Gordon, David T. Little, Angélica Negrón, and Chinary Ung. Past performances include Lincoln Center, Look and Listen Festival, and the Bang on a Can Marathon; and a debut Carnegie Hall performance praised by The New York Times as “deeply felt.” http://www.hotelelefant.org

Ellis Ludwig-Leone (Composer and Music Director) is a composer and the bandleader for Brooklyn-based San Fermin. Their self-titled debut album, released worldwide in the fall of 2013 via Downtown Records, was named as one of NPR’s “50 Best Albums of 2013,” and received rave reviews from The New York Times, The New Yorker, Pitchfork, NME, BBC and more. Downtown Records issued the band’s follow-up, Jackrabbit, worldwide in April 2015. The band has performed numerous shows and festivals throughout the world including Lollapalooza, Firefly, Festival d’Été, and Celebrate Brooklyn, and has shared the stage with The National, St. Vincent, Arctic Monkeys, and The Head and the Heart.  Ludwig-Leone has written for a wide variety of ensembles, including ACME, Alabama Symphony Orchestra, Colorado Music Festival Orchestra, Decoda, Fifth House Ensemble, Hotel Elefant, JACK Quartet, Metropolis Ensemble, and wild UP. He has worked closely with choreographer Troy Schumacher and BalletCollective, including on All That We See, a night of three ballets written in collaboration with artist David Salle and poet Cynthia Zarin, and Invisible Divide, which will premiere in November.  His latest collaboration with Schumacher will premiere at New York City Ballet on September 30. He was named the 2015 Composer-In-Residence for the Alabama Symphony, and has been a recipient of residencies from The MacDowell Colony, Banff Centre for the Arts, and the Við Djúpið festival in Iceland. http://www.ellisludwigleone.com

Paul Maffi (contributing artist) was born in London and raised in Italy – where his father Roberto instilled in him a love for photography from an early age.  Paul’s work frequently draws inspiration from his childhood memories, referencing the iconic pop culture of the 80s and 90s.  After studying photography at anniversary, he went on to fain four years of invaluable experience assisting the highly talented and charismatic photographer Phil Poynter.  Then, in 2008, Paul embarked on his own path which, to date, has seen him work with many of the fashion world’s top publications – including V Magazine, NY Times Style, Pop, Interview! and CR Magazine – and with influential editorial figures including Carine Roitfeld.  Paul has collaborated on various projects with BalletCollective for the past 3 years.  This is the first one entirely inspired by and for BalletCollective. http://www.paulmaffi.com

David Salle (Contributing Artist) helped define the post-modern sensibility by combining figuration with an extremely varied pictorial language. His paintings have been shown in museums and galleries worldwide.  Although known primarily as a painter, Salle’s work grows out of a long-standing involvement with performance. Over the last 25 years he has worked extensively with choreographer Karole Armitage, creating sets and costumes for many of her ballets and operas staged throughout Europe and America. In 1995, Salle directed the feature film Search and Destroy, starring Griffin Dunne and Christopher Walken. Salle is also a prolific writer on art. His essays and interviews have appeared in Artforum, Art in America, Modern Painters, The Paris Review, as well as numerous exhibition catalogs and anthologies. He currently writes a monthly column on art for Town & Country Magazine.  http://www.davidsallestudio.net

Troy Schumacher (Director and Choreographer) formed BalletCollective as a twenty-first century model inspired by historic ballet, music and visual art collaborative efforts. Its mission is to present ballet-based work in an intimate setting with live music that represents contributions from the choreographer, dancers, musicians and artists who engage in an ongoing give and take process. Schumacher has received choreographic commissions from New York City Ballet, Danspace Project, the 92nd Street Y Fridays at Noon series, Performa, School of American Ballet, New York Choreographic Institute, Salon/Sanctuary, and Atlanta Ballet. Schumacher is active in other cultural media and has participated in a number of collaborations including Carine Roitfeld’s CR Fashion Book, Aritzia and Creative Agency V Group’s Zero Zero Project, Sony PlayStation, and a recent photo spread in The New York Times Men Style Magazine.  As a dancer with the New York City Ballet, Schumacher has performed principal roles in a number of ballets, including George Balanchine’s A Midsummer Night’s Dream and Stars and Stripes, Peter Martins’ Swan Lake, and Jerome Robbins’ Four Seasons and Interplay. Schumacher choreographed and premiered his first ballet commissioned by the New York City Ballet in 2014, featuring music by Judd Greenstein and costumes by Thom Browne, and his new piece for the Company will premiere on September 30, 2015 featuring a new score by Ellis Ludwig-Leone and costumes by Marques’ Almeida. http://www.troyschumacher.com

Vanessa Upson (Vocalist) is a Peruvian-American singer-songwriter living in Brooklyn, NY. She releases music under the moniker Violetness, her electronic project. After a series of collaborations including Son Lux, Caroline Shaw, San Fermin, and Moon Boots, she is currently working on her debut album with composer William Ryan Fritch.

Cynthia Zarin (Resident Writer) is a poet, journalist, and children’s book author. Currently poet-in-residence at the Cathedral of St. John the Divine, she is also a long-time contributor to The New Yorker.  Her books of poetry include The Swordfish Tooth, Fire Lyric, The Watercourse (winner, Los Angeles Book Award) and The Ada Poems.  Zarin’s poetry for adults has been praised for its slightly offbeat perspective on mundane, typically overlooked topics, and her picture books for children, including Rose and Sebastian and What Do You See When You Shut Your Eyes?, encourage her preschool audience to look at things from a fresh perspective.  Zarin has received numerous awards for her work, including fellowships from the National Endowment for the Arts and the Guggenheim Foundation.

NYU Skirball Center for the Performing Arts is the premier venue for the presentation of cultural and performing arts events for New York University and lower Manhattan. Led by Executive Director Michael Harrington, the NYU Skirball mission is to showcase and support diverse and eclectic talent from around the world, while cultivating audiences for live performance through deeper engagement opportunities.