At the Society of Illustrators 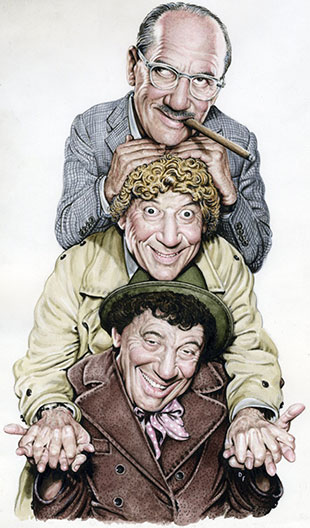 Image courtesy of the Society of Illustrators

The Society of Illustrators is proud to present a 2-floor gallery show of “Old Jewish Comedians”, showcasing Friedman’s original artwork from all three books, as well as early rough sketches and additional Jewish comedian-related art created by Friedman for book, print and DVD covers. Short biographies of each comedian will accompany each portrait. This will represent the most comprehensive display of original Drew Friedman artwork to date, containing over 110 illustrations. Also on display will be rare Jewish comedian ephemera from Friedman’s personal collection, including books, records, sheet music, advertisements, brochures, toys, games, buttons, cigar boxes, shoe laces, playing cards, magazines and comic books, some featuring art by the most popular illustrators of their day. The show is curated by BLAB! founder Monte Beauchamp, who curated the wildly successful Robert Crumb and Harvey Kurtzman shows for the Society of Illustrators.

The Old Jewish Comedian (OJC) books came about when Beauchamp asked Friedman to create a book for his line of BLAB! storybooks. When Friedman was asked what he’d most like to draw, he thought: “What do I enjoy drawing the most… old people, Jews and comedians. Bingo!… Old Jewish Comedians!” Beauchamp, who curated the recent wildly successful Robert Crumb and Harvey Kurtzman shows for the Society of Illustrators, will be curating the Old Jewish Comedian show.

The first OJC book was released in 2006 featuring a cigar chomping Milton Berle posed on the cover, and a foreword by Leonard Maltin, and instantly became a hit, garnering great reviews, (Steven Heller in the NY Times writing: “A festival of drawing virtuosity and fabulous craggy faces. Friedman might very well be the Vermeer of the Borscht Belt.”), and quickly went into a second printing. The book was also embraced by many of the old Jewish comedians themselves, including Larry Storch, Jerry Stiller, Freddie Roman, Mickey Freeman, Eddie Lawrence and none other than “the king of comedy” Jerry Lewis, who exclaimed: “Jesus Christ I love it! Holy Moly, what a book!”. Lewis would arrange for three Friars club “book-warming” parties to celebrate the OJC books, co-hosted by many of the comics themselves, including Freddie Roman, Mickey Freeman, Larry Storch, Jerry Stiller, Stewie Stone and none other than Abe Vigoda. Lillian Ross covered the second party in the “Talk of the Town” column for The New Yorker. Following the first book’s success, the publisher, Fantagraphics, released two more volumes, “More Old Jewish Comedians” in 2007, with a foreword by the late comedy writer Larry Gelbart, and “Even MORE Old Jewish Comedians” in 2011, featuring a foreword by comic Jeffery Ross.

The books were also embraced by many younger Jewish comedians, including Howard Stern, who exclaimed ” This book is great! Drew Friedman is something else!”, Gilbert Gottfried, Jeffrey Ross, Andy Kindler, Albert Brooks, and Sarah Silverman who Kvelled: “Drew Friedman isn’t just a brilliant artist. He takes you to a place. He takes you back in time. He makes you smell the stale cigarettes and cold brisket and you say, thank you for the pleasure”.

All three OJC volumes will be on sale at the Society of Illustrators in a new bound volume created exclusively for the show. Expect to see several of the legendary Jewish comedians at the opening celebration on March 6th!

Award winning artist Drew Friedman’s comics and illustrations have appeared in Art Spiegelman’s Raw, R. Crumb’s Weirdo, American Splendor, Heavy Metal, National Lampoon, SPY, MAD, The New Yorker, BLAB!, Time, Rolling Stone, The New York Times, The New York Observer, Entertainment Weekly, among many others, as well as numerous book covers and art created for Topps and SHOUT Factory. His work has been collected in five anthologies, the most recent, “TOO SOON?”. “Drew Friedman’s Sideshow Freaks” was published in 2011. Steven Heller in the The New York Times wrote of his three volumes of portraiture of “Old Jewish Comedians”: “A festival of drawing virtuosity and fabulous craggy faces. Friedman might very well be the Vermeer of the Borscht Belt”. His latest book of portraits, “Heroes of the Comic Books”, published by Fantagraphics with a foreword by Al Jaffee, will be released in July, 2014. Friedman’s 8-page comic strip “R. Crumb & Me”, detailing his friendship and association with the artist R. Crumb, will appear later this year in “Masterful Marks”, edited by Monte Beauchamp and published by Simon & Schuster. Friedman lives in rural PA with his wife and frequent collaborator K. Bidus.