At the Guggenheim Museum 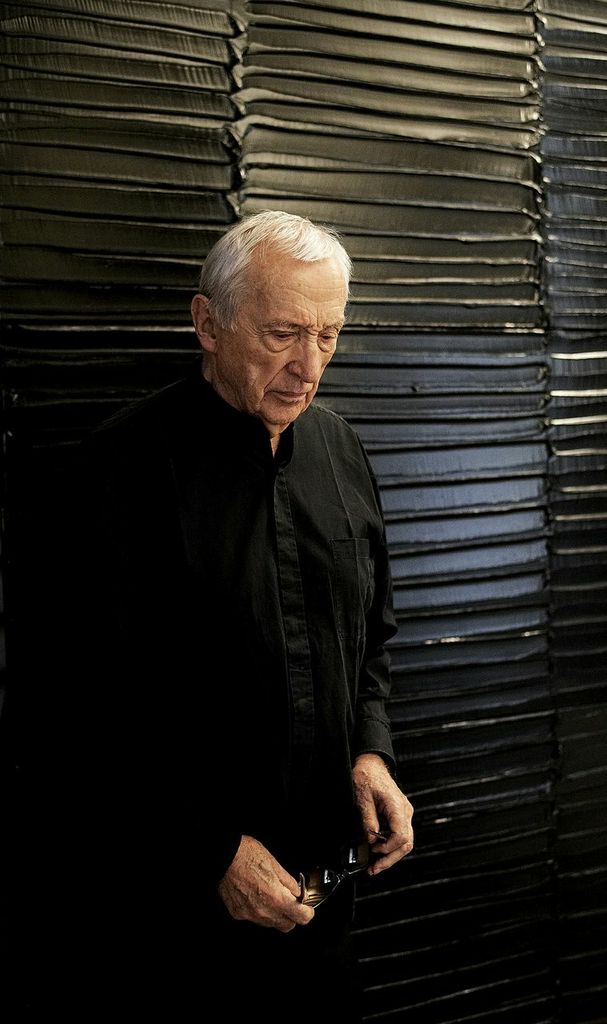 New York, NY…Beginning April 24th, 2014, Dominique Lévy and Galerie Perrotin will jointly present Pierre Soulages, the first American exhibition in ten years devoted to the most significant and internationally recognized living artist of France. The show will fill the historic landmark building at 909 Madison Avenue where both galleries reside, presenting a group of new large-scale paintings that reveal the rigor and atemporal power of a 94-year old master known as “the painter of black and light.” Born in 1919, Soulages is among the few artists still at work from the explosive postwar period when New York City emerged as the center of the art world, the place where American innovation and European traditions collided and coalesced into a new dominant school of gestural painting. By juxtaposing Soulages’ revelatory recent paintings with a group of his important postwar works, Pierre Soulages will highlight profound inter-connections between Europe and America in modern and contemporary art while challenging certainties on the subject.

On view through June 27th, Pierre Soulages introduces fourteen recent paintings from the artist’s ongoing Outrenoir series – metaphysically potent canvases with slashing black architectonics — alongside seminal works created in the 1950s and 60s, all on loan from major museums and important private collections. During the years following World War II, Soulages exhibited extensively in America, establishing friendships with New York peers Mark Rothko, Willem de Kooning, Robert Motherwell, and Helen Frankenthaler, among many others. His work thrived in the U.S. market, championed by James Johnson Sweeney, director of the Solomon R. Guggenheim Museum (previously curator at The Museum of Modern Art), and by legendary gallerist Sam Kootz. Perhaps it was Soulages’ feeling of belonging to no particular city or country that aided his success: He has said his only real language “was that of modern art,” and his undiminished fascination with that language continues to shape Soulages’ paintings today, enabling him to transmit light with black.

Pierre Soulages is accompanied by a catalogue featuring an interview with the artist by Hans Ulrich Obrist, and essays by John Yau and Alain Badiou. The exhibition coincides with the opening in late May of the Musée Soulages in Rodez, France, the artist’s birthplace. The new museum complex will extend the public presence of Soulages’ art in the Aveyron area of the Midi-Pyrénées region of Southern France, where in 1994 he completed a celebrated cycle of stained glass windows at the 8th century Romanesque Abbey-Church of Sainte-Foy in Conques. Encompassing 104 unique compositions in translucent glass, Soulages’ windows at Stainte-Foy are today considered an art pilgrimage destination.

The exhibition Pierre Soulages also coincides with release of the first major book devoted to the artist’s years of intense engagement with United States. Distributed by D.A.P., ‘Soulages in America’ explores the artist’s work in the 1950s and 60s, delving into his presence and prominence in the U.S. during the heyday of Abstract Expressionism, the central art movement of postwar America. Densely illustrated with archival photographs, letters, and images of the artist’s works of the period, ‘Soulages in America’ features an essay by Harry Cooper, head of modern art at the National Gallery of Art in Washington, D.C., as well as an extensive interview with Soulages by journalist Philippe Ungar. ‘Soulages in America’ examines a pivotal moment in the artist’s career and in doing so sheds light on Soulage’s ongoing Outrenoir paintings, the fruits of a highly independent trajectory. Soulages belongs to a generation for whom America was synonymous with a new world with a bold new spirit, for which he was quick to feel an affinity that remains in tact: “My attitude toward the history of painting was close to that of many young American painters, who weren’t bogged down by preconceived notions.”

About The Exhibition
In the 1940s, Pierre Soulages made abstract works predominately in black, which he has described as “both a color and a non-color.” He produced his first mature paintings in 1947, applying walnut stain in heavy brushstrokes on a light ground. In 1948, America came knocking unexpectedly at his door in the form of James Johnson Sweeney, who was intrigued by talk in Paris of a painter who worked in broad black marks. By the mid-1950s, Soulages was painting with looser, slashing brushstrokes and began incorporating fluid, subtle washes of color. He exhibited actively in New York and other cities in the United States, becoming part of a community of Abstract Expressionist artists channeling the spirit of the age into painting. Represented by the Kootz Gallery, Soulages attracted critical acclaim and drew the attention of avid private and museum collectors across the United States. His participation in Documenta I, II, and III (in 1955, 1959, and 1964, respectively) brought international recognition. But when Kootz Gallery shuttered in 1966, Soulages returned fully to Europe and to the next phase of his career.

In 1979, having already painted for over thirty years, Soulages made a dramatic break with his existing style and embarked upon a new approach to painting that he dubbed Outrenoir (the word outrenoir can be translated loosely from French as beyond black). By removing other colors and concentrating almost exclusively on black and its relationship with light, Soulages constructed a pictorial space that nevertheless stands opposed to the monochrome in the development of Modern art. Since this remarkable and deceptively radical mid-career shift of direction, Soulages has been exclusively devoted to Outrenoir and in it has located the locomotive of his output. Through Outrenoir he envisions a type of painting that can offer an immersive experience to the viewer, one that draws people in and engages them in the array of textures that light and shadow create on canvas. “When light is reflected on black, it transforms and transmutes it,” Soulages once said. “It opens up a mental field all of its own.”

Thus Outrenoir has been a continuous 35-year investigation into abstraction’s power to reorganize visual and psychological experience. Across the 1980s and 90s, and into the 21st century, and carrying the experience of postwar breakthroughs toward the present, Soulages has continued his investigation into the potential of gestural blackness. Works from Outrenoir have become part of the history of art, joining major museum collections in North America, Europe, Russia, and Asia. Fourteen new paintings from this grande série, made between late 2012 and early 2014, will serve as the centerpiece of Pierre Soulages.

Soulages has stated that his only desire has been to achieve the kind of pictorial presence he found in the caves of Lascaux and the menhirs of his birthplace, Rodez. The confident experimental strokes of the earlier works on view in Pierre Soulages reveal themselves as part of a clear progression toward Outrenoir’s evocations of chiseled stone, dark landscape and desiccated flesh. Among key examples on view in the exhibition are pictures form the 1950s, bearing the artist’s signature titles derived from the dimensions of his works – paintings such as ‘Peinture 195 x 130 cm, 2 juin, 1953’ (1953) and the beautiful ‘Peinture 195 x 130 cm, 1955’ (1955), which is on loan to the exhibition from the National Gallery of Art in Washington, D.C.  Soulages’ most recent paintings align him still with American Abstract Expressionism and the well-known American artists who were his postwar peers – figures who also built upon memories and biographical pre-occupations. For example, de Kooning never lost touch with his Rubensian women, nor did Clyfford Still lose his vivid connection with the Pacific Northwest and Canadian landscapes. There is a similar narrative undercurrent to Soulages’ newest work. Large-scale recent paintings on view in Pierre Soulages, including ‘Peinture 128 x 181 cm, 14 février 2012’ (2012), ‘Peinture 181 x 162 cm, 26 janvier 2014’ (2014), and ‘Peinture 293 x 165 cm, 23 décembre 2013’(2013), hint at memories of a hardscrabble youth spent in rural wartime France, in the harsh and beautiful country that is the Aveyron area. Such references are reduced by the artist’s brush to an extreme clarity that in turn suggests the transformation of suffering into transcendence.

About the Artist
In the duration and agelessness of his career, Pierre Soulages is an anomaly: He is a peer of Mark Rothko, Willem de Kooning, Barnett Newman and other the titans of postwar Abstract Expressionism, and yet is working alongside such significant present-day figures as Mark Grotjahn, Wade Guyton, and Christopher Wool.  Since his first retrospective exhibition in Hanover, Germany in 1960, Soulages’ oeuvre has been exhibited internationally without interruption, most recently with a major 2009 retrospective at the Centre Georges Pompidou in Paris as well as retrospectives at the Museum of Fine Arts, Houston; Museo de Arte Moderno, Mexico; Kunstmuseum, Berne; Seibu Museum of Art, Tokyo; Museum Fridericianum, Kassel; IVAM-Centro Julio González, Valencia; Musée d’Art Contemporain, Montréal; and the National Museum of Contemporary Art, Seoul. In 2001, Soulages became the first contemporary artist to be exhibited at the Hermitage Museum in Saint Petersburg, Russia.

A highlight of Soulages’ career came in 1986 with a commission from the French Ministry of Culture to create a cycle of stained glass windows for the Romanesque Abbey-Church Sainte-Foy in Conques, France. What Soulages achieved at Conques, over a grueling eight-year period ending in 1994, is nothing less than a total work of art. With the authorities’ decision to re-conceptualize all the windows, the church was purged of its World War II memories, for the windows had been filled by neo-medievalist scenes commissioned in the 1940s under Marechal Petain’s collaborationist government at Vichy. Soulages’ overall scheme effectively liberated the church’s astonishing architecture and transformed it into a site-specific installation. In the glass he developed for this project, Soulages found the perfect translucent vehicle – in essence, a transmogrified two-sided painting – that, as a soft and ever changing grey-white, is equally legible from inside and outside the church. In the 104 windows he created for Sainte-Foy, Soulages rendered a battery of straight and softly arcing black lines that engage the architecture and visitors’ movement through it, as well as the winds and mountains of the surrounding Aveyron. The Sainte-Foy cycle perfectly illustrates the central concern with light that has always suffused Soulages’ abstract paintings, and vividly affirms the strong architectonic urge that had always been present in the artist’s work.