Visit an online page to request an internet-enabled iPad which would be loaned out to students, who are without the necessary resources at home. You can visit this location within the NYC Department of Education website to fill out the Remote Learning Device Request form. Also, it’s stated there that teachers and school staff should use that same form to request devices on behalf of their students.

During today’s COVID-19 Mayoral Press Conference the subject of iPads furnished for students’ tele-schooling/distance learning was brought up. This would be a continuance to the initial declaration and followups beginning March 15 concerning the 300,000 devices to be loaned to students; and how NYC was working with Apple in acquiring them for those who most needed them while our schools were closed. 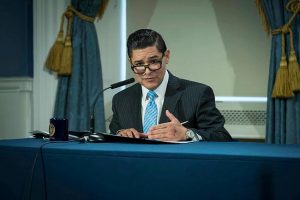 Mayor de Blasio mentioned how the administration was just finishing off the remaining orders due to be received by the city, “…yesterday I talked to the CEO Tim Cook, and the outstanding challenge was we needed 50,000 more the iPads to fulfill our order. We needed them really quickly to be able to meet our deadline of putting the iPads in the hands of each child by the end of April. I spoke to Tim Cook yesterday and he said, no matter what it takes, Apple will get those iPads to us in time.”

The mayor also gave thanks to the other companies involved in helping to set up such a system for tele-schooling.

Mayor: “T-Mobile has been supplying the LTE data plans. They’ve been great partners. We ask them to move quickly. They did. Thank you. IBM, setting up our iPads with apps and resources for learning. Everything we’ve asked, they’ve been doing. Thank you, IBM. Microsoft, Google, ProTech, creating apps and tools for learning. They’ve all again been willing to answer the call, answer it quickly, make sure that we could give a rich experience, a powerful experience to our kids. It’s not the same as being in a classroom, obviously, but we are trying to make it the very best it can be even if it’s distance learning. And then the folks who actually get the devices to our kids. And I want to not only thank the companies, but thank all the hard-working delivery workers. These folks are unsung heroes in this crisis and you don’t think to stop and thank the FedEx guy or the UPS guy, but just should because they’re actually helping things keep going and so many cases delivering vital supplies. So, thank you to FedEx, to UPS, to NTT and Deluxe, all of whom have been delivering these devices to our students. “

Mr. de Blasio also went on to thank our local libraries such as the Queens Library, the Brooklyn Library, and the New York Public Library for their part in assuring that certain necessary apps were installed on the iPads.

Asked about the number of devices which had actually been distributed, Schools Chancellor Richard Carranza responded: “So, the 175,000 devices – it’s a little over 175,000 – these are school-based devices that have been distributed. We’ve also now shipped a little over 70,000 iPads that are Wi-Fi enabled as well. Those are the specific numbers.”