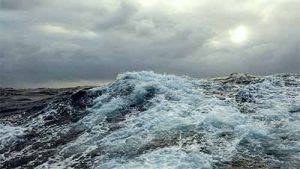 (New York, N.Y.) November, 24 2015—Antony Nagelmann leads a journey across the Atlantic Ocean in a sailboat and imparts the extreme experiences and emotion faced along the way in The Odyssey, which will be shown on Times Square’s electronic billboards from 11:57 pm to midnight from December 1 to 30. The footage was shot in Progressive HD taking advantage of the technology that only the signs in Times Square can offer. This project is a part of Midnight Moment, a monthly presentation by The Times Square Advertising Coalition (TSAC) and Times Square Arts.

The Odyssey depicts a personal journey taken by the artist across the Atlantic Ocean on the 1929 wooden sailboat The Blue Peter in the winter of 2013-2014. The film explores the meaning of the journey versus the goal through footage gathered by Nagelmann during his 39 days at sea. The Odyssey is divided into three channels to represent separate perspectives throughout the voyage – the preconceived fear and excitement, objective reality, and personal reality of the venture. Viewed simultaneously along with a fourth, immersive audio component, these channels allow the fullness of the transformative journey at sea to wash over viewers in Times Square.

On December 10, Nagelmann will be on site at a gathering that will begin at 11:30 pm on Duffy Square (46th Street and 7th Avenue) and culminate in the 11:57 viewing of the work.

Artist Antony Nagelmann, said, “While the idea of the journey as goal makes sense philosophically, I wanted to apply this to something real, something more than a meditation or thought. I wanted to feel it- to live it. Crossing an ocean in the winter seemed a good application. I have no intention to relay the notion of a single subjective perspective. Instead, my aim is to provide an explorative documentation of my experience, on several layers, so that the viewers may have their own experience; completely personal to them.”

Tim Tompkins, President of the Times Square Alliance, said, “Across age and art forms, the sea has played a careful role in literal and metaphorical journeys. Nagelmann’s fusion of nature and technology on the digital screens of Times Square is a striking and profound addition to this heritage.”

Sherry Dobbin, Times Square Arts Director, said, “Nagelmann’s ‘Odyssey’ is told across three video channels, each representing a distinct perspective of the journey: preconceived fear and excitement (vertical screens), the objective reality (horizontal screens), and the personal reality (multiple-channel signs). In this way, the artist has enabled the audience to experience and identify with the numerous narratives running through one’s mind while on the course of a transformative journey.”

Fred Rosenberg, President of the Times Square Advertising Coalition, said, “The committee unanimously thought that this universal experience of facing the unknown was the perfect selection for December – Nagelmann leads us into the New Year, where we strive to have courage and optimism.”

Antony Nagelmann studied film, painting, architecture, and business at university; that diversity of interests has persisted and grown throughout his career. While he began his work life art directing commercials in Los Angeles, his curiosity, restlessness, and vision have taken him to over 60 countries, in a variety of roles, but always exploring the narrative and spatial relationships between people, places and memories. He strives to communicate the integrity and significance of photographic images as expressions of human thought, imagination, and creativity. His commercial photography and directorial work includes clients such as Panerai, Vanity Fair, Saatchi and Saatchi and American Express, while his personal photography has been exhibited at the National Portrait Gallery and The Royal Photographic Society amongst many others. He lives between NYC and his farm in Upstate NY.