Annual Holiday Events for the 2018 Season at St. Bart’s 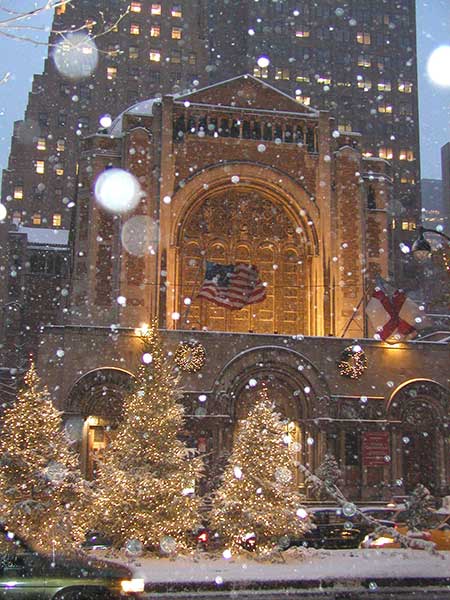 The December events presented by Great Music at St. Bart’s are among New Yorkers’ favorite holiday traditions: seasonal music in the beautiful spaces of St. Bartholomew’s Church.  A Joyous Christmas Concert (December 11) offers choral, orchestral, and organ music of the season along with a Christmas carol sing-in; Adoration of the Magi (December 14) is an intimate visual and musical celebration of the holidays in the St. Bart’s Chapel; and A Concert To Usher In the New Year( December 31), a holiday gift to the city, is a late evening organ concert and post-concert toast, that is free to the public (details below).

William Trafka, who since 1995 has been St. Bart’s Music Director and Organist as well as Artistic Director of Mid-Manhattan Performing Arts Foundation, the presenting organization of the Great Music at St. Bart’s series, will retire on November 4 of this year. Dr. Paolo Bordignon has been named Interim Organist and Choirmaster beginning Monday, November 5. In addition, Dr. Bordignon becomes Artistic Director of the Mid-Manhattan Performing Arts Foundation.

Dr. Bordignon will conduct A Joyous Christmas Concert on December 11, and perform A Concert To Usher In the New Year on December 31.

Paolo Bordignon previously served as St. Bart’s Associate Music Director from 2005 to 2014, and then served as the Director of Music at St. Paul’s United Methodist Church in Houston before recently returning to New York. He is harpsichordist of the New York Philharmonic and performs in 2018-19 with Camerata Pacifica, the Chamber Music Society of Lincoln Center, Santa Fe Chamber Music Festival, Orpheus Chamber Orchestra, St. Paul Chamber Orchestra, New Jersey Symphony Orchestra, ECCO, the Florida Orchestra, and a Trans-Siberian Arts Festival tour with the Sejong Soloists. He has been a frequent organ recitalist at the Metropolitan Museum of Art.

He has participated in festivals including Aspen, Bard, Bridgehampton, Grand Tetons, Mostly Mozart, and Palm Beach, as well as New York Fashion Week. He has collaborated with Renée Fleming, James Galway, Wynton Marsalis, Bobby McFerrin, Midori, Itzhak Perlman, and with composers Philip Glass and Elliott Carter as soloist in their concerti. Born in Toronto of Italian heritage, Dr. Bordignon is a graduate of St. Michael’s Choir School, the Curtis Institute of Music, and the Juilliard School. He is an associate of the Royal Conservatory of Music and a fellow of the Royal Canadian College of Organists.

Great Music at St. Bart’s, the concert series produced by the Mid-Manhattan Performing Arts Foundation (www.mmpaf.org), for the past seven years has presented music in St. Bartholomew’s Church, a parish of the Episcopal Diocese of New York located in the heart of midtown Manhattan.  The magnificent 1918 Romanesque-style church, a National Historic Landmark, features a portal designed by Stanford White and a grand Byzantine-style interior – and two of New York’s unlikely but outstanding concert spaces. The 150-seat chapel is an intimate and acoustically brilliant space perfectly suited for contemporary chamber music, and the majestic 1,000-seat sanctuary – outfitted with comfortable chairs enabling flexible seating –boasts an Aeolian-Skinner pipe organ that is the largest in New York City and one of the finest examples of the American Classic Organ in the U.S.

St. Bartholomew’s Church, the historic Episcopal parish on Park Avenue in New York City, was founded in January 1835, and this fall celebrates the 100th anniversary of the first service in its current location. Its present building, a Byzantine style structure with an iconic dome, designed by Bertram Goodhue and completed in 1918, has had a vital presence in New York for a century. St. Bartholomew’s also became a force in the musical life of the city and the wider church:  Legendary musicians such as Leopold Stokowski, who went on to a career as one of the world’s great conductors, Harold Friedell, and James Litton have served the church as Organist and Choirmaster. For many decades, a world famous weekly series of Evensongs featuring performances of the great oratorios by St. Bartholomew’s Choir was offered free of charge, stressing the parish’s commitment to inclusion by ministering to a wide community. Great Music at St. Bart’s, an outgrowth of these Evensongs, still offers the greater New York City community top shelf concert performances at very reasonable ticket prices.