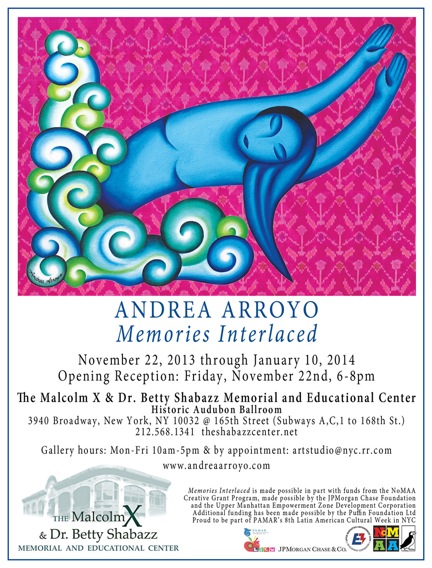 Free and open to the public.
http://theshabazzcenter.net/event/memories_interlaced_by_andrea_arroyo.html

The Malcolm X & Dr. Betty Shabazz Memorial and EducationalCenter is pleased to present “Memories Interlaced” an exhibition by renowned artist Andrea Arroyo, from November 22, 2013 to January 10, 2014.

Arroyo’s exhibit marries the elegant historical venue with bright contemporary art. The female-centered works are placed amid the striking plaster garlands, cherubs, and marbleized columns of the restored Audubon Ballroom – the Thomas Lamb classic built in 1912 and the site of the assassination of Malcolm X in 1965.

Arroyo uses garments collected from women in the community, such as a Mexican huipil and an Indian prayer shawl, -repurposed evocative personal items-, to examine notions of memory, belonging, and body image and to honor the resilience of the female spirit. The exhibit includes a painting of the Aztec goddess Coatlicue integrated with a hand-woven Mexican huipil; Ixchel, which depicts the Mayan Jaguar goddess integrated with a Guatemalan hand-woven skirt cloth; and Sarasvati, a work integrating the Hindu deity of the rivers and the arts with a silk wrap.

About the artist: Andrea Arroyo is an award-winning artist with an extensive trajectory. Her artwork is exhibited, published, reviewed and collected extensively and is in the permanent collections of The Library of Congress, The Smithsonian Institution, The National Museum of Mexican Art, The Richmond Museum and The New York Public Library, and is in many private collections in the US, Mexico, Europe and Japan. Ms. Arroyo was selected by President Clinton as Global Citizen Award Artist, additional honors include 21 Leaders for the 21st Century; Groundbreaking Latina in the Arts; Official Artist of the Latin Grammys; Outstanding Latina of the Year; Woman of the Week, Women in the World Foundation; and the New York City Council Citation Award for Achievement in Art. She has received multiple awards from New York Foundation for the Arts, the Northern Manhattan Arts Alliance, the Puffin Foundation and the Lower Manhattan Cultural Council.