American Sniper: The Story of Chris Kyle – a review

American Sniper: a review of the film

The Story of Chris Kyle 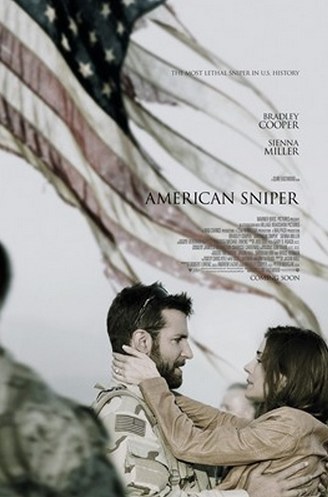 American Sniper tells the story of Chris Kyle, ‘the deadliest marksman in U.S. military history’ and is based on his autobiography: American Sniper: The Autobiography of the Most Lethal Sniper in U.S. Military History.

Anyone, like myself, who’s seen American Sniper without having read the autobiographical work by the same name might wonder in the end why does a man do four tours of duty? At least that’s what I was asking myself.

Then I remember the lesson or rather the moral Chris’ father tried to impart upon Chris and his brother as little boys. There they were at the dinner table as his father pulls out a belt ready to teach them a lesson since the boys earlier had gotten into a scuffle. One in which Chris’ brother was attacked and Chris jumped in to defend his brother. After the boys clarified what’d happened their father goes on about how ‘There are three types of people in this world: sheep, wolves, and sheepdogs.’ He then explains that the wolves are the evil predators of the world, whereas the sheep are the victims, and amongst them all are the sheepdogs, which are people gifted with the ability to protect the ‘flock’. He ends the lesson by clarifying how ‘we take care of our own’.

Apparently we’re to take the aforementioned lesson as the moral of the story, or rather the theme of Chris Kyle’s life in the military. One which we’re reminded of again in a scene much later in the film with Chris back home attending a BBQ with his family. It’s during this gathering that he catches sight of his son in a somewhat submissive role whilst playing with a dog. To any ordinary individual the interaction between the boy and the dog would’ve been nothing more than obvious harmless play; but to Chris, at that moment, it was something entirely different. Within a moment’s notice Chris was on the ground ready to strike the dog with his belt, but it was his wife’s screams that brought Chris back to planet earth, so to speak.

Honestly, it wasn’t until an hour after having finished the film that I’d made that connection; namely, fitting together Chris’ father, the belt and Chris at the BBQ with his own belt. Hence, it’s with that in mind that we come to recognize how the film makers wanted us to feel, not merely about Chris’ choices in life, but as well, what was going on in his mind. Although I can’t help but wonder about other causes and effects. Was there some sort of psychological correlation between Chris and others who might look upon their roles in war?…as if, War were a drug? A force through which one acquires meaning? But, Let’s face it, Chris did what he was good at. An expert sniper whose lethal skill saved lives. Regardless of how he’d gotten there; he’d come full circle in honoring the very words his own father instilled upon him as a child. Nevertheless, this should be a review of the film and not a critique of Chris Kyle’s decisions.

The film as a whole was very well put together in my opinion; but I’d have preferred more insight as to Chris’ life back home in between tours. Something which would’ve helped to better understand the strain placed on his marriage and whether or not his continued returns to service were as a result of the aforementioned moral or something else, or both?

Acting throughout was exemplary. Cinematography & Editing were more than adequate as well. I thought the film earned its right to be nominated for best motion picture of the year. As for Bradley Cooper’s nomination for best actor? I can’t say without having seen all of the other films containing nominated actors. There’s no question though that the scenes which I imagine were meant to be intense were very intense and then some. A film in my opinion which is truly worthy of a viewing.

Best Motion Picture of the Year:

American Sniper (Warner Bros.) [/fusion_builder_column][fusion_builder_column type=”1_1″ background_position=”left top” background_color=”” border_size=”” border_color=”” border_style=”solid” spacing=”yes” background_image=”” background_repeat=”no-repeat” padding=”” margin_top=”0px” margin_bottom=”0px” class=”” id=”” animation_type=”” animation_speed=”0.3″ animation_direction=”left” hide_on_mobile=”no” center_content=”no” min_height=”none”][Produced by Clint Eastwood, Robert Lorenz, Andrew Lazar, Bradley Cooper and Peter Morgan.] – This is the 11th nomination and the fifth in this category for Clint Eastwood. He won Oscars ® for Best Picture and Directing in1992 for Unforgiven and in 2004 for Million Dollar Baby. His other Best Picture and Directing nominations were for Mystic River (2003) and Letters from Iwo Jima (2006). He was also nominated for his leading roles in Unforgiven and Million Dollar Baby. He received the Irving G. Thalberg Memorial Award in 1994.

This is the third nomination for Robert Lorenz. His previous Best Picture nominations were for Mystic River (2003) and Letters from Iwo Jima (2006).

This is the first nomination for both Andrew Lazar and Peter Morgan.

Performance by an Actor in a Leading Role:

Bradley Cooper (“Chris Kyle” in American Sniper) – This is his third consecutive acting nomination and the second in this category. He is also nominated this year in the Best Picture category for American Sniper. He was previously nominated for his leading role in Silver Linings Playbook (2012) and for his supporting role in American Hustle (2013).

The Stanford Prison Experiment – by IFC Films – A Movie Review

The Stanford Prison Experiment - by IFC Films - A Movie Review The following is based not merely upon my having viewed the film but...
Read more
New York City / NYC

The Pieces: A 9/11 Conspiracy Told Through The Music of Ashlee Simpson

The Pieces: A 9/11 Conspiracy Told Through The Music of Ashlee Simpson March 6, 2020 The Pieces is a 9/11 conspiracy theory told through the music...

Opening for Back to the Table and Claytopian New York