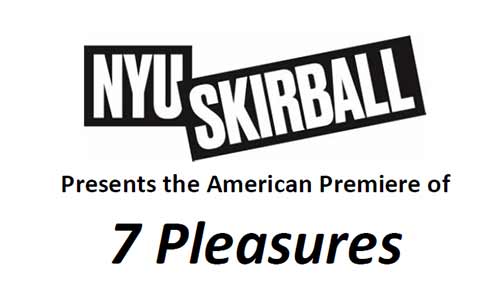 Presents the American Premiere of

An Exploration of Sexuality, Pleasure and Body Politics

New York, NY, (August 23,, 2017) – NYU Skirball will present the American premiere of 7 Pleasures, an exploration of sexuality, pleasure and body politics, choreographed by Danish choreographer Mette Ingvartsen, on September 29 and 30 at NYU Skirball.

Mette Ingvartsen is a Danish choreographer and dancer. Questions of kinesthesia, perception, affect and sensation have been crucial to most of her work, which includes several site-specific projects that have been seen around the world. Her works include 21 pornographies, to come (extended),  69 positions, The Artificial Nature Project, The Extra Sensorial Garden, and many more. Mette was artist-in-residence at the KAAITHEATER in Brussels from 2013 till 2016 and is currently part of the artistic team at Volksbühne in Berlin. She teaches and gives workshops often related to developing methodologies within choreographic practices. Since 2005 she has been working on “everybodys,” an ongoing collaborative project based on open source strategies, aiming at producing tools and games that can be used by artists to develop work.  http://www.metteingvartsen.net

Jay Wegman is responsible for the direction and leadership of the Center’s artistic programming. He previously served as director of the Abrons Art Center at Henry Street Settlement from 2006-2016, where he curated a balance of local, international, emerging and established multi-disciplinary artists. During his tenure, Abrons was awarded a 2014 OBIE Award for Innovative Excellence and a 2015 Bessie Award for Best Production. He also served as Canon for Liturgy and the Arts at The Cathedral of St. John the Divine for over a decade and was a Fellow at the John F. Kennedy Center for the Performing Arts in Washington, D.C. from 2004-2005. Jay is a graduate of Yale University.