A Visit to the AIDS at Home Exhibition

On the third floor of the Museum of the City of New York is an exhibition documenting, through photos, artwork, archived film and stories, the early days of the AIDS epidemic and the peoples touched by the crisis.

There is much that’s covered at this exhibition. Hanging off their walls are nods to the organizations and people who’ve participated in helping those afflicted with the disease. Amongst them would be:

One can find an image gallery further below of photos taken during our visit to MSNY. As well, are items which would better help you appreciate what’s to be found at this exhibition.

Following, is just one of a number of designs hanging off the walls along with the text from the adjoining placard. 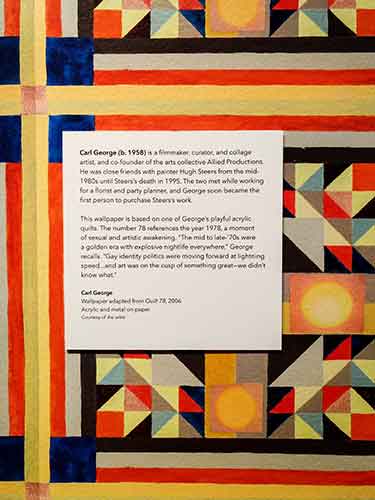 Carl George (b. 1958) is a filmmaker, curator, and collage artist, and co-founder of the arts collective Allied Productions. He was close friends with painter Hugh Steers from the mid-1980s until Steer’s death in 1995. The two met while working for a florist and party planner, and George soon became the first person to purchase Steers’ work.

This wallpaper is based on one of George’s playful acrylic quilts. The number 78 references the year 1978, a moment of sexual and artistic awakening. “The mid to late-‘70s were a golden era with explosive nightlife everywhere,” George recalls. “Gay identity politics were moving forward at lightning speed…and art was on the cusp of something great-we didn’t know what.”

Carl George
Wallpaper adapted from Quilt 78, 2006
Acrylic and metal on paper
Courtesy of the artist

AIDS At Home: Art and Everyday Activism
(As seen on the displayed Placard below) 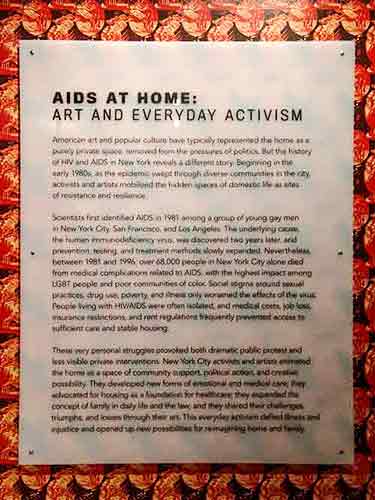 American art and popular culture have typically represented the home as a purely private space, removed from the pressures of politics. But the history of HIV and AIDS in New York reveals a different story. Beginning in the early 1980s, as the epidemic swept through diverse communities in the city, activists and artists mobilized the hidden spaces of domestic life as sites of resistance and resilience.

Scientists first identified AIDS in 1981 among a group of young gay men in New York City, San Francisco, and Los Angeles. The underlying cause, the human immunodeficiency virus, was discovered two years later, and prevention, testing, and treatment methods slowly expanded. Nevertheless, between 1981 and 1996, over 68,000 people in New York City alone died from medical complications related to AIDS, with the highest impact among LGBT people and poor communities of color. Social stigma around sexual practices, drug use, poverty, and illness only worsened the effects of the virus. People living with HIV/AIDS were often isolated, and medical costs, job loss, insurance restrictions, and rent regulations frequently prevented access to sufficient care and stable housing.

These very personal struggles provoked both dramatic public protest and less visible private interventions. New York City activists and artists animated the home as a space of community support, political action, and creative possibility. They developed new forms of emotional and medical care; they advocated for housing as a foundation for healthcare; they expanded the concept of family in daily life and the law; and they shared their challenged, triumphs, and losses through their art. This everyday activism defied illness and injustice and opened up new possibilities for reimagining home and family.

Caretaking
(As seen on the displayed Placard below) 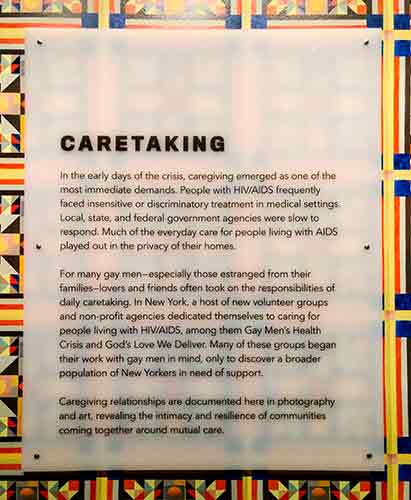 In the early days of the crisis, caregiving emerged as one of the most immediate demands. People with HIV/AIDS frequently faced insensitive or discriminatory treatment in medical settings. Local, state, and federal government agencies were slow to respond. Much of the everyday care for people living with AIDS played out in the privacy of their homes.

For many gay men — especially those estranged from their families–lovers and friends often took on the responsibilities of daily caretaking. In New York, a host of new volunteer groups and non-profit agencies dedicated themselves to caring for people living with HIV/AIDS, among them Gay Men’s Health Crisis and God’s Love We Deliver. Many of these groups began their work with gay men in mind, only to discover a broader population of New Yorkers in need of support.

Caregiving relationships are documented here in photography and art, revealing the intimacy and resilience of communities coming together around mutual care.