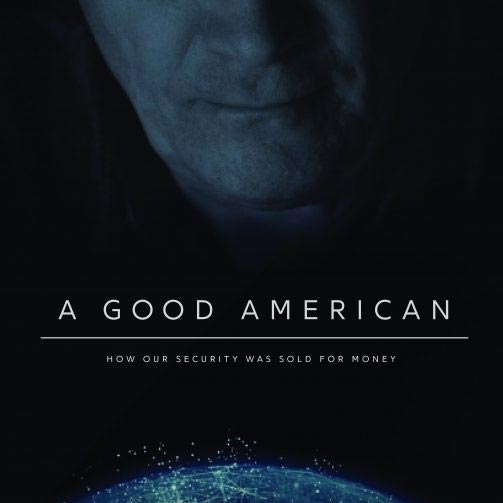 Anyone who’s been living under the proverbial rock for the past ten or so years may be thrown off balance after a first viewing of this documentary considering all the many codenames and characters being flung out. Although, I for one surely haven’t been oblivious to all the goings on in our modern post 9/11 world of intelligence and such, and yet, it took a second viewing for me to absorb all that was being said on the screen. It’s after viewing #2 that it all came together for me. Was it worth seeing a second time? Without question! I’m even preparing for a third viewing.

There’s no question this film is a compelling and gripping tale; the kind of film methinks every single American and dare I say, every citizen of the world should see.

I’ve never been keen on the idea of spoilers in a review, but then I’m not so sure if that notion even applies when it comes to documentaries. Regardless, I’d advise a brief review of the story itself prior to a viewing. I myself will be borrowing from external sources as well as the film itself for the sake of doing my part in helping you along.

A Good American takes us on a journey through William Binney‘s three decades worth of service at the National Security Agency (NSA); a description for which you’ll find further down on this page. Binney, heralded as one of the greatest code-breakers and mathematicians to ever work for the agency helps us along through the 100 minutes of film in understanding the progression of and paths taken by this agency and how it all culminated in the agency’s burying of key intelligence information which could’ve prevented the attacks of September 11, 2001. Now mind you, when I say ‘culminated’ I suppose I’m referencing the end of this one particular chapter of the agency’s history; of course there’s no doubt that 9/11 opened up a brave new world of surveillance powers. One need not search far for clues as to how that came about; something touched upon in the film.

As for the relevance of 9/11 to the NSA and Mr. Binney’s own departure from the NSA shortly thereafter, parallels are drawn between the events of that fateful day and the experiences of Binney early in his career; insights arrived at by him as to enemy movements during the Vietnam War and what he would call the “philosophy of the arrogance of power”, a reference to how his own counsel was ignored by top military officers in particularly crucial battles. Acts which would cost thousands of lives.

A surveillance program partly created by Mr. Binney in the 1990s would go by the name, “Thin Thread”. This project, which Binney and his co-creators would have great faith and pride in would be one which collected intelligence on a massive scale whilst using a technique allowing for the encryption of sensitive privacy data, thus complying with any legal concerns. In the words of Binney himself: “We were building the most powerful analysis tool that’d ever been developed in history…to monitor basically the entire world…in real time…was like the KBG or the Stasi on Super Steroids…”

Relatedly speaking and in reference to the previous paragraphs, It’d be wrong of me to not mention the curious subtext hinted at when it came to any ulterior motives, that is, the intentions behind the thinking at the NSA when it came to dropping the ‘Thin Thread’ project merely weeks prior to 9/11 and the insinuated cash-cow created following that day. Or to cite Thomas Drake‘s recollection of his former boss: Maureen Baginski who reportedly said “9/11 was a gift to the NSA, we’re gonna get all the money we need and then some… We’ll milk this cow for 15 years”. Thomas Drake would be another NSA executive who worked with Binney for some time.  Reading this and listening to those words conjures up in my mind the images of President Dwight D. Eisenhower’s speech given on January 17, 1961 wherein he made mention of the “Military Industrial Complex.”

“Thin Thread” had proven itself as a truly cost effective procedural method of obtaining the data necessary for the securement of our nation and that of the world. Unfortunately, as previously mentioned, it would see its demise weeks prior to 9/11 when it would be replaced with a more burdensome and intrusive, and less effective project by the name of TrailBlazer. This would be carried out at the behest of NSA director Michael Hayden. William Binney would soon leave the NSA and the billions of dollars would flow into and through the failed program(s) which did nothing to stop the greatest attack on American Soil since the attack on Pearl Harbor.

There’s so very much more to this entire story that it’s almost mind-boggling. One can spend days and weeks tracking down all the documented information, sifting through the countless articles and write-ups, and breaking down the cast of characters involved in the days prior and following 9/11. This surely isn’t the place for me to be taking a stab at such an endeavor. Nonetheless, I’ve listed below a list of links relevant to all that’s been discussed and then some. I hope you’ll seriously consider looking through these sources and doing your own due diligence.

As I’d mentioned, A Good American should be required watching. The film overall is a truly gripping and compelling one. It’s also the sort of story which I could easily imagine Oliver Stone making a film about. Not that he hasn’t already. Snowden comes to mind; and it’s one which William Binney played a part in as a consultant. Honestly though, I foresee enough material in this story for numerous films. I only hope that, if and when they’re made, they do us, the citizens of this nation, and of this world justice. A more amazing happening at the time of this writing is, aside from the timeliness of this film’s release, how more and more intelligence subjects are coming to the news media forefront. From supposed Russian hacking to President Obama’s move to open the NSA’s trove of warrantless data to the entire intelligence community. A move carried out merely days before Donald Trump’s inauguration as the 45th American President. I’ve yet to make sense of the thinking behind the move; especially when considering the contradictory conclusions arrived at by the numerous talking heads; and I assure you it’s not something which has had a place on the front pages of newspapers. All I and the rest of you can hope for is a greater discussion of what’s going on within these intelligence agencies and how the impact they might be having on security measure up against the general public’s privacy and the rule of law. Then there’s also the matter of quantum computers and the huge race going on towards creating a full fledged version…something which will sure as heck factor into all of this; but that’s a subject for another day. Thank you for having read this far.

More About the NSA:

After viewing and comparing the descriptions provided at Wikipedia’s NSA page and the Official NSA site I opted for Wikipedia’s. They did such a better job methinks.

The National Security Agency (NSA) is an intelligence organization of the United States government, responsible for global monitoring, collection, and processing of information and data for foreign intelligence and counterintelligence purposes, a discipline known as signals intelligence (SIGINT). NSA is concurrently charged with protection of U.S. government communications and information systems against penetration and network warfare.  Although many of NSA’s programs rely on “passive” electronic collection, the agency is authorized to accomplish its mission through active clandestine means, among which are physically bugging electronic systems and allegedly engaging in sabotage through subversive software. Moreover, NSA maintains physical presence in a large number of countries across the globe, where its Special Collection Service (SCS) inserts eavesdropping devices in difficult-to-reach places. SCS collection tactics allegedly encompass “close surveillance, burglary, wiretapping, breaking and entering”.

In association with: El Ride Productions