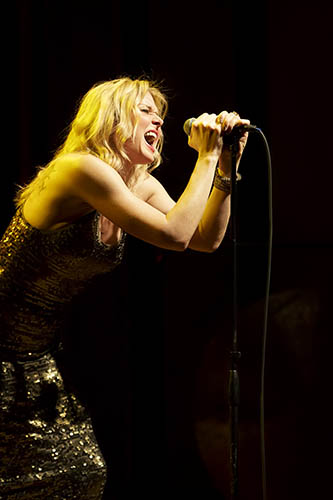 Trains: N or W to 8th Street or 6 to Astor Place

Storm Large will be returning to Joe’s Pub, Monday, May 13th at 7pm, after her debut at Carnegie Hall, May 9th, with the Detroit Symphony Orchestra as part of the Spring for Music Festival.

Storm Large returns to Joes Pub for her Official Carnegie Hall After Party!

Award winning singer, author, playwright, and performer of Wikepedian proportions…. Storm Large wants to let her hair down after her Carnegie Hall Debut. Having been personally invited to perform Kurt Weill’s “Seven Deadly Sins” with the Detroit Symphony Orchestra for the Spring For Music Festival on May 9, 2013, Storm would like to celebrate by stepping onto one of her other favorite stages in NYC….Joe’s Pub.

Storm has been singing and slinging hilarious banter around the globe for two decades, with her own band, and recently with Pink Martini. Playboy called her a “Punk Goddess” The Times UK called her an “intoxicating mix of power and vulnerability”…”The twisted love child of Mae West and Keith Richards” said NYT best selling author, Chelsea Cain.

Her one woman show “Crazy Enough” ran for an unprecedented and completely sold out 21 week run in her hometown of Portland Or, and garnered rave reviews in UK (Edinburgh Fringe Festival) and Australia (Adelaide Cabaret Festival). Storm is planning an off Broadway run of the show in the near future (and in all her free time). Her book,”Crazy Enough, A Memoir” (Simon and Schuster) got amazing reviews including Oprah’s book of the week, and just won The Oregon Book Award for Creative Nonfiction.

A graduate of The American Academy of Dramatic Arts in NYC, Storm was convinced she would never be an actress or a Broadway performer…the very idea made her cringe. More Joey Ramone than Judy Garland, she headed west and got her start in dark gritty rock clubs in Northern California, then around the US and Canada.

After moving to Portland, OR. ten years ago,(to become a chef) she started a band called The Balls, a loungecore cabaret act, that grew to cult status almost immediately. Shortly there after, she was tapped to compete on the 2006 CBS singing competition, “Rockstar, Supernova” and made it to the second to last round. After those insane three months on national television, Storm did the unthinkable. She stuck her toe back into the theater. She starred as Sally Bowles in Cabaret at Portland Center Stage, and Geva Theater in RochesterNY. Both cities gave her glowing reviews, and, suddenly, Storm kinda liked the theater. After she wrapped up her 24 shows in 26 days in Edinburgh, she spent three months performing for Randy Newman in his revue: “Harps and Angels” with Katey Segal and Michael McKean.

Since tip toeing back, liking a little and then LOVING theater, Storm has begun singing with her beloved home orchestra OSO, and her shows are a mad fun sold out smash, every time. Combining her comedy, huge voice and massive musical vocabulary, Storm has found a home in the symphony world. Along with Oregon and Detroit, he has also sung with The Royal, National, Lyon and Pacific Youth Orchestras (to name a few) with Pink Martini.

This will be her first time ever setting foot in Carnegie Hall, let alone performing on that storied stage, and she is ready.

She has been described as a “young Bette Midler”,”A six foot Vargas pin up come to life” and most commonly, “a force of nature.” And Yes, Storm Large is her real, honest to goodness birth name….so it certainly fits.

You don’t want to miss the victory lap of this wild child gone good, going great. See you out there.

Videos and Music available at WWW.STORMLARGE.COM