WORKS BY DUCHAMP, MATISSE, PICASSO, CÉZANNE, GAUGUIN, AND
VAN GOGH ON DISPLAY AT NEW-YORK HISTORICAL SOCIETY EXHIBITION
THE ARMORY SHOW AT 100: WHEN NEW YORK EXPLODED INTO THE MODERN WORLD ON VIEW OCTOBER 11, 2013 – FEBRUARY 23, 2014 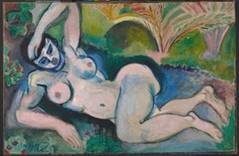 NEW YORK, NY, December 7, 2012 – In fall 2013, the New-York Historical Society will present a major exhibition celebrating the centennial year of the legendary 1913 Armory Show. On view from October 11, 2013 through February 23, 2014, The Armory Show at 100: When New York Exploded into the Modern World brings together iconic works by European modernists such as, Marcel Duchamp, Henri Matisse, Francis Picabia, Constantin Brancusi and Pablo Picasso with works by the “triumvirate” of precursors to modernism—Paul Cézanne, Paul Gauguin, and Vincent Van Gogh—in an exploration of how the Armory Show inspired seismic shifts in American culture, politics, and society. The exhibition will include a diverse cross-section of the American masterworks, such as impressionist Childe Hassam, urban realist Robert Henri, and visionary Albert Pinkham Ryder, who are often overlooked in accounts of the event despite the fact that about half the works included in the exhibition were by American artists.

Officially known as the 1913 International Exhibition of Modern Art, the Armory Show is widely acknowledged as one of the most important exhibitions held in the United States and is remembered as a turning point in the history of American art, introducing the European avant-garde to America. This examination of the Armory Show will be the most comprehensive exhibition about the event in 2013, offering a unique opportunity during the centennial year to experience the reunion of approximately ninety masterworks from the show.

The Armory Show at 100 also will contextualize the event with artifacts, historical documents, and archival photographs to evoke the social and intellectual currents of this time period, with major events including the inauguration of Woodrow Wilson as president in 1913, Americans marching for suffrage, the re-opening of Grand Central Terminal as the world’s largest train station, and the Woolworth Building becoming the world’s tallest skyscraper. The behind-the-scenes story of the making of the 1913 Armory Show also will be told through a selection of letters, postcards, and photographs that document the dissent and divisions that the exhibition inspired in the New York art world.

“It will be a great thrill to experience the reunion of iconic artworks and honor an event that forever changed the art world,” said Louise Mirrer, President and CEO of New-York Historical. “The New-York Historical Society will present this exhibition with an interdisciplinary display that evokes the social and intellectual currents of New York in this time period.”

Curated by New-York Historical’s Marilyn Kushner, Curator and Head, Department of Prints, Photographs, and Architectural Collections; and Kimberly Orcutt, Henry Luce Foundation Curator of American Art, The Armory Show at 100 will begin by setting the scene of the art world in 1913 with examples of paintings exhibited that year at the National Academy of Design, a bastion of conservative taste, as well as examples of Old Master works that New Yorkers collected. Approximately ninety masterworks from the 1913 Armory Show will follow this vignette, powerfully illustrating the transition from the past to the future, and the impact of the avant-garde on American audiences.

Duchamp’s Nude Descending a Staircase (No. 2) (1912) was considered scandalous and was roundly mocked by the media of the day, such as in a March 1913 Cubist-inspired cartoon in The Evening Sun newspaper, seen in reproduction in the show, that depicted “The Rude Descending a Staircase (Rush Hour at the Subway).” Many works on view initially shocked 1913 audiences but are now considered masterpieces, such as Matisse’s Blue Nude (1907), which was seen as immoral and depraved. Although Matisse’s work was more clearly representative than that of Duchamp, it was nonetheless perceived as childlike and primitive, and an attack on traditional standards of beauty. Picabia’s fragmented Cubist painting Dances at the Spring (1912) was compared to a patchwork quilt.

Anticipating that the avant-garde works might shock or confound American audiences encountering new styles for the first time, the organizers of the original Armory Show included work by Post-Impressionists and other once-revolutionary artists that were acclaimed as great masters by 1913. Organizers hoped that this juxtaposition would help viewers understand that artworks that are once considered revolutionary and outrageous are often later accepted and understood. Gauguin’s Tahitian paintings, including Words of the Devil (1892), were met with some controversy, but many considered them more resonant with modern life than the work of Cubists and Fauves. Some became quite well-regarded by American audiences, as seen with Cézanne’s View of the Domaine Saint-Joseph (late 1880s) which became the first of the artist’s works in an American museum when it was purchased from the show by the Metropolitan Museum of Art.

The Armory Show featured a number of American artists who were leading figures of the Ashcan School. John Sloan often captured scenes of working class men and women on the Lower East Side, such as Sunday, Women Drying Their Hair (1912). Robert Henri’s life-sized oil painting Figure in Motion (1913) may have been created in contrast to Duchamp’s nude, as a sort of rebellious manifesto to challenge the Armory Show organizers. John Marin’s watercolor series of Manhattan buildings included abstract studies of the Woolworth Building, which was the world’s tallest building when it was finished in 1913.

A fully-illustrated scholarly catalogue will be produced in conjunction with The Armory Show at 100, re-examining the 1913 exhibition and its historical and cultural context. Edited by curators Marilyn Kushner and Kimberly Orcutt, along with Senior Historian for the Armory Show and Professor of History and American Studies at Columbia University Casey Blake, the accompanying catalogue (Giles, October 2013) will feature thirty-one essays from a range of prominent scholars, shedding new light on the artists represented, the public reception of the works, and how the media responded to this legendary exhibition.

Timed to the centenary of the event, New-York Historical will launch a special Armory Show website in February 2013, with content to include the layout of the original Armory Show galleries, audio and video commentary, film and music clips, and interactive features.

New-York Historical also will present a number of educational programs, including scholarly conferences at New-York Historical (November 9, 2013) and in Paris (details to be announced) that will explore how the Armory Show influenced the relationship between American and European modernism. Other educational activities will include “The Art of History” K-12 student workshops designed to embed art and history education in the NYC public school curriculum, teacher professional development sessions, and curriculum materials.

Support for The Armory Show at 100

The New-York Historical Society recognizes Harold Newman for generously providing lead sponsorship and a challenge grant in support of this exhibition. The Armory Show at 100 was made possible, in part, by the Terra Foundation for American Art, the Institute of Museum and Library Services, and the National Endowment for the Arts. Support for the development of The Armory Show at 100 web resource has been provided by a grant from the National Endowment for the Humanities.

About the New-York Historical Society

The New-York Historical Society, one of America’s pre-eminent cultural institutions, is dedicated to fostering research and presenting history and art exhibitions and public programs that reveal the dynamism of history and its influence on the world of today. Founded in 1804, New-York Historical has a mission to explore the richly layered history of New York City and State and the country, and to serve as a national forum for the discussion of issues surrounding the making and meaning of history.

New-York Historical is recognized for engaging the public with deeply researched and far-ranging exhibitions, such as WWII & NYC, Alexander Hamilton: The Man Who Made Modern America; Slavery in New York; Drawn by New York: Six Centuries of Watercolors and Drawings at the New-York Historical Society; Grant and Lee in War and Peace; Lincoln and New York; Nueva York (1613 – 1945); and Revolution! The Atlantic World Reborn. Supporting these exhibitions and related education programs is one of the world’s greatest collections of historical artifacts, works of American art, and other materials documenting the history of the United States and New York.

There are no upcoming events.