BY ARTIST UGO RONDINONE TO BE DISPLAYED AT 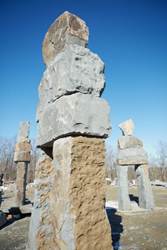 For seven weeks this spring, nine 16-to 20-foot-tall, human-shaped stone figures by Swiss-born, New York-based artist Ugo Rondinone, will transform Rockefeller Center, inhabiting the plaza between 49th and 50th Streets and 5th and 6th Avenues in Manhattan, as if transported from another time. The work, Human Nature, will be free to the public and on view from April 23 through June 7, 2013. Presented by Nespresso, the exhibition is organized by Public Art Fund and Tishman Speyer.

Human Nature is a stark contrast to its highly developed architectural surroundings in Midtown Manhattan. The irregular natural surfaces of the stone are left bare, while the human figure—perhaps the original artistic subject—is represented as a simple yet imposing composition, defined by its towering legs, massive torso, and boulder-like head. Archaic and enduring forms, these colossal figures will invite visitors to wander amongst their legs and touch their rough-hewn surfaces.

To create these nine unique figures, the artist quarried massive bluestone slabs, leaving their surfaces as they were found: heavy and coarse, scored by quartz veins, and marked by wind, weather, and erosion. The stones were then rough-cut into blocks and stacked on top of each other to resemble the most recognizable features of the human form.

For more than 20 years, Rondinone has produced a diverse body of work that includes mandala paintings, figurative sculptures, large-scale landscape drawings, and immersive multi-channel video installations. In recent years he has increasingly turned his attention to public projects. His rainbow neon sign sculpture, Hell, Yes!, adorned the façade of the New Museum on the Bowery from its opening in November 2007 until December 2010.

Since 1998, Public Art Fund and Tishman Speyer have collaborated to present internationally acclaimed works of art to the millions of people who visit and work at Rockefeller Center. Recent projects include Anish Kapoor’s Sky Mirror in 2006, which received the award for “Best Show in a Public Space” by the U.S. Art Critics Association, Jonathan Borofsky’s monumental sculpture Walking to the Sky in 2004, and Chris Burden’s What My Dad Gave Me in 2008, a 65-foot tall skyscraper made up entirely of construction parts . In 2003, Takashi Murakami’s Reversed Double Helix featured Mr. Pointy, his largest freestanding sculpture to date, two giant floating balloons suspended over the center, and mushroom seating. Nam June Paik’s Transmission broadcast a nightly laser display around the plaza in the summer of 2002. In 2001, Louise Bourgeois presented three massive bronze spiders, including the 30-foot-tall Maman, which was preceded in 2000 by Jeff Koons’ monumental topiary Puppy, which blossomed at the foot of 30 Rockefeller Plaza.

Human Nature is on view in Rockefeller Center Plaza in Midtown Manhattan between Fifth & Sixth Avenues and 49th and 50th Streets.

Tishman Speyer is one of the leading developers, owners, operators, and asset managers of first class real estate worldwide. Active across North America, Europe, South America and Asia, Tishman Speyer is relied upon by many of the world’s most prestigious corporations to meet their office space needs. As of September 30, 2012, the firm has acquired, developed and/or managed a portfolio of over 125 million sq. ft. with a total value of over USD $61.3 billion since its founding in 1978. Signature assets include New York’s Rockefeller Center and the Chrysler Center, Sao Paulo’s Torre Norte, Ventura Corporate Towers in Rio de Janeiro, and Opernturm in Frankfurt. Tishman Speyer also has projects at different stages of development currently in Brasília, Chengdu, Frankfurt, Gurgaon, Hyderabad, Paris, Rio de Janeiro, São Paolo, San Francisco, Shanghai, Suzhou and Tianjin.

Public Art Fund is a non-profit organization supported by contributions from individuals, foundations, corporations and, in part, with funds from government agencies, including the New York City Department of Cultural Affairs in partnership with the City Council.

Ugo Rondinone (b. 1964, Brunnen, Switzerland) lives and works in New York. For more than 20 years, he has worked in a diverse range of mediums, including painting, drawing, photography, video, and sculpture, to explore notions of emotional and psychic profundity found in the most banal elements of everyday life. Rondinone studied at Universität für angewandte Kunst, Vienna, from 1986-1990. He has been the subject of major solo exhibitions at the Aargauer Kunsthaus, Aarau, Switzerland (2010); Museo de Arte Contemporáneo de Castilla y León, Spain (2009); Museo du Louvre, Paris (2009); Institute of Contemporary Art, Boston (2008); Sculpture Center, New York (2008); Whitechapel Gallery, London (2006); Museum of Contermporary Art, Sydney (2003); Musée National d’Art Moderne, Centre Georges Pompidou, Paris (2003); and Kunsthalle, Vienna (2002). In 2007, he represented Switzerland in the Venice Biennale. His works are in the collection of the Museum of Modern Art, among many others.

Nestlé Nespresso USA is the pioneer and reference for highest-quality portioned premium coffee. Headquartered in Lausanne, Switzerland, Nespresso operates in more than 50 countries and has more than 7,000 employees. In 2011, it operated a global retail network of 270 exclusive boutiques. For more information visit the new Nestle Nespresso corporate website: www.nestle-nespresso.com.