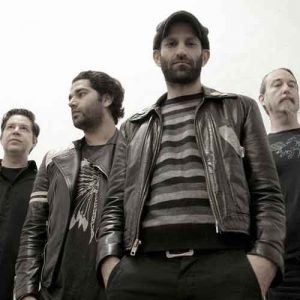 Zerobridge is here to bring you back to the six-string glory days of your misspent youth.

Straight out of the gate, first single “Closer” immediately digs its way into your rock’n’roll psyche. It’s the song in that fever dream you once had where you’re hanging out with Paul Westerberg and Alex Chilton, smoking cigarettes and watching the ’87 World Series in an old Bowery flophouse. Finally Westerberg pulls a cassette from his pocket, looks at you, and says, “I gotta play you this.”

Brothers Mubashir “Din” Mohi-ud-Din (singer, songwriter, rhythm guitar) and Mohsin “Moh” Mohi-ud-Din (drums), originally from DC/ Maryland, and whose parents emigrated from the disputed territory of Kashmir, found themselves in New York City’s Lower East Side in the early 2000s. And like many of their contemporaries, they ultimately formed a band, rocking their set from club to club and just missing those bigger opportunities on the horizon.

Thirteen years is a haul, no matter how you slice it, and zerobridge’s new album, Louder Than All Your Words (Carte Blanche Records, out March 3rd, 2017) is the payoff – a culmination of perseverance, desire, and straight-up New York hustle.

Joined by accomplished bassist Greg Eckelman who has been with the boys since the early days and legendary New York gunslinger, Strokes guru, and producer JP Bowersock, zerobridge is here, and they’ve brought the goods.

Learn more about this event here…