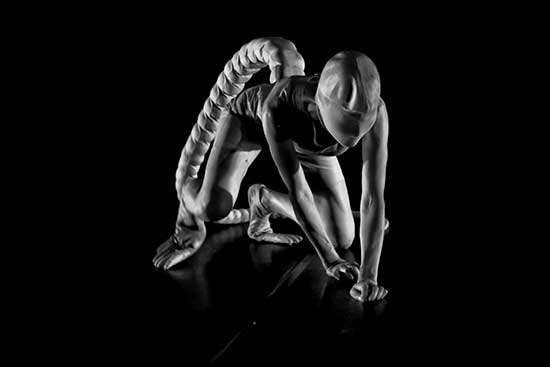 Triskelion Arts, in association with Vangeline Theater and The New York Butoh Institute, presents Yumiko Yoshioka in 100 Light Years of Solitude on Tuesday, May 1, 2018 at 8pm at Triskelion Arts, Muriel Schulman Theater, 106 Calyer Street, Brooklyn, NY 11222. Tickets are $18 in advance ($22 at the door) and are available at https://www.eventbrite.com/e/yumiko-yoshioka-guest-curated-event-by-vangeline-theaterny-butoh-institute-tickets-39531069493 or by phone at (718) 389-3473.

Butoh Master Yumiko Yoshioka performs 100 Light Years of Solitude, the second part of her trilogy 100 Flowers. The work is inspired by Garcia Marquez’s One Hundred Years of Solitude and explores a state of solitude through Butoh. Yumiko Yoshioka is a Japanese Butoh dancer and choreographer from Japan/ Germany. She is a former member of Ariadone, the first female Butoh company, which was founded by Ko Murobushi and Carlotta Ikeda in 1974.

In 100 Light Years of Solitude, Yumiko dances the life of a unique creature, born on a planet 100 light years away from ours. Imagining that this creature is the only one of its species on that planet, it enjoys unfolding its life until it realizes its destiny: to exist in solitude.

Yumiko says, “In my childhood, I was always fascinated by the imaginary creatures and monsters of fairy tales. Butoh, a dance of metamorphosis, helps me to explore this imaginary world, and make something invisible visible.”

VANGELINE THEATER/ NEW YORK BUTOH INSTITUTE aims to preserve the legacy and integrity of Japanese Butoh, while carrying the art form well into the future. The unique art of Butoh originated in post-World War II Japan as a reaction to the loss of identity caused by the westernization of Japanese culture, as well as a realization that ancient Japanese performing traditions no longer spoke to a contemporary audience. One of the major developments in contemporary dance in the latter half of the 20th century, Butoh combines dance, theater, improvisation and influences of Japanese traditional performing arts to create a unique performing art form that is both controversial and universal in its expression. The Vangeline Theater is home to the New York Butoh Institute, dedicated to the advancement of Butoh in the 21st century.