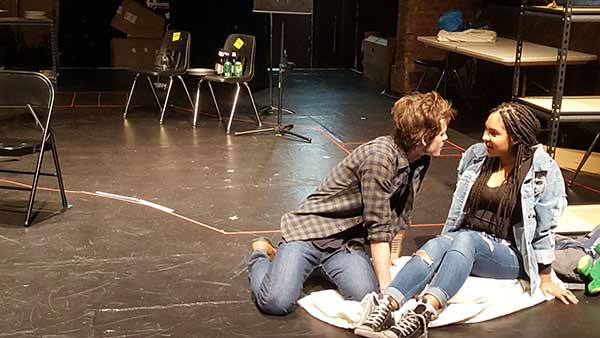 at The Theatre at St. Clement’s

The world premiere of the new off-Broadway play Eco Village has found its cast and design team. Loosely based on the experiences of playwright Phoebe Nir at the Bread and Puppet Theater, Eco Village explores the complexities of community and the boundaries of human behavior. The show will play at The Theatre at St. Clement’s, 423 W. 46th Street, New York, NY 10036 from January 15-February 16 2019. Eco Village will preview from January 15-21, with opening night on January 24. Performances: Monday and Wednesday at 7pm; Thursday, Friday and Saturday at 8pm; and Saturday and Sunday at 3pm. Tickets are $35-69 and can be purchased at ecovillagetheplay.com.

When temporarily homeless Robin hitchhikes her way to an eco-village seen online, all she wants is a warm meal, a place to sleep, and some new friends. Instead, she finds a parallel universe, where survival skills and New Age optimism are blended together. When Robin falls for Jake, a brilliant but tormented handyman, their connection sets off a series of events that reveal the limits of human connection and the costs of utopia.

Please note that the Theatre at St. Clement’s is not wheelchair accessible. The theater is located up a flight of stairs.

PHOEBE NIR (Playwright/Producer) was received by President Obama at the White House as a Presidential Scholar of the Arts in Writing. She is currently developing a graphic novel, “Diana & Navy & The Golden Tooth”, with illustrator Steve Buccelatto, as well as a musical by the same name, which has been seen at LaMaMa, Feinstein’s/54 Below, Blackbox Theater, and John Jay University. Her short film, “Marcus’s Sweater”, directed by Chidi Ozieh, was an official selection of the Philadelphia International Film Festival. As a singer/songwriter, she was selected as an official showcase artist at SXSW 2017, where she opened for James Chance & The Contortions and The Modern English. She graduated from Brown University in 2014 with a degree in Writing for Performance, and is currently enrolled at NYU, where she is earning a Master’s degree in Drama Therapy. Phoebe is honored to hold space as a yoga teacher and doula, and gratefully thanks her family for their support.

CHLOE TREAT (Director) is a New York based director and choreographer. Born and raised in the great, if not occasionally problematic state of Texas; she directs and choreographs musicals, plays, operas, outdoor dance rituals and feminist westerns. Chloe recently directed productions of Cabaret, James Joyce’s The Dead, a new musical The Wave and Spring Awakening. Next she will be directing and choreographing Street Scene at Mannes School of Music

BLAIR BAUERSCHMIDT (Costume Design) is an artist whose creative designs adorn and enhance performers across all platforms. After graduating from FIT with a degree in accessory design she started her graffiti line of clothing which was sold at Barney’s, NY. She has a reputation for being the go-to girl for customization, and Janet Jackson, Weezer, Alicia Keys, and Demi lovato have all sported her gear. She recently designed a custom installation for Beck to promote his new album Colors at Rough Trade in Brooklyn, and she is currently designing theater sets for the Harlem School of the Arts. In February 2019 she is relaunching her new website, stay tuned!

JOSH SAMUELS (Sound Design) is an NYC based sound designer. Recent theatre credits include: As a Designer: The Glow Overhead, Tiny Houses(Chautauqua Theatre Company); I and You (Kitchen Theatre Company); Peter and the Starcatcher, When in Carthage, Red (Cider Mill Playhouse). As an Associate: Network (Broadway), Torch Song (Broadway), The Age of Innocence (McCarter Theatre Center), Three Tall Women (Broadway), The Stone Witch (WestSide Theatre Upstairs), Dirty Dancing (National Tour). He is a member of the Theatrical Sound Designers and Composers Association and has a degree in theatrical design from Ithaca College. http://jsamuelsdesign.com/

MEGAN GARNER (Properties Design) holds a BFA from Purchase College in NY. Over the past ten years she has worked all over the country from Utah Shakespeare Festival to Connecticut Repertory Theatre. Megan’s most recent design credits include Spring Awakening, Thoroughly Modern Millie, and Suor Angelica. Megan would like to thank her partner James for supporting and encouraging her, as well as her family and friends. She is currently the resident Properties Designer at Manhattan School of Music.

MATT FRANTA (Violence Design). Off-Broadway: We Are The Tigers, The Video Games. Other credits include work with the Guthrie Theater, Children’s Theatre Company, Marin Shakespeare Company, Long Beach Playhouse, Four Clowns, and the National Theatre for Children. Matt holds a BA in Drama/Speech from Clarke University in Dubuque, IA, and is a graduate of the International Stunt School in Seattle. He currently teaches stage combat at the American Musical and Dramatics Academy in Los Angeles.www.MattFranta.com

LILY DAVIS (Sammi) hails from Mercer Island, WA by way of LA, and Pittsburgh, PA. She was last seen down the street at St. Luke’s Theatre in Wicked Frozen as Glindanna (yes, Glinda and Anna COMBINED) in NYC. You may also catch her on an episode of Happy! on the SYFY network with Chris Meloni, or on an episode of Bull on CBS. Other credits include: Estella-Great Expectations, Witch 2-Macbeth, Ariel- Footloose, Polly-Crazy For You, Cassie- A Chorus Line, Lady Teazle-The School For Scandal, among others. Lily holds her BFA from Point Park, is an avid yogi, a dedicated Freeman Studio member, and the youngest of four goofy Davis sisters.

GREGORY ISAAC STONE (Jake) is a graduate of The Boston Conservatory. Regional credits include: “Lord of the Flies” (Jack) at The Denver Center and “Vanya and Sonya and Masha and Spike” (Spike) at The Cleveland Playhouse, Geva Theatre, and Cape Cod Playhouse. Film: “Write When You Get Work” (Wegs).

ARIANA WILLIAMS (Robin) is a Junior at NYU Tisch. She studied at the Strasberg Institute and the Stonestreet Film Studio. She is thrilled to be making her Off-Broadway debut in Eco Village. Favorite credits: Juror #8 in 12 Angry Men, Lady Macbeth in Macbeth, Susan Hendrix in Wait Until Dark, and Grace Fryer in Radium Girls. Her recent film Cookie Heart won Best Cinematography at the International Filmmaker Festival of New York.

ZOE WILSON (Casey) (16) is an actress/singer/songwriter & winner of 2017 NYMF Outstanding Individual Performance Award. Select Professional Credits: White Effie in Orange is the New Black, Play Like A Winner @ Playwrights Horizons, Transport Group’s Three Days to See @ NYTW, Peter Pan @ The Signature, The Pill @ LaMaMa, and The Opera is Always on the Table @The New Ohio Theatre. NEXT UP 2019 FILM DEBUT:My Dinner With Schwartzeyand The Shallow End. Zoe is represented by Lauren Singer Talent and Innovative Artists. Follow @ instagram.com/zoeferdie