presents the U.S. Premiere of

An experiential entertainment about pornography . . . 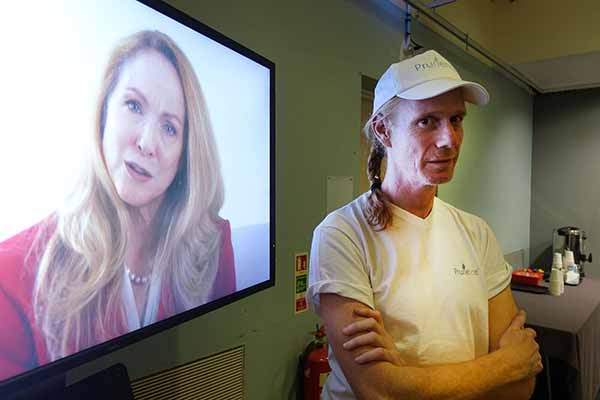 Following a sold-out run at the Southbank Centre in London, Works & Process, the performing arts series at the Guggenheim, presents the U.S. Premiere of Prurience, an experiential entertainment about pornography, written and directed by Christopher Green and co-directed by Holly Race Roughan (People, Places & Things), from March 20-31, 2018.

“Theatrically the piece is audacious, springing a series of head-spinning surprises.  This is the kind of art that leaves its mark on you.  Unnerving, and uncomfortably compelling.” – The Times (UK)

“Green and company confound us, drawing profound attention to the warped notions of pleasure, pain and privacy that are peddled by contemporary pornography.” – The Stage (UK)

“Prurience will leave you guessing and thinking long after you’ve left the theatre.”
– Spy In The Stalls (UK)

Prurience has been created with support from the Wellcome Trust.

Christopher Green is a writer, performer and theatre maker.  His experiential theatre credits as creator, writer, and director include: Prurience: an experiential entertainment about porn.  VIP; The Frozen Scream (co-written with best selling British novelist Sarah Waters); and Office Party (co-created with Ursula Martinez, directed by Cal McCrystal (Paddington, One Man, Two Guvnors). Christopher has recently published his book Overpowered: The Science & Showbiz of Hypnosis.  He is a trained hypnotherapist and has reinvented the stage hypnotism routine in his theatre show The Singing Hypnotist. This was developed when he was the first Artist in Residence at The British Library in 2012. Christopher is the curator of Victorian Popular Entertainments: There Will Be Fun! at the British Library which ran from 2016-2017, and has scripted the material for his own repertory company of performers to support the exhibition. Christopher regularly writes for BBC Radio 4, including 9 series of Tina C and many radio plays.  His most recent is How Success Ruined Me (TX Jan 18), a two hander with entertainment legend Roy Hudd about music hall singer, Fred Barnes.  Christopher’s radio drama series The Experience of Love in May, a five part series exploring queer history in the late 20th Century is now being developed for television.  He is developing two major entertainment historical costume drama series for an international broadcaster. He performs as characters such as country music singer, Tina C. who has recently published her autobiography, Complete & Utter Country, rapping pensioner Ida Barr and cultural critic Jedd O’Sullivan.  Christopher has won multiple awards including the Olivier award for Best Entertainment in 2004 and most recently, best Cabaret Show at Brighton Festival 2017. Christopher’s works in development include Music Hall Monster: The Insatiable Mr Fred Barnes for production at Wilton’s Music Hall in 2018, a commission from the Gate Theatre, London and the large-scale immersive show, The Home, in association with Entelechy Arts and The Albany for production in 2019. Christopher is an Artistic Associate of Alexandra Palace, Wilton’s Music Hall, Duckie, Entelechy Theatre Company, and Creative Cowboy Films (Australia).

Holly Race Roughan is a young director who has worked in theatres throughout the UK. Her particular focus is on directing new work. Holly is currently directing the UK tour of People, Place and Things, a National Theatre and Headlong co-production with Jeremy Herrin. She directed Prurience at Southbank Centre. Other credits include Start (Lyric Theatre); Blood & Water, devised with and performed by the inmates of HMP Springhill (Royal Court); Bunch (Hampstead Theatre); Best Served Cold (Old Vic Tunnels – Vault Festival); and Clickbait (Theatre 503); among others.

Liz Ortiz-Mackes is a casting director and indie film producer credited on projects which have screened at hundreds of film festivals including: Sundance, BAM Cinemafest, Toronto, Palm Springs, HBO Latino, Urban World, among others, and have aired on CBS, HBO, Showtime, Lifetime and Cinemax. Casting/producing highlights include: Feature Films “Advantageous” Sundance premier and a top selection on Netflix, “Lost Revolution” HBO Latino, “Zombie Honeymoon” a cult classic/Showtime, “Barrio Boy”, in production, director/producer of “And Seen”documentary in post-production and cast numerous stage productions. Author of “Ace Your Acting Audition, 2nd ed.” Currently an instructor and private coach with Casting Solutions Coaching and conducts workshops throughout the year for the SAG/AFTRA Foundation.

Works & Process at the Guggenheim
Described byThe New York Times as “an exceptional opportunity to understand something of the creative process,” for over 33 years and in over 500 Works & Process productions, New Yorkers have been able to see, hear, and meet the most acclaimed artists, in an intimate setting unlike any other. Works & Process, the performing arts series at the Guggenheim, has championed new works and offered audiences unprecedented access to generations of leading creators and performers. Most performances take place in the Guggenheim’s intimate Frank Lloyd Wright-designed 285-seat Peter B. Lewis Theater. In 2017, Works & Process established a new residency and commissioning program, inviting artists to create new works, made in and for the iconic Guggenheim rotunda. worksandprocess.org.