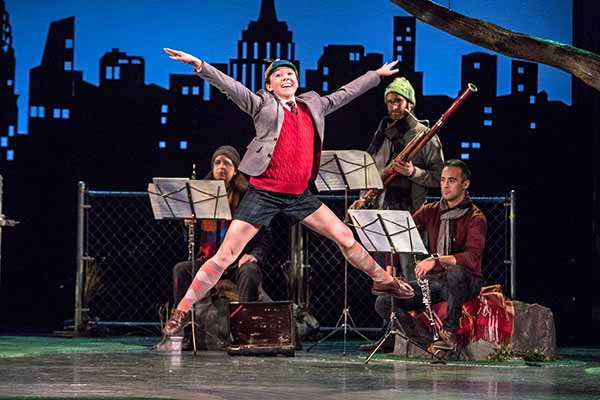 Performances:  Saturdays and Sundays at 2:30 and 4pm; and Friday, December 8 at 6:30pm. For children 5 and up. Enter via the ramp at 88th Street and Fifth Avenue.

ABOUT PETER & THE WOLF

In 1936, Sergei Prokofiev was commissioned to write a light-hearted piece for children that would introduce the instruments and sounds of the orchestra. He was given a libretto, but he didn’t like it, so he came up with a new story. The music was completed in a week. Peter & the Wolf was the result, and it is a work still loved by children and adults. The story tells how Peter, against his grandfather’s will, opens the park gate, ventures into the big green meadow, and ultimately manages to liberate the City from the scary wolf. Peter captures the wolf with the help of a bird, his friend, and hands him over to the hunter, with a specific request: to take the wolf to the zoo. Each character in the story is represented by an instrument. The narrator reads the story between the musical sections.

Isaac Mizrahi (libra) has directed numerous theatrical productions and operas including a 2014 production of The Magic Flute at Opera Theatre of Saint Louis. Mizrahi has worked extensively in the theater both as a performer and a designer of sets and costumes. He received a Drama Desk Award and four CFDA awards. He was the subject and co-creator of Unzipped, a documentary following the making of his Fall 1994 ready-to-wear collection which received an award at the Sundance Film Festival. He has been a leader in the fashion industry for nearly 30 years and currently serves as the Chief Designer for the IMNYC Isaac Mizrahi and Isaac Mizrahi Live! collections. He hosted his own television talk show for five years, has written two books and has made countless appearances in movies and television. He serves as a weekly judge on Project Runway: All-Stars. He is currently writing a memoir due out in 2019.

Originally from Anchorage, Alaska, John Heginbotham (Choreographer)graduated from The Juilliard School in 1993, and was a member of Mark Morris Dance Group from 1998 – 2012.  In 2011 he founded Dance Heginbotham (DH), which has been presented and commissioned by institutions including Bard College, Baryshnikov Arts Center, Brooklyn Academy of Music, Jacob’s Pillow Dance Festival, The Kennedy Center, The Joyce Theater, and Lincoln Center for the Performing Arts, among others.  In 2016, DH toured to Indonesia, Laos, and the Philippines with DanceMotion USASM, a cultural diplomacy initiative of the U.S. Department of State, produced by the Brooklyn Academy of Music.  John’s recent independent projects include choreographing Candide for the Orlando Philharmonic (2016);  Daniel Fish’s Oklahoma! at Bard Summerscape (2015); Angels’ Share for Atlanta Ballet (2014); and Isaac Mizrahi’s The Magic Flute at Opera Theatre of Saint Louis (2014).  In the fall of 2017, he will choreograph the San Francisco Opera production of John Adams’ and Peter Sellars’ new opera Girls of the Golden West. Select honors include the 2014 Jacob’s Pillow Dance Award, a 2016 Fellowship at NYU’s Center for Ballet and the Arts, and a 2017-18 New York City Center Choreography Fellowship. www.danceheginbotham.org

Brad Lubman, conductor/composer is founding Co-Artistic and Music Director of Ensemble Signal. Lubman is one of the foremost conductors of modern music and a leading figure in the field for over two decades. A frequent guest conductor of the world’s most distinguished orchestras and new music ensembles, he has gained widespread recognition for his versatility, commanding technique, and insightful interpretations. His flexibility in a variety of settings has led him to conduct a broad range of repertoire from classical to contemporary works, and to direct projects including orchestra, opera, multimedia, and mixed ensemble. Lubman has led major orchestras including the Royal Concertgebouw Orchestra, The Bavarian Radio Symphony Orchestra, Los Angeles Philharmonic, San Francisco Symphony, NDR Sinfonieorchester Hamburg, Dresden Philharmonic, DSO Berlin, RSO Stuttgart, WDR Symphony Cologne, Orchestre Philharmonique de Radio France, Finnish Radio Symphony, the Netherlands Radio Chamber Philharmonic, and the National Symphony. In addition, he has worked with some of the most important ensembles for contemporary music, including London Sinfonietta, Ensemble Modern, Klangforum Wien, musikFabrik and Steve Reich and Musicians. His own music has been performed in the USA and Europe, and can be heard on his CD, Insomniac, on Tzadik. Brad Lubman is on faculty at the Eastman School of Music and the Bang on a Can Summer Institute.