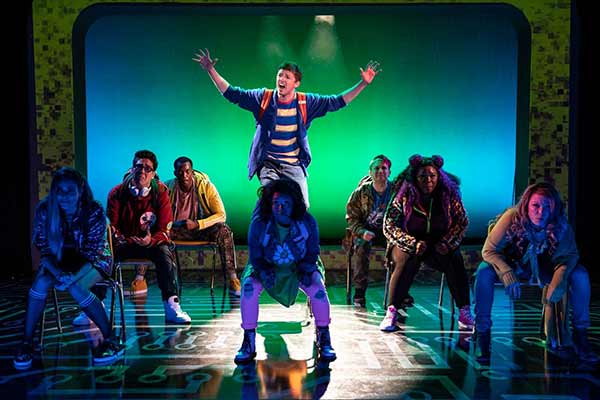 presents a behind the scenes look at the new musical

Works & Process, the performing arts series at the Guggenheim, presents a behind the scenes look at Be More Chill by Joe Iconis and Joe Tracz on Monday, January 21 at 7:30pm.

Writers Iconis and Tracz, director Stephen Brackett and choreographer Chase Brock will discuss their creative process with moderator Laura Heywood and, in a twist, Dr. Robert Klitzman, Director of the Masters of Bioethics Program at Columbia University, who explores the bioethical implications of the musical.Cast members Will Roland, George Salazar and Stephanie Hsu will perform excerpts from the musical: “I Love Play Rehearsal,” “Michael in the Bathroom” and “Two Player Game.”

Based on the acclaimed 2004 novel by Ned Vizzini, Be More Chill is a musical about Jeremy Heere, an average teenager. That is, until he finds out about “The Squip”-a tiny supercomputer that promises to bring him everything he desires most: a date with Christine, an invite to the raddest party of the year, and a chance to survive life in his suburban New Jersey high school. A truly hilarious, honest, and invigorating look at the lengths one will go to get the girl,Be More Chill is set to some of the most vibrant and exciting songs in musical theater today.

Following a a sold-out run off-Broadway this summer, Be More Chill will begin performances on Broadway at the Lyceum Theatre (149 West 45th Street) on Wednesday, February 13, 2019.

A hit with audiences and critics alike, this summer’s New York premiere production “one of the most popular musicals in America” by The New York Times writes. The Wall Street Journal wrote “you don’t have to be a millennial to revel in the spunky charms of Be More Chill. See it now if you can wrangle a ticket, because it’s going to hit big – deservedly so.” The New Yorker says “if you fed Dear Evan Hansen and Mean Girls to the Little Shop of Horrors plant, with a few Xbox games as a digestif, Be More Chill is probably what you would get. …Dynamic, jouncy, and as infectious as malware.”

Even before arriving in New York, Be More Chill’s inspired a dedicated community of fans around the world. Before opening, this summer’s New York premiere engagement sold out its entire limited run with tickets purchased by fans from all 50 states (plus Washington D.C.), and from 18 countries on five continents.  Be More Chill had already amassed an unprecedented following across various online platforms, with millions of fans from Brazil to Japan to New Jersey sharing fan art, streaming the album (over 200 million streams to date), and talking about the show. Tumblr ranks Be More Chill as the #2 most talked-about musical on their platform, following Hamilton.

More details are available at www.BeMoreChillMusical.com.

Casting and program subject to change.

Lead funding for Works & Process is provided by The Florence Gould Foundation, The Christian Humann Foundation, Mertz-Gilmore Foundation, Stavros Niarchos Foundation, Rockefeller Brothers Fund, and the Evelyn Sharp Foundation, with public funds from the National Endowment for the Arts and New York City Department of Cultural Affairs in partnership with the City Council.

Described by The New York Times as “an exceptional opportunity to understand something of the creative process,” for over 34 years and in over 500 productions, New Yorkers have been able to see, hear, and meet the most acclaimed artists in the world, in an intimate setting unlike any other. Works & Process, the performing arts series at the Guggenheim, has championed new works and offered audiences unprecedented access to generations of leading creators and performers. Most performances take place in the Guggenheim’s intimate Frank Lloyd Wright-designed 285-seat Peter B. Lewis Theater. In 2017, Works & Process established a new residency and commissioning program, inviting artists to create new works, made in and for the iconic Guggenheim rotunda. worksandprocess.org.