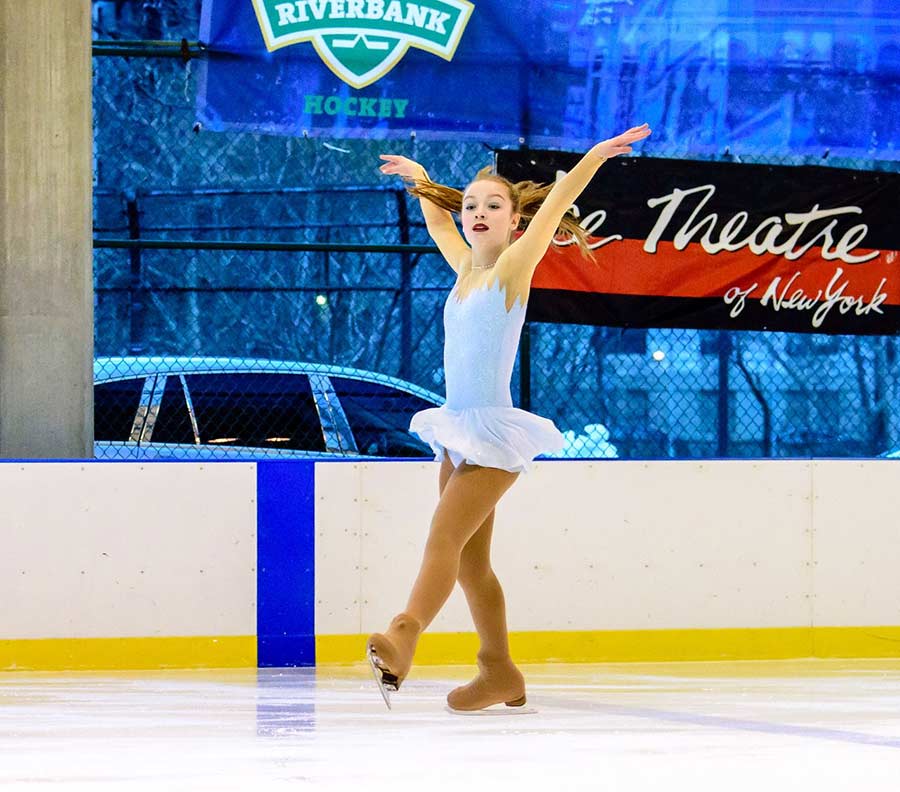 Ice Theatre of New York (ITNY) will perform at the Winter Holiday Skating Celebration and Tree Lighting at the Ice Rink at Denny Farrell Riverbank State Park on Saturday, December 11, 2021 at 4pm. The ITNY ensemble and apprentice performers will be joined by synchronized skaters from The Skyliners, members of the young women’s empowerment group Figure Skating in Harlem, performers from the Riverbank Figure Skating Club, and the Sky Rink All Stars. Following ITNY’s performance there will be a rink-side countdown to the lighting of a Christmas tree featuring local dignitaries, NYC Council Member Elect Shaun Abreu, United States Representative Adriano Espaillat, and New York State Assemblymembers Inez Dickens and Al Taylor. For more information, call Riverbank at (212) 694-3642 or ITNY at (212) 929-5811.

Journey Into the Snow, performed by Jessica Huot and Conor Wagar

The venue will follow all COVID rules. The rink is open on all sides and has a roof.

About Ice Theatre of New York

Founded by Moira North, ITNY’s mission is to celebrate and advance dance on ice as a performance art. Through its performances in both traditional and site-specific venues, ITNY presents ice dance that helps to open one’s eyes to seeing skating in new and unexpected ways. ITNY was the very first ice dance company to receive dance program funding from the National Endowment for the Arts, the New York State Council on the Arts and the New York City Department of Cultural Affairs. www.icetheatre.org. For biographies on the ITNY Ensemble members, visit https://icetheatre.org/performers.html.

Danil Berdnikov is from the city of Samara in Russia. Danil was a part of junior national team and competed within Russia until he completed high school. Danil then decided to move to Moscow to continue his education and to join Stage Entertainment Russia for an opportunity to begin performing as an ice skater. Performing for an audience, Danil fell in love with skating in a new way, so he has continued to skate professionally for the past eight years. Over the course of his professional skating career Danil had a privilege of working for Willy Bietak Productions and Wheeler Productions in the US, Stageworks Worldwide Production in the UK, Holiday on Ice Productions and Dynamic Shows Entertainment in the EU, Stage Entertainment Russia. Ice skating has brought Danil many different opportunities, including the chance to travel the world and do what he truly loves. He is very grateful to his parents, coaches, choreographers, and fellow skaters who have supported him along the way, and he is very excited to fulfill another incredible dream of performing for Ice Theatre of New York, Inc.®

Jessica Huot is a six-time Finnish National Ice Dance Champion and USFS quadruple gold medalist. She and her ice dance partner competed in the World and European Figure Skating Championships in 2002-2004 as well as the Junior and Senior Grand Prix competition circuits from 1999-2003. Jessica received her Bachelor of Science in 2006 from the Massachusetts Institute of Technology, majoring in Brain and Cognitive Sciences. She went on to earn her Master of Music degree in Piano Performance from New York University in 2012. In addition to teaching skating, she gives private piano lessons in the NYC area. She has performed as a principal dancer for ITNY since 2010.

Conor Wagar first became interested in skating at the age of 10, when he was taken to a Disney on Ice show. Amazed by the performers, he begged his parents to sign him up for lessons. Under the guidance of coach Doris Papenfuss, Conor competed at Junior Nationals with only two years of skating under his belt, went on to compete at Eastern Sectionals and was an alternate for US Nationals. As well as skating for ITNY, Conor is a certified personal trainer and nutrition coach.

Kate Mangiardi is a USFSA gold medalist in Moves in the Field. She has been coaching throughout the tristate area for over 15 years and enjoys working with all levels. After receiving her Bachelor of Arts from Vassar and MFA in painting from RISD, she has been exhibiting her work in various museums and galleries. In 2009, Mangiardi was awarded the W.K. Rose Fellowship in the Creative Arts. Kate merges her experience as a skater into her art through exploring the connection between the etching a skater leaves behind on the ice and creation of a drawing. Kate is excited and grateful for the opportunity to explore this direction in her work with ITNY.

Sarah France originally comes from Pittsburgh, PA, but now resides in New York City. Since 1998 Sarah has been an ice dance coach and choreographer working with Regional, Sectional, National and International competitors across all skating disciplines at Shattuck St. Mary’s in Minnesota and she currently is a faculty-member-at-large. Before taking the ice, Sarah started her love of movement studying ballet and eventually transitioned to performing professionally in modern dance and several other disciplines as well as skating and teaching. Sarah is a five-time US Open Professional Figure Skating Championships competitor, US Figure Skating triple gold medalist, and national ice dance competitor. She is honored and excited to be performing with ITNY, having followed Ice Theatre of New York® since she was inspired by it as a young skater herself. Sarah debuted with ITNY in the spring of 2019. Sarah is currently the Director of Skating at City Ice Pavilion in Long Island City.

Skyliners Synchronized Skating Team was established in 2001 by a group of parents who wanted to create a new competitive synchronized skating club in the tri-state area. Over the last nineteen seasons, Skyliners has grown to be one of the top synchronized skating clubs in the country, winning 16 National Championships, 33 Eastern Championships, and back-to-back Silver and Bronze medals at Junior Worlds in 2018 and 2019, the first worlds medals ever for Team USA Junior. 2020 also marks the third year that our Senior line has been chosen to represent Team USA at Senior Worlds. The tremendous growth and success of the team are attributed to the dedicated athletes, the talented coaches and the devoted Board members and parent volunteers who make Skyliners possible season after season.

Founded in 1997 as a response to a direct need in the Harlem community, FSH established itself as a safe space for young girls to achieve academic excellence and physical well-being through the lens of figure skating.

The Sky Rink All Stars are multiple Showcase National medalists. They perform in various venues in the tri-state area under the tutelage of their coach, Marni Halasa.