You can also Purchase Tickets Here… 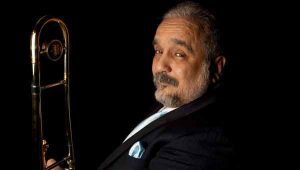 Lehman Center for the Performing Arts presents the return to “LA Casa De La Salsa” the Legendary Son of the Bronx, WILLIE COLÓNand his orchestra to perform ASALTO NAVIDEÑO, a special exclusive Christmas concert celebration on Saturday, December 9th, 2017 at 8pm. With over 50 years of experience, renowned singer, trombonist, composer, producer, actor, director, and internationally respected community leader, Willie Colón has recorded 40 albums and sold more than 30 million records worldwide, including fifteen gold and five platinum records and eleven GRAMMY nominations. Asalto Navideño, will be a Christmas celebration filled with songs that adorn every moment of the holidays including “Canto a Borinquen” “La Murga Panameña”, “Traigo La Salsa”, “Arbolito” and “Asalto Navideño” as well as the acclaimed hits that salsa fanatics cannot do without like “Idilio”, “Gitana”, “ Oh Que Sera”, “El Gran Varon”, and “Sin Poderte Hablar”. This concert is produced by Lehman Center and José Raposo.

Lehman Center for the Performing Arts is on the campus of Lehman College/CUNY at 250 Bedford Park Boulevard West, Bronx, NY 10468. Tickets for WILLIE COLÓN ASALTO NAVIDEÑO on Saturday, December 9th, 2017 at 8pm are $100*VIP, $65, $55, and $50 and can be purchased by calling the Lehman Center box office at 718-960-8833 (Monday through Friday, 10am–5pm, and beginning at 12 noonon the day of the concert), or through online access at www.LehmanCenter.org. *VIP Reception: The HAVANA CAFÉ, Havana Club Rum and Lehman Center special VIP pre-concert wine, beer, Havana Club Rum & hors d’oeuvres reception will start at 6:30pm. VIP ticketsinclude the reception and the best seats in the house. At the reception meet other patrons and the staff of Lehman Center. Sponsored by Havana Café Restaurant and Havana Club Puerto Rican Rum. Lehman Center is accessible by #4 or D train to Bedford Park Blvd. and is off the Saw Mill River Parkway and the Major Deegan Expressway. Low-cost on-site parking available for $5.

WILLIE COLÓN, Bronx-born of Puerto Rican grandparents, has fused his musical talent, his passion for humanity, and his community and political activism into an extraordinary career. He formed his first band in 1964 at age 14 and made his recording debut as a bandleader on the self-produced single “Fuego en el barrio.”  One of the first signings to the Fania Records label, his 1967 Fania debut, El Malo, included his first hit, the instrumental “Jazzy.” Ten albums between 1967 and 1975 were made in partnership with Puerto Rican-born Héctor Lavoe. Asalto Navideño Vol. 1 (1971) was created as a tribute to the old Jibaro Christmas music of Colón’s grandmother Antonia Pintor and featured cuatro player Yomo Toro and Lavoe on vocals. Two years later, Colón, Lavoe and Toro released a second album of Jibaro Christmas selections, Asalto Navideño Vol. 2, that also emphasized Jibaro country music with the addition of the other Latin rhythms of salsa, Guaguancó, merengue, bomba, samba and Panamanian murga. In 1974 Colón turned leadership of his band over to Lavoe to concentrate on producing and arranging. His albums over the next four years continued to be in association with other lead singers, including Rubén Blades, Mon Rivera and Celia Cruz, and his 1978 collaboration with Blades, Siembra, is the biggest-selling Salsa/Tropical album of all-time. Though he had emerged from the coro to sing lead vocals on three tracks of his GRAMMY-nominated 1975 album The Good, The Bad, The Ugly, 1979’s Solo was the first time he carried an entire album as lead singer, and this album went gold within three weeks of its release. Colón made three more solo albums before leaving Fania in the mid-’80s, including 1981’s platinum-winning Fantasmas. He has performed internationally for decades, including a 1998 reunion with Blades for Amnesty International in Caracas, Venezuela for over 140,000 people. In 2004 Colón received a Lifetime Achievement Latin GRAMMY Award, followed up by a 2005 sold-out tour of Latin America with Marc Anthony. In 2008 he released El Malo II: Prisioneros del Mambo, a mixture of contemporary sounds and Salsa dura, and in 2010 scored a hit with “Estar lejos,” a duet with Colombian music star Fonseca.

Willie Colón has been a civil rights, community, political and health activist as well as Chair of the Association of Hispanic Arts, a member of the Latino Commission on AIDS, and a member of several boards of directors, including the United Nations Immigrant Foundation. In 1991 he was awarded Yale University’s CHUBB Fellowship, a political recognition he shares with such luminaries as John F. Kennedy, Moshe Dyane and Ronald Reagan. In 1995 Colón became the first minority to serve on the ASCAP National Board of Trustees and is now a member of the ASCAP Foundation.  In 1997 he became a spokesperson for CARE, visiting sites in Bolivia. His involvement in the campaign to end U.S. military occupation and practice bombing at the Puerto Rican island of Vieques earned him the EPA’s Environmental Quality Award. A visiting professor and lecturer at many prestigious colleges and universities, Colón has honorary doctorates from both Trinity and Lehman Colleges. In 2008 he was named one of the 100 most influential Latinos by People en Espanol, and in 2009 he received the Latino Trendsetter Award, presented at the United Nations. In 2015 Billboard Magazine named Colón as one of the 30 most influential Latin Artists of All time. He is currently working on a large project an autobiographical book and a DVD to celebrate his half-century long musical career. Tentatively titled Barrio de Guapos (The Secret Life of Willie Colón), he has released the first single from the album, “Vida Mas Simple”, a guitar-led ballad.