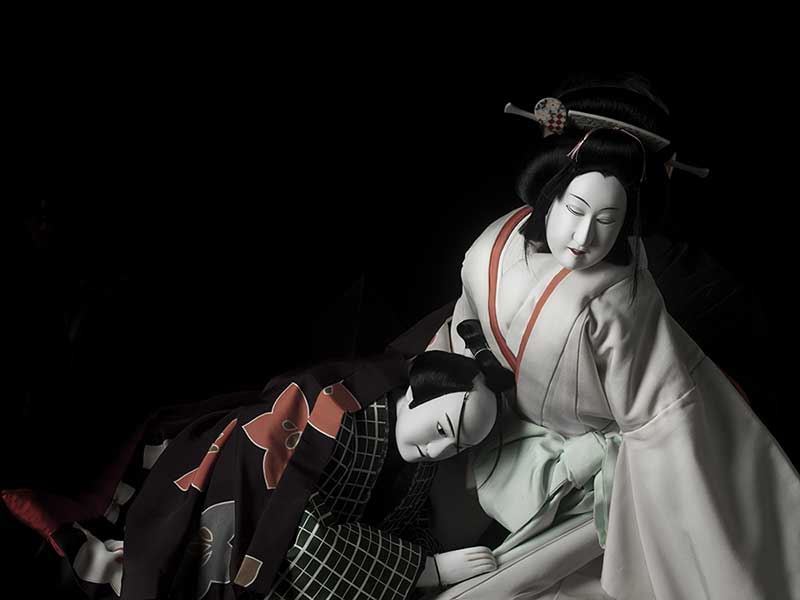 The 2019 White Light Festival opens on Saturday, October 19 with Sugimoto Bunraku Sonezaki Shinju: The Love Suicides at Sonezaki told through Japanese bunraku puppet theater in a contemporary interpretation directed by renowned artist Hiroshi Sugimoto. Incorporating music by Seiji Tsurusawa, designated by Japan as a Living National Treasure, and video by Tabaimo and Sugimoto, this U.S. production premiere is a bold staging of Chikamatsu Monzaemon’s classic 18th-century drama based upon actual events, and a rare opportunity to experience bunraku in New York City.

At the turn of 18th-century Japan, a clerk and a courtesan committed suicide in the forest of Tenjin. The Love Suicides at Sonezaki, a tragic play based upon these actual events, was banned after its 1703 premiere for more than two centuries. For this U.S. production premiere, renowned artist Hiroshi Sugimoto presents a bold, contemporary interpretation of the classic drama using bunraku puppet theater with music by Seiji Tsurusawa, who has been designated by Japan as a Living National Treasure, and video by Tabaimo and Sugimoto. The puppets, imbued with life, captivate audiences with their lively movements rivaling the eloquence of actual human beings.

Presented in association with The Japan Foundation and Odawara Art Foundation. Sugimoto Bunraku Sonezaki Shinju: The Love Suicides at Sonezaki is part of Japan 2019, a series of events highlighting Japanese arts and culture in the United States throughout 2019.