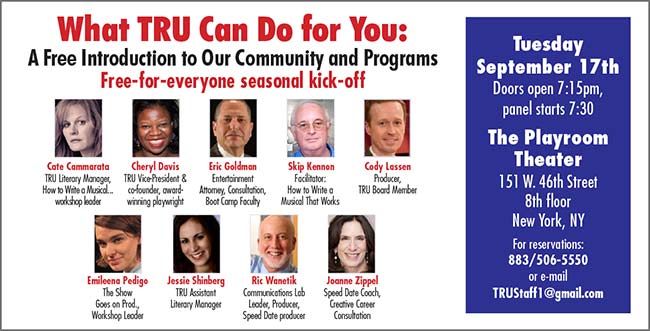 Theater Resources Unlimited
invites you to their September discussion

What TRU Can Do for You:
A Free Introduction to Our Community

Theater Resources Unlimited (TRU) presents the SeptemberPanel, What TRU Can Do for You: A Free Introduction to Our Community, on Tuesday, September 17, 2019 at 7:30pm at The Playroom Theater 151 W. 46th Street, 8th floor. This introduction to TRU is free for everyone. E-mail [email protected] or register online at https://truonline.org/events/what-tru-can-do/ using the bright red ticketing box.

Come to this free-for-everyone seasonal kickoff and networking meet-and-greet. And meet the program directors and illustrious board members of Theater Resources Unlimited that make it possible to bring you the range of programming TRU offers for producers and artists. The confirmed lineup includes TRU Vice-President and co-founder Cheryl Davis, award-winning playwright, attorney, General Counsel for The Authors Guild, and feedback panelist for How to Write a Musical That Works; TRU board member Cody Lassen, producer (upcoming How I Learned To Drive, Indecent, Spring Awakening revival; producing team of Tootsie, What the Constitution Means to Me, The Band’s Visit, Significant Other); TRU literary manager Cate Cammarata (How to Write a Musical That Works) and assistant Literary Manager Jessie Shinberg; Emileena Pedigo of The Show Goes on Productions, who will be leading upcoming workshops; Skip Kennon, former Artistic Coordinator of the BMI Lehman Engel Musical Theatre Workshop, who now helps facilitate TRU’s How to Write a Musical That Works workshop; and Ric Wanetik, producer (Tony nominated Twilight Los Angeles: 1992, Broadway’s Marlene, Off-Broadway’s Jolson and Company), who helps run TRU’s Director-Writer Communications Lab and is often a Speed Date producer. Plus two of the professionals who offer free consultations to new members: entertainment attorney Eric Goldman, and career consultant Joanne Zippel of Zip Creative.

Learn about TRU programs, including the Producer Development & Mentorship Program; Raising Money for Theater, Essentials of Successful Self-Producing and other Producer Boot Camps; the Writer-Producer Speed Date, Director-Writer Communications Lab, How to Write a Musical That Works workshop and more. And let us know what we don’t offer that you wish we did.

Doors open at 7:15pm for networking and refreshments, roundtable introductions of everyone in the room will start at 7:30pm – come prepared with your best half-minute summary of who you are, and what you need. Free for TRU members; usually $12.50 for non-members, but free for everyone for this season opener. Please use the bright red reservation box at https://truonline.org/events/what-tru-can-do/, call at least a day in advance (or much sooner) for reservations at 833-506-5550, or e-mail [email protected]

Cate Cammarata is a producer, director, dramaturg and writer in NYC and is the Associate Artistic Director for Rhymes Over Beats Hip Hop Theater Collective. Cate has produced The Assignment off-Broadway and My Father’s Daughter with Ursula Rucker at La Mama for Rhymes Over Beats. Regionally she produced My Life Is a Musical at Bay Street Theater and has directed many readings of new work in NYC. She is the Literary Manager for Theater Resources Unlimited (TRU) and is the Director of Creative Development for MusicalWriters.com. Cate holds a BFA in Acting/Directing from Syracuse University and an MFA in Dramaturgy at SUNY Stony Brook, and teaches Theatre Arts at Baruch College. Her latest book, “Contemporary Monologues for a New Theater,” was listed as one of the Top Ten Books for theatre lovers by BroadwayDirect in 2018. catecammarata.com, createtheater.com

Cheryl Davis received the Kleban Award as a librettist for her musical Barnstormer, (written with Douglas J. Cohen) about Bessie Coleman, the first Black woman flyer. The show received a Jonathan Larson Award through the Lark Play Development Center. Her play Maid’s Door received great reviews, won seven Audelco Awards, and was a finalist for the Francesca Primus Prize. Her play The Color of Justice (commissioned by Theatreworks/USA), received excellent reviews in the New York Times and Daily News, and tours regularly. Her musical Bridges, which was commissioned by the Berkeley Playhouse, received its world premiere in February 2016 to great reviews and three award nominations from the San Francisco Bay Area Theatre Critics Circle. She received a Writers’ Guild Award for her work on “As the World Turns”, and was also nominated for a Daytime Emmy Award. Her work has been read and performed internationally, including at the Cleveland Play House, the Actors Theatre of Louisville, and the Kennedy Center. She is the General Counsel of the Authors Guild.

For over 25 years, Eric Goldman has provided legal services to Emmy, Grammy, Oscar and Tony award winning talent, and to technology and internet entrepreneurs. Recent projects include representing the writers of the Broadway smash hit COME FROM AWAY and the producers of the highly successful Off-Broadway musical parody of the television show FRIENDS.  Before launching his own firm in 2011, Eric worked for 15 years as a Senior Associate for entertainment attorney Mark Sendroff of Sendroff & Baruch LLP. Eric also served as in-house counsel for St. Martin’s Press and Hertz Computer. His first job out of law school was working as an associate for copyright guru Stanley Rothenberg.  Eric is a graduate of the University of Pennsylvania and New York University School of Law.

Cody Lassen is a Tony-nominated theatre producer and live entertainment consultant. Broadway productions include Indecent, the Deaf West Theatre revival of Spring Awakening, and the upcoming revival of Paula Vogel’s How I Learned to Drive. He has been part of the producing team for other Broadway productions including Tootsie, What the Constitution Means to Me, Torch Song, The Band’s Visit, Macbeth and Significant Other. Upcoming: The first revival of Titanic, The Flamingo Kid, Steven Sater & Duncan’ Sheik’s Alice By Heart and Burt Bacharach’s Some Lovers. In addition to producing his own projects, Cody consults for producers, theaters and agencies to help them discover how they should market their shows for the best chance of financial and critical success. Previously, he was the director of marketing for Los Angeles’ Center Theatre Group and its three theaters: the Ahmanson Theatre, Mark Taper Forum and Kirk Douglas Theatre. He is an active member of the Broadway League, the National Association of Musical Theatre, and serves on the Board of NY’s Vineyard Theatre. More info at codylassen.com

Jessie Shinberg is a recent graduate of Brandeis University. She earned her degree in American Studies and Theater Arts and is a member of Phi Beta Kappa. She has served as a dramaturg on a number of Brandeis Theater Company productions and a member of the new play submissions reading committee at Company One Theatre in Boston. Currently, Jessie works for TADA! Youth Theater in both administrative and teaching positions. Her passions include new play development, theater activism, and improv comedy.

Ric Wanitek isPresident of Ricochet Group LLC, a strategic planning and communications advisory. Known for his onboarding of leadership at major theaters here and in England, Ric is a frequent advisor to several regional theaters and is an active producer, investor and production supervisor.   He is the Senior Advisor for America to the Royal Shakespeare Company (RSC), currently represented on Broadway with Matilda the Musical. He is also the President of RSC America, a US entity supporting the work of the Royal Shakespeare Company here and around the world. An investor in over 35 Broadway and Off- Broadway productions, Ric was the lead producer and Tony nominated for Anna Deveare Smith’s Twilight Los Angeles: 1992. In 1999, he was the lead producer for Broadway’s Marlene, and was the sole producer of Off-Broadway’s Jolson and Company. For eight years Ric was the supervising producer for the Victoria Secret’s Fashion Show on CBS-TV and has produced several TV Specials for cable, PBS and universities. He is a frequent speaker and lecturer on theatre management and marketing.

Programs of Theater Resources Unlimited are supported in part by public funds awarded through the New York State Council on the Arts (NYSCA) with the support of Governor Andrew Cuomo and the New York State Legislature, as well as the Montage Foundation and the Leibowitz Greenway Foundation.

For more information about TRU membership and programs, visit www.truonline.org.