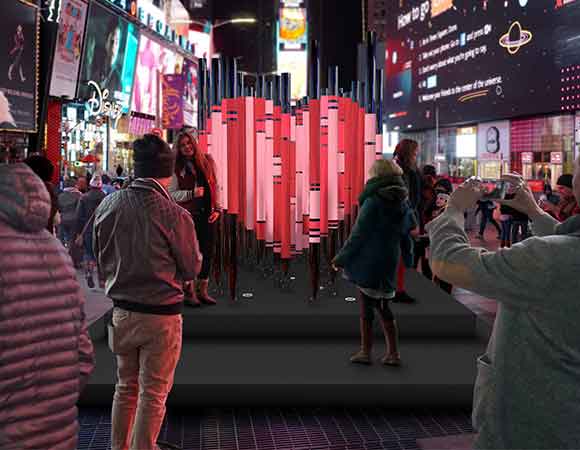 We Were Strangers Once Too

by The Office for Creative Research

Times Square Arts has announced that The Office for Creative Research is the winner of this year’s annual Times Square Valentine Heart Design Competition, curated by the Urban Design Forum. Over the last nine years, the Times Square Alliance has invited architecture and design firms to submit proposals for a romantic public art installation celebrating Valentine’s Day in Times Square.

We Were Strangers Once Too is a public data sculpture highlighting the role that immigrants have played in the founding, development, and continued vibrancy of New York City. Data from the 2015 American Census Survey takes visual, sculptural form in 33 metal poles, inscribed and hued to represent the national origins and shifting populations of foreign-born NYC residents. As visitors travel around the sculpture to a designated observation point, their perspective shifts until the individual color blocks of red and pink resolve into an iconic heart.

Conceived as both a striking visual object and as a point of dialogue and conversation, We Were Strangers Once Too champions the value of diversity in the city, and specifically the city’s immigrant populations, new and old, at a time when they are increasingly under siege.