From Chile: Teatro La De-Sentida’s The Dictatorship of Coolness 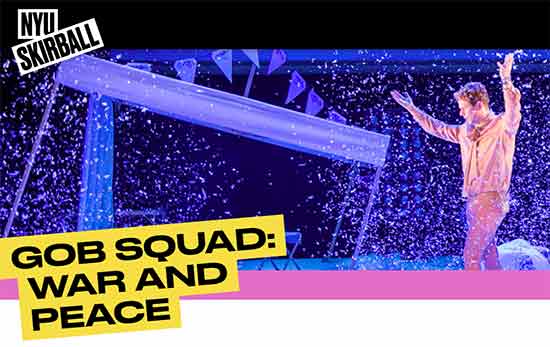 “This feels like one of the most impossible, beautiful, courageous and epic theatrical experiences you can imagine.” The Guardian (UK)

Gob Squad, Berlin’s notorious and challenging arts collective, makes live video performances that unsettle the lines between scripted and the improvised, performer and bystander, fiction and life.  Inspired by Tolstoy’s War and Peace, this bitingly funny satire views the complexity of war from the comfort of peace. “Featuring” Marilyn Monroe, Robert Oppenheimer, Walt Disney, Napoleon, Lenin, and Donald Trump, the play is set in a literary salon, where audience members join the cast in a live theater/video performance in which art and daily life, history and the present, reality and fiction, blur.

War and Peace marks Gob Squad’s third trip to New York from their home base in Berlin.  They are a collective of artists from Germany and the U.K. who have been co-conceiving, co-directing and co-performing interdisciplinary “live events” since 1994 challenges the often-hierarchical strictures of the theater. For over 20 years, Gob Squad have been searching for new ways to combine media and performance, producing stage shows, video installations, radio plays, interactive live films and urban interventions. Motivated by a desire to elevate the everyday and empower audience members to step beyond their traditional role as passive spectators, Gob Squad set up often absurdly utopian scenarios where meaningful collective experience and genuine encounters involving passers-by and audience members are suddenly possible. www.gobsquad.com 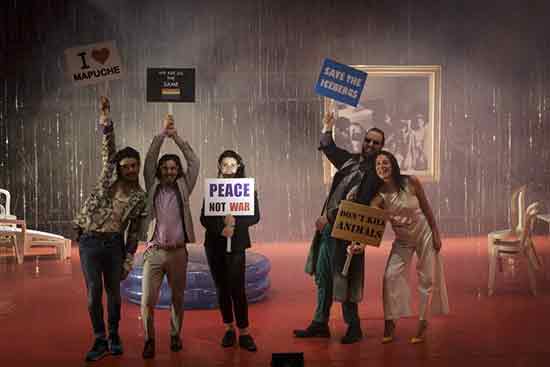 The Dictatorship of Coolness, performed in Spanish with supertitles, is a raucous social satire reflecting on art, culture and contemporary lifestyles, inspired by Moliere´s The Misanthrope. It is an amplified, monstrous photograph of ourselves and this seductive and indolent era that allows us to “resist” through consumerism and from the comfort of our own homes. The show is set on the 1st of May, as Santiago’s cultural and artistically elite gather to celebrate the new Minister of Culture. As the streets pulse with ambiance of protest, the Minister realizes the hypocrisy and inefficiency of bourgeois culture and renounces capitalism and greed, turning the celebration into a nightmare. View Trailer

La Re-sentida (The Resentful), making its U.S. debut, is a collective of young activists and artists from the Chilean national theatrical scene who regard theater as a critical instrument with major political responsibility. Their work embodies the pulses, visions and ideas of their generation and assumes as duty, audacity, the desecration of taboos and reflection generated from provocation. Their works give theatrical creation great political responsibility, understanding it as an instrument of critique, reflection and construction. Their works have been performed in more than 17 countries. teatrolaresentida.cl

NYU Skirball, located in the heart of Greenwich Village, is one of New York City’s major presenters of international work and has been the premier venue for cultural and performing arts events in lower Manhattan since 2003. The 860-seat theater, led by Director Jay Wegman, provides a home for internationally renowned artists, innovators and thinkers. NYU Skirball hosts over 300 events annually, from re-inventions of the classics to cutting-edge premieres, in genres ranging from dance, theater and performance arts to comedy, music and film.