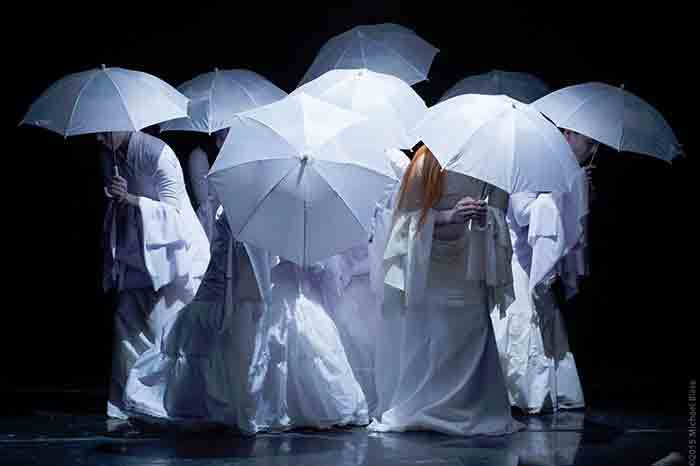 Wake Up and Smell the Coffee

Triskelion Arts, in association with Vangeline Theater, presents Wake Up and Smell the Coffee – Butoh for Waste Prevention: Reducing Coffee Trash in New York at Triskelion Arts (106 Calyer Street, Brooklyn, NY 11222) from April 20-22, 2017 at 8pm. Tickets are $16 and are available at https://www.eventbrite.com/e/triskelion-arts-presents-vangeline-theater-tickets-30044256179.

Vangeline Theater seeks to increase environmental awareness in New York and nationally, resulting in a positive impact on our ecosystem. As a key component of this initiative, Vangeline Theater will remount an evening-length Butoh performance piece, for a total of three performances, and the final show will coincide with Earth Day on April 22, 2017.

Wake Up and Smell the Coffee utilizes the intensity of the art form Butohto convey a serious problem: the environmental repercussions of non-recyclable waste. The tradition and techniques of Butoh are rooted in an art form that has the power to bring us back to our humanity and become closer to the Earth through meditative and hypnotic movement motifs. This includes uncomfortable truths we need to face, such as confronting the “garbage,” or grotesque parts of our society. The performers will literally dance through garbage; a set made of collected unsalvageable coffee cups. This initiative will serve to increase environmental awareness in New York City through dance and have a tangible impact on our ecosystem.

Currently, Americans are responsible for a staggering 58% of the paper cup consumption in the world. NYC counts 212 Starbucks, 454 Dunkin Donuts, and 974 other coffee shops for a total of 1,700 coffee shops within the five boroughs. This results in a daily mountain of non-recyclable coffee cup trash, which, for the most part, ends-up in a landfill. There are 4100 coffee shops in the Tri-State area alone, which represents an estimated 14 million cups that New Yorkers will generate over the next 10 years. The paper cups used at coffee shops across NYC are laminated with a plastic resin, polyethylene, which helps keep beverages warm and prevents leaking but also prevents the cup from being recycled. Once in a landfill, the paper begins to decompose, releasing methane, a greenhouse gas with 23 times the heat-trapping power of carbon dioxide. This issue is directly linked to the threat of global warming.

Wake Up and Smell the Coffee originally premiered at Triskelion Arts in 2015. It included a set made of 1500 used, disposable coffee cups, illustrating the extensive amount of non-recyclable waste generated by society. Since that performance, the state of waste in New York hasn’t changed for the better, so a revised and amplified 2017 version, now featuring New York Butoh star Vangeline backed by a company of nine members from Vangeline Theater, will expand the reach of the work’s message with new choreography, performance elements, and panel discussions with environmental scientists such as Paul Bartlett, Environmental Services Consultant and scholar in residence at St. Peter’s University.The show will inspire audience members to make a positive lifestyle change. Vangeline Theater will partner with the public education program GreeNYC, and will have audiences sign pledge forms online. Programs will be printed on recycled materials. Sustainable, bpa free, recycled & recyclable durable mugs will be available at each performance to encourage the discontinuation of buying and disposing coffee cups.

Vangeline is an award-winning teacher, dancer, and choreographer specializing in the Japanese postwar avant-garde movement form Butoh. She is Artistic Director of The Vangeline Theater Inc., an all-female dance company that she founded in 2002. Firmly rooted in the tradition of Japanese Butoh, The Vangeline Theater is committed to providing programming, performances and classes that honor the legacy of the art form while moving it forward in the 21st century.

Since its inception in 2002, Vangeline Theater has fused the post-apocalyptic vision of Butoh (the Japanese dance form that developed after Hiroshima) with the near-cinematic aesthetic of 21st Century science-fiction noir. The mission of Vangeline Theater is to be at the forefront of the artistic movement to address environmental awareness providing artistic, socially responsible engagements in our community. Vangeline Theater was selected as a finalist for the Creative Climate Awards in NYC in 2016.

The Vangeline Theater’s mission is to educate the public about Butoh, promoting an understanding of Butoh dance history and its social and cultural significance; to connect Butoh to other art forms and disciplines; and to build community through Butoh. The Vangeline Theater is home to the New York Butoh Institute, dedicated to the advancement of Butoh in the 21st century, with a special emphasis on scientific research as it relates to Butoh. Vangeline Theater aims to be at the forefront of the artistic movement to address environmental awareness providing artistic, socially responsible engagements in our community. Vangeline is the winner of the 2015 Gibney Dance’s Beth Silverman-Yam Social Action Award recognizing excellence in the field of Community Action.  Vangeline’s Butoh work has been commissioned by Atlantic Records’ Grammy award-winning artist SKRILLEX, and is featured in a major motion picture “The Letter” with James Franco and Winona Ryder, as well as on CNN’s Great Big Story. She is currently in collaboration with Grammy Award winner Esperanza Spalding and Japanese musician Yuka C. Honda on the project Virgin Writes.

This program is supported, in part, by public funds from the New York City Department of Cultural Affairs in partnership with the City Council.