The Art of The Duo

At Sheen Center for Thought & Culture 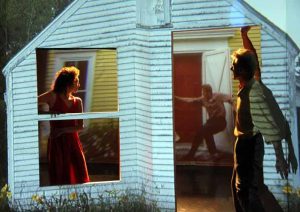 Voyeur (2012) is inspired by artist Edward Hopper’s world of color, light, perspective, and under-the-surface eroticism. Fragmented moments of private lives are witnessed through windows and doorways; the presence of a seen or unseen viewer lies at the heart of Voyeur. The work also includes an installation component: prior to the performance, the audience is invited to enter the set to explore the projections and live cameras. Video Preview: https://vimeo.com/62310573

In Remembering What Never Happened (2015), memory slips seamlessly into imagination, delving into the changeable nature of time, form, perception, and identity. The performers merge with video projections of their images that morph and explode into digital re-interpretations of the human body; scenes shot on location in the Mojave Desert transform into surreal landscapes. Video Preview: https://vimeo.com/138529850

Art Bridgman and Myrna Packer, Artistic Directors of Bridgman|Packer Dance, have collaborated as performers and choreographers since 1978. Their innovative work developing “Video Partnering” — the integration of live performance and video technology — has been acclaimed for its highly visual and visceral alchemy of the live and the virtual.

Named after the late Archbishop Fulton J. Sheen, best known for his popular radio and TV ministry in the 1950s and 60s, The Sheen Center for Thought & Culture is a project of the Archdiocese of New York with the mission of showcasing works in the performing and visual arts, lectures and symposia that highlight the true, the good, and the beautiful as they have been expressed throughout the ages. The state-of-the-art complex has a 273-seat proscenium theater equipped with five-camera high-definition livestream capability and a multi-track recording studio with thirty-two onstage inputs; an 80-seat black box theater; four rehearsal studios; and an art gallery. This facility is the newest arts center in Manhattan in 35 years and a great addition to the growing artistic community in the East Village/NoHo.

Sheen Center is located at 18 Beecker Street, between Mott and Elizabeth. Subways: 6 to Astor Place; L to 1st Avenue and 14th Street; or R to 8th Street. For more information, visit www.sheencenter.org