Set sail on a surreal nautical journey where mythical beasts, haunting shipwrecks, ruins of a lost civilization and the great Leviathan whimsically prey on visitors of Times Square. 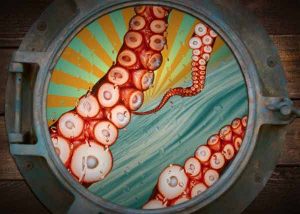 Influenced by imagery from Victorian patterns, letterpress printing, archetypal symbols, and apocalyptic themes, artist Beau Stanton – fresh from a massive commissioned mural for Dubai Walls – is known for his deeply metaphorical oil paintings that fuse these elements with modern environmental realities. Translating oil to animation, Stanton has preserved his antiquated language with a style that emulates early moving images, pulling inspiration from the zoetrope and the Lumiere brothers’ cinematograph.

In Voyage, a multi-channel animated narrative, Stanton’s detailed oils come to life to follow the journey of a ship through a series of surreal events and environments. From the first person perspective, the viewer is taken on an adventure deep under the sea, where we encounter mythical beasts, haunting shipwrecks, the ruins of a lost civilization, and the great leviathan. With a whimsical and somewhat Victorian feel, Voyage combines ancient maritime legends, man’s eternal struggle with nature, and current environmental concerns with our everlasting thirst for discovery.

Beau Stanton, Artist, said, “The main idea for Voyage was to create an immersive experience where the viewer feels like they have just wandered into another world by visually submerging Times Square below the sea.”

Tim Tompkins, President of the Times Square Alliance, said, “Brilliantly, the artist takes our everyday place and turns it inside out to take us on a mythical voyage in which we battle a kraken and the high seas through a Victorian graphic lens.”

Sherry Dobbin, Times Square Arts Director, said, “When Lori Zimmer first introduced me to Beau’s work, I was mesmerized by looking through the portholes of a ship to these small animated videos.  I loved the environments he created.  It took some time to figure out how we would invert the images and think about being inside the ship, where the screens would be the portholes looking out.”

Lori Zimmer, Curator, said, ““I am so excited to invite the busiest center of New York – Times Square – to immerse themselves in the nautical mind of Stanton’s work each night in July! His animations reflect the painstaking detail and Victorian influence of his oil paintings, and bring viewers into the underwater journey of Voyage, splashed across the iconic screens of Times Square.”

Fred Rosenberg, President of the Times Square Advertising Coalition, said, “The committee was taken with this Brooklyn artist’s ambition and imagination.  Times Square is where dreams come to life, and with this Midnight Moment we’re proud to light up our screens with the vision of this talented local artist.”

The following digital screens are participating in the July Midnight Moment:

Times Square Arts, the public art program of the Times Square Alliance, collaborates with contemporary artists and cultural institutions to experiment and engage with one of the world’s most iconic urban places. Through the Square’s electronic billboards, public plazas, vacant areas and popular venues, and the Alliance’s own online landscape, Times Square Arts invites leading contemporary creators to help the public see Times Square in new ways. Times Square has always been a place of risk, innovation and creativity, and the Arts Program ensures these qualities remain central to the district’s unique identity. Generous support of Times Square Arts is provided by the. New York State Council on the Arts, the New York City Department of Cultural Affairs, and the National Endowment for the Arts. Visit http://www.timessquarenyc.org/times-square-arts/index.aspx for more information. Follow us on Twitter and Instagram at @TSqArts.

and multimedia animations. Focusing on meticulous technique and craft, Stanton’s work is heavily informed by historic ornamentation, religious iconography, and classical painting. A keen interest in iconic visual symbols and Jungian archetypes often provides the foundation for his images. Stanton is originally from California where he studied Illustration at Laguna College of Art and Design. He relocated to New York after graduating in 2008 and continues to live and work in Red Hook, Brooklyn, constantly drawing inspiration from local nautical history. His work has recently been shown in a 12th Century crypt, on the Berlin Wall, in a Fiat 500, and in galleries worldwide.