At the Ailey Citigroup Theater 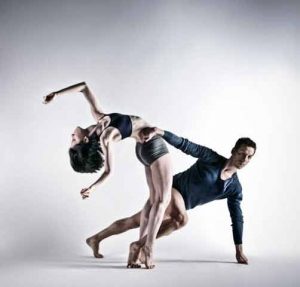 The Ailey Citigroup Theater, 405 W. 55th Street, NYC (at Ninth Avenue). The Dance Gallery will be presented on Friday, September 25 and Saturday, September 26 at 7:30pm and Sunday, September 27 at 7:00p.m. Tickets are $20 (general admission) and are available at www.smarttix.com or by phone at 212-868-4444. For discounted tickets to multiple shows, email Astrid von Ussar, [email protected].

NEW YORK, August 19, 2015—The Dance Gallery Festival, presented by VON USSAR danceworks for the 9th consecutive year, will feature original works from eighteen rising choreographers. The festival features acclaimed choreographers, Maurice Causey and Joshua L. Peugh. Each artist performs twice during the 3-night festival weekend, September 25-27 at The Ailey Citigroup Theater. In addition to seasoned artists, the festival features new talents that are making a name for themselves. The festival continues to pride itself on being able to present the best artists known now and the best to come.

“I enjoy being able to welcome back artists from previous years,” said Astrid von Ussar “I like seeing how they have grown! By furthering emerging choreographers we are fulfilling our mission and I hope we are creating a platform of creative growth and development.”

For the sixth consecutive year, Dance Gallery Festival will also perform in Texas at Sam Houston State University (SHSU) on October 2-3, 2015 at 8:00pm. Through an exchange/partnership with SHSU the festival is able to offer artists a unique opportunity to perform their piece at two different venues.

The choreographer and company line up for the NYC Dance Gallery Festival include:

The choreographer and company line up for the Texas Dance Gallery Festival include:

ABOUT THE DANCE GALLERY FESTIVAL:

The Dance Gallery Festival was created in 2007 and has since become a well-known festival with showcases in two states NY and TX. DGF partnered with Sam Houston State University in 2009 and offers paid guest artist residencies to select participating companies. The production of modern concert dance is often challenged by the scarcity of suitable and affordable performance venues. DGF addresses this problem by providing a state-of-the-art theater, complete with production staff, marketing and public relations support to showcase each choreographer’s work. In the festival’s nine-year history, a tremendous amount of talent has been showcased.  Our aim is to continue cultivating that talent by providing performance opportunities and increasing exposure for emerging and established dance companies. For more information please visit: www.dancegalleryfestival.com.

ABOUT NYC ARTISTS AND COMPANIES:

Ad Deum Dance Company is a professional modern/contemporary dance company based in Houston, Texas, founded in 2000, and directed by Randall Flinn. Dancers have come to Ad Deum from around the world to be connected with a community of artists that share a common vision of creating and performing excellent works of dance that serve to wash over the heart and soul of humanity with relevant meaning and redemptive hope.

Ashley Clos is from The Woodlands, Texas. She is currently pursuing an MFA in Dance from Sam Houston State University. As a freelance arts writer, she aims to be an ambassador and supporter for the dance community of Houston. Ashley’s choreography has been showcased at the American College Dance Association.

Travis Prokop is an Assistant Professor at Lamar University. He received his MFA and served as adjunct professor for Sam Houston State University and Southern Methodist University. Travis’ choreographic works have been produced at the American College Dance Association, and he has choreographed productions including Trojan Women and Chicago.

Dark Circles Contemporary Dance (DCCD) was founded in 2010 in Seoul, South Korea. The Company’s newest branch—based in North Texas and lead by internationally award-winning choreographer and Dance Magazine “25 to Watch” breakout star of 2015, Joshua L. Peugh—has been hailed as “the area’s most exciting dance company” (Star-Telegram). The young company has been praised as “frequently stunning, and always fascinating” (DFW.com) and commended for innovative combinations of classical technique and modern movement styles. DCCD explores the depths of human connections within a multicultural framework, taking a cross-cultural approach to the moving body. DCCD is dedicated to bringing the progressive work of international choreographers and dancers to a worldwide audience. http://www.darkcirclescontemporarydance.com

Established in 2010, GIERRE J GODLEY/PROJECT 44 (Queens, NY) is an all male dance group that serves as the artistic platform for choreographer Gierre Godley. The company strives to erase all preconceived notions about masculinity and the role of a male performer in the arts. With a visceral approach to choreography, the works of PROJECT 44 aim to showcase the beauty, versatility, and athleticism of male performers. Mostly recently PROJECT 44 was award the Upstream Residency Grant at the Kaatsbaan International Dance Center. This residency laid the ground works for the company’s tour to Montreal, Canada. Since, PROJECT 44 made its Berlin debut in August of 2015 with the premier of their work “JOHN” and has had its first NYC season at Danspace at St. mark’s Church.

Jacksonville Dance Theatre a critically acclaimed contemporary dance and performative company dedicated to creating and promoting excellence in the field of professional dance and per Currently in its fourth season under the artistic direction of Rebecca R. Levy, JDT continues to produce and commission work that supports creative innovation and exchange through dance making. Learn more at www.jacksonvilledancetheatre.org

Maurice Causey is an American born European based artist. He began studying ballet in his hometown of Florence, Alabama at the age of 15. Maurice has danced with several companies including National Ballet of Canada and William Forsythe’s Frankfurt Ballet. Mr. Causey has been Ballet Master for both the Royal Swedish Ballet and The Netherlands Dance Theatre 1. He has guest taught and choreographed for companies and schools internationally and as well stages Ballets by Forsythe.

Mersiha Mesihovic/ CircuitDebris Born and raised in the 80´s in Mostar, Mesihovic’s artistic upbringing is grounded in classical piano, Bosnia’s cultural traditions, and an intense influence of America’s popular culture. Her work expresses her passion for movement invention, human behavior and pushing boundaries of what dance should address.

Most recently TheWorldDances.com and CircuitDebris referred to as a vibrant, eclectic, “fresh”, NYC DANCE COMPANY to watch, hailed Mesihovic as “Rising NYC Choreographer”.

Nicolay Dance Works, Dana E. Nicolay, Artistic Director, toured internationally with the Royal Winnipeg Ballet, and worked with Bill Evans at Contemporary Dancers Canada. His work has been performed at the Kennedy and recognized for excellence by various organizations. He is a Certified Laban/ Bartenieff Movement Analyst and holds the MFA in Contemporary Dance from TCU. He is Professor of Dance at Sam Houston State University.

NobleMotion Dance is one of Houston’s premier contemporary dance companies and has received critical acclaim for their “extraordinary athleticism” and “cuting edge” programming. NobleMotion Dance accolades include over 30 positive local and national reviews and were described as one of Houston’s “A-list” dance companies in Dance Magazine. NMD has a broad repertory and tours nationally. For more information, visit us at www.noblemotiondance.com.

Quinton Guthier is originally from Madison, Wisconsin and trained at Interlochen Arts Academy in Northern, Michigan. He is a recent graduate of Fordham University and The Ailey Schools joint BFA program. The work ‘Honey Won’t You Stay’ was part of his Senior Thesis in Choreography. His mentor, Matthew Rushing, helped him closely on the project in order to develop his artistic voice. Mr. Guthier is extremely grateful to be able to present this work once more.

Robert J. Priore dances with Company E. Robert is also the Choreographer-In-Residence for the City Dance Conservatory as well as the Artist-In-Residence. Robert is one of two chosen artists this season for the prestigious “Local Commissioning Dance Project” at the John F. Kennedy Center for the Performing Arts. Last year he received the “Audience Choice Award” at the Dance Gallery Festival.

RudduR Dance‘s mission is to use contemporary dance as method of holding a mirror to society while exploring the place where beauty, innovation, education, collaboration, truth, and movement meet, guided by the artistic director and choreographer, Christopher Rudd. His goal is to investigate different themes of the human condition, with an emphasis on what unities us as a species.

SANCE/ Satomi Ithohara began her ballet training in Yamaguchi, Japan. She continued her education at Utah Valley University on a scholarship where she earned a BFA in Dance. Satomi moved to New York to pursue her dream as an artist. She has worked with independent choreographers and companies in NYC, and her choreographic work has presented in various festivals and showcases in NYC.

Shaun Boyle has performed with both classical ballet and contemporary companies including Cedar Lake Contemporary Ballet and BalletMet. Her choreography has been showcased in the United States and Europe at venues such as the Joyce Soho Theater in New York and The Robin Howard Theatre in London. Shaun currently teaches at the Dance Department at the University of California, Irvine.

The People Movers/ Kate Ladenheim (BFA The Boston Conservatory) is the Artistic Director and Choreographer of The People Movers. She is known for creating work that is socially, politically, and culturally relevant, as well as structured, witty, and human. Kate is a 2014-2015 Leimay Fellow, and the winner of the Rider University Emerging Choreographer Competition. Kate is also the founder and producer of CRAWL.