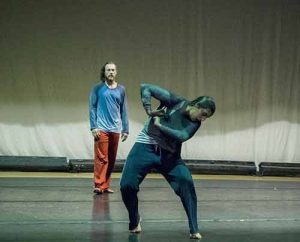 Separati, a new work by Shannon Gillen, in collaboration with the performers, features dancers Jason Cianciulli, Martin Durov, Laja Field, Lavinia Vago, and Emma Whiteley, set to original scores by Martin Durov in collaboration with Gillen, with costumes by Joey Blaha, set design by JC Machine and Tool company, and lighting design by Barbara Samuels. The running time is 60 minutes.

Separati enters the turbid psychic space of highway travel and anonymous companionship. Caught up at a midway point, five characters travel through the past, present and dark hallucinatory projections of the future. Stilled periods of waiting juxtapose wild physical bouts of surreal movement, as reality gives way to the imagination. What is the distance between where we have come from and where we want to go? Between what happens to us and who we are? Can the space between bodies and ideas ever be joined? And if not, can we exist in the middle ground of separation?

Shannon Gillen is the founder, artistic director and choreographer of New York’s visionary new dance company VIM VIGOR DANCE COMPANY. Gillen is one of NYC’s most sought-after choreographers with an established and passionate audience following and commissions at prestigious national and international venues. Through a prolific body of work that galvanizes the body’s potential to express intellectual and emotional concepts, Gillen has pioneered a recognizable artistic language that possesses heroic physicality, electric emotional life, and cinematic imagery that illuminates and heightens the narrative imagination. In a 2013 Brooklyn Magazine article that named her as one of city’s top twenty artists, Gillen was championed for her “emotionally compelling” work that “transcends the things it references and achieves a sort of platonic ideal of intelligent and elevated movement.” And L Magazine later wrote that Gillen’s dancers “force you to the edge of your seat, breath held, hands clenched.”

In 2013 she was invited to join the esteemed Johannes Wieland Company at the Staatstheater Kassel, Germany as a full time company member. She danced in 56 international performances and was singled out in the press for being “in top form, a feat of strength” (HNA, German News). While dancing in Germany, Gillen burst into the choreographic scene receiving 3rd Prize at the International Solo-Tanz Competition in Stuttgart and commissions at the Mainfranken Theater Würzburg and the TIF Theater in Kassel. She was also selected as a THINK BIG choreographer in residence with the Staatsoper in Hannover, creating a piece that premiered at the TANZ Theater International Festival. In Fall 2014 she returned to the United States where she was noted in The Brooklyn Rail for her “fierce physicality and rigorous inquisitiveness in her work.” Recently she was commissioned by two of New York State’s most distinguished dance colleges: New York University’s Second Avenue Dance Company and the Purchase Dance Company at SUNY, with performances at New York Live Arts where her creation premiered alongside works by Aszure Barton and Doug Varone. She was also recently selected as a Principal Company at the prestigious Springboard Danse Festival in Montreal, where she workshoped a new creation in June 2015. Additionally she was selected as a recipient of Hubbard Street’s International Commissioning Competition for 2015/2016.

* selected as a Principal Company to the prestigious Springboard Danse Festival in Montreal (2015)
* THINK BIG residency fellowship in Hannover (2014)
* 3rd Prize in dance at the Solo-Tanz Festival in Stuttgart with Germany tour (2014)
* special mention as a choreographer of note in The Brooklyn Rail (2014)
* recognition as one of the top 20 artists in Brooklyn Magazine (2013)
* Residency with Random Collision/Grand Theater in Groningen, NL (2013)
* awarded the Dean’s Fellowship at Tisch School of the Arts/NYU (2012/2013)
* first emerging artist selected by Christopher Wheeldon for the Steps Repertory Company (2012/2013)
* commissions for PULSE Art Fair in NYC and Miami as part of Art Basel (2011/2012)
* Artist in Residence with The Stella Adler School of Acting (2011)
* Swing Space Artist with the Lower Manhattan Cultural Council (2010)
* Finalist in the A.W.A.R.D.S. Show! at Joyce SoHo (2010)
* Artist in Residence at LMCC’s Swing Space (2009)
* Artist in Residence at Dance New Amsterdam (2009)
* Fresh Tracks Artist with Dance Theater Workshop (2009)

Gillen graduated from The Juilliard School with a BFA (2003) and from Tisch School of the Arts/NYU (2013), where she was awarded a full fellowship to obtain her MFA. Dedicated to the advancement of movement-based education, Gillen is a leading contemporary dance teacher with a large following of dancers in both the professional and higher education arenas. She holds faculty teaching positions at SUNY Purchase College, Mark Morris Dance Center, Peridance Capezio Center and Gibney Dance, and is a regular guest teaching artist at The Juilliard School, The Hartt School, and New York University/ Tisch School of the Arts. With VIM VIGOR, Gillen will establish a new platform for contemporary dance education in NYC through company workshops and intensives.

GK ArtsCenter is the newest cultural center in New York City boasting four 2,000 sq. foot, column free studios along with a 300-seat theater that doubles as fifth studio.  Located in DUMBO Brooklyn, GK ArtsCenter is the home to the Gelsey Kirkland Ballet and Academy.  Performing artists use the space to create, rehearse and teach in the incomparable studios one stop from Manhattan.