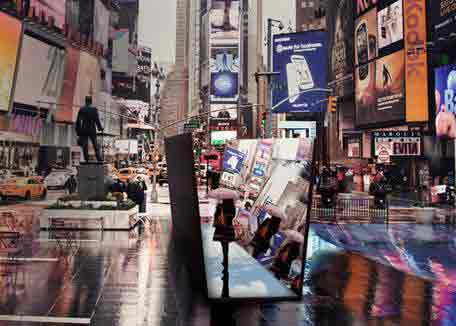 Times Square Arts, Cuban Artists Fund, And Rachel Valdés Camejo Present The Beginning Of The End – A Chance To Walk In A Human Kaleidoscope

Times Square Arts, Cuban Artists Fund and Cuban artist Rachel Valdés Camejo unveil The Beginning of the End, an interactive and reflective monument that asks visitors to investigate the relationship of the viewer to the object and its surrounding space. The unveiling will take place on Tuesday, October 18th at 11:00am on the Broadway Pedestrian Plaza between 46th and 47th Streets

Through a corridor of three mirrored surfaces, a floor and two angled walls, the interactive installation captures and multiplies the environment of Times Square on either side and allows visitors to walk on a reflection of the sky under their feet.

Rachel Valdés Camejo’s contemplative monument – her first solo show in the United States – asks visitors to step inside and reassess their perspective on an entirely different visual reality, how they see themselves in the environment that surrounds them, and how that relationship changes as the reflections create new visual possibilities.