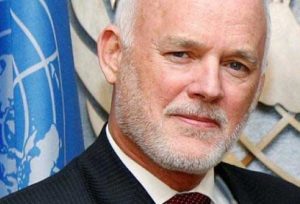 Fijian Permanent Representative to the United Nations and President-elect of the 71st session of the UN General Assembly, Peter Thomson, will deliver the sermon during the Holy Eucharist on Sunday, September 18th at 11 a.m., at the Cathedral of St. John the Divine, located at 1047 Amsterdam Avenue (at 112th Street). The Cathedral of St. John the Divine has welcomed the President of the General Assembly to the pulpit at the start of the assembly for the last 30 years.

Thomson, the first assembly president from the Pacific Island states, will be tasked with the process of searching for a new UN Secretary General to replace Ban Ki-moon. He is also expected to advocate for more dialogue on issues regarding ocean ecosystems, climate change, and sustainable development.