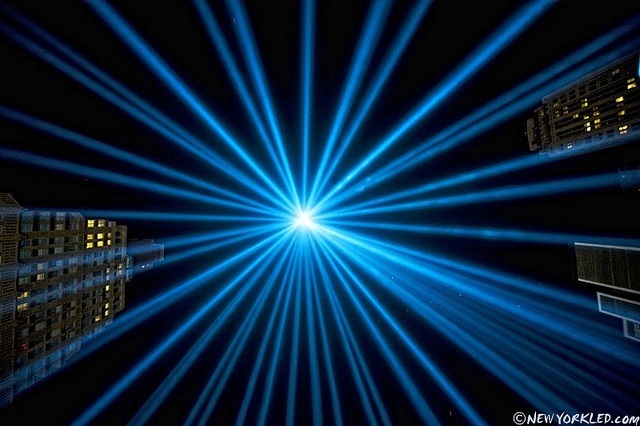 The hours of operation for the 9/11 Memorial and Museum are as follows:.

The Lights themselves will be cast into the sky from sunset until dawn the following morning.

As in years past the tribute in light will once again be shooting into the sky over lower Manhattan on the 16th anniversary of that most fateful day, September 11, 2001.

The beams comprised of 88 refrigerator-sized 7,000-watt xenon searchlights are positioned in two 48-foot squares that echo the shape and orientation of the twin towers.

Yours truly has twice been at the lighting ceremony for these lights and it’s quite the experience. One which I’ll never forget. Aside from having the opportunity to photograph them from various angles, I was also allowed to enter into the center of one of the two groupings. Whilst within, I looked up and couldn’t believe what I was seeing. The first words that came of my mouth were, “This can’t be real”, yet the words in my mind were, “oh my God!” It was a surreal experience. One which I wish everyone were able to see firsthand. Alas that wouldn’t be possible and honestly, at the core of that day’s and that night’s intentions is to remember those many lives lost, the damage done and the will of those many first responders who came to folks’ rescue.

So join us as we head down to the immediate area alongside the many other thousands who’ll be doing the same. Remember, the lights can be seen from near and far, and far and wide.

The following is from the official 9/11 Memorial and Museum website:

On the anniversary of 9/11, the Memorial Plaza is open to the public from 3 p.m. to midnight for the viewing of Tribute in Light. The installation can also be viewed from a 60-mile radius around lower Manhattan.

Below are photos yours truly has taken over the years.