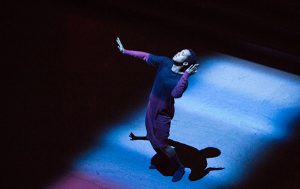 Trajal Harrell. In one step are a thousand animals

The Roy and Niuta Titus Theater 2

In one step are a thousand animals is the title Trajal Harrell (American, b. 1973) has given his two-year Annenberg Research Commission Residency project. One of the most prominent choreographers and dancers of his generation, Harrell confronts the history, construction, and interpretation of modern and contemporary dance. Starting from the premise that history is always partly a fiction, Harrell works with historical imagination as a way to rethink how we process and interpret our pasts. Thus Harrell’s works often make use of hybrid forms of movement, drawing from various sources including postmodern dance and voguing, for example in his piece Twenty Looks or Paris Is Burning at The Judson Church.

Two years ago Harrell began investigating the history of butoh, a Japanese dance form created in part to resist the conservatism permeating postwar choreography. As Harrell learned more, his research focused specifically on the life and work of Japanese choreographer Tatsumi Hijikata (1928–86), a butoh pioneer. Hijikata situated butoh as a transgressive and surrealist dance form, dealing with themes of death, criminality, and corporeality. Harrell’s investigation culminated in the performance Used Abused and Hung Out to Dry, which was commissioned by MoMA as part of the performance series Performing Histories: Live Artworks Examining the Past, in connection with the exhibition Tokyo: The New Avant-Garde 1945–1970, and was performed in The Agnes Gund Garden Lobby in 2012.

In one step are a thousand animals will include a further in-depth exploration of Hijikata’s work, the aesthetic possibilities of butoh. At the same time, Harrell is interested in gaps and holes in history and diving into those to discover new relations. Inviting Harrell to pursue his research at MoMA represents a significant continuation of the initiative to involve artists in rethinking the Museum’s performance program. Through a series of performances and discursive events, including the creation of a new piece for 2016, Harrell will also focus on the conditions of the museum space and what dance in museums can make visible that other combinations of media, processes, and spaces cannot.

In one step are a thousand animals began in September 2014 with The Practice, in which Harrell offered insights into his working method, inviting participation from renowned musicians, stylist, singers, and dancers.

For this second iteration, Harrell engages in a conversation with Eiko Otake, Japanese choreographer and dancer, who works primarily with her partner Koma. Both Eiko and Koma have studied with Kazu Ohno and Hijikata, and moved to New York in the 1970s, developing their own choreographic practice. Eiko & Koma were also part of MoMA’s performance series Performing Histories: Live Artworks Examining the Past in January 2013 with The Caravan Project. Together with Sam Miller, the President of the Lower Manhattan Cultural Council, the two artists, in their first public conversation, will talk about the artistic legacy of avant-garde dance forms in 1960s Tokyo, Eiko’s integral participation in that scene, and the parallel aesthetic threads in their work.

The project is made possible by MoMA’s Wallis Annenberg Fund for Innovation in Contemporary Art through the Annenberg Foundation.