Over 190 Performances Set For

TNC’s 27th Lower East Side Festival Of The Arts

Artistic output of this fabled neighborhood will be on display again to live audiences. 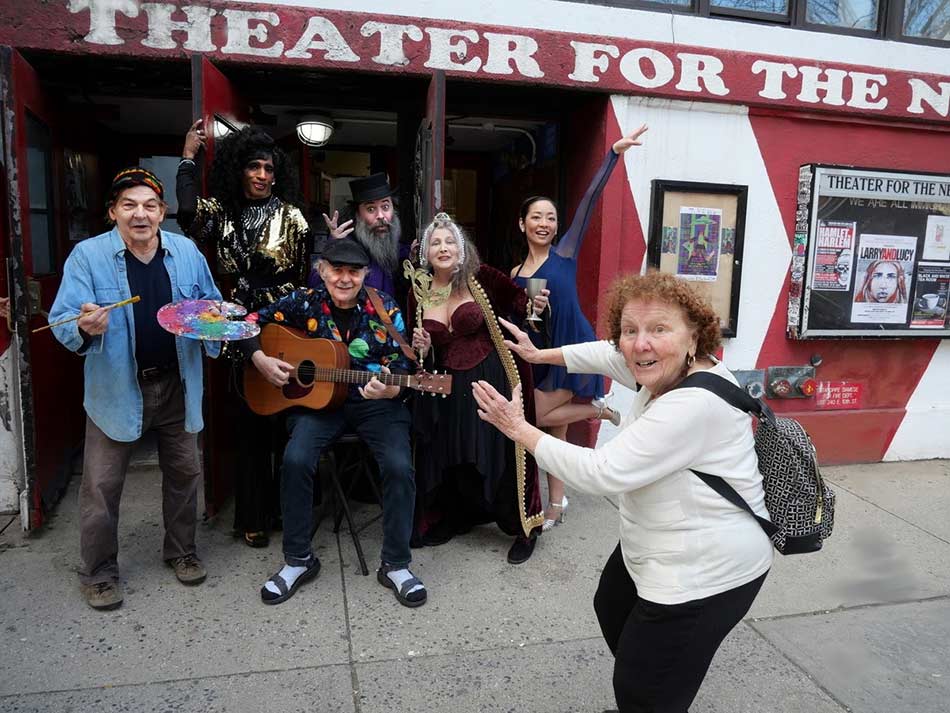 NEW YORK, May 1 — With the roster still building, Theater for the New City has currently scheduled over 190 performing arts organizations, independent artists, poets, puppeteers and film makers for its 27th annual Lower East Side Festival of the Arts, which will be mounted May 27 to 29 in and around Theater for the New City, 155 First Ave. (at E. 10th Street).  Admission is free but donations will be gratefully accepted.

The festival has been presented annually since 1996, although in 2020 it was produced online due to pandemic concerns.  This year it is back full-scale as an in-person, indoor and outdoor, live audience event.  A cohort of theater, dance, performance, music, film, literary and visual artists are participating on all three days. An afternoon of performances for and by kids has been reinstated for Sunday afternoon. A fine art show will be hanging throughout the fest in the theater’s lobby gallery. A film program will be presented Saturday from 1:00 PM to 11:00 PM, featuring works by auteurs from the Lower East Side/East Village along with works that reflect the essence of the neighborhood.

This year, the festival is mounted with the theme “Artists Embrace Liberty And Justice For All.”

Indoor performances will take stage from 6:00 PM to midnight each day, utilizing two of TNC’s four theaters. From 10:00 AM to 6:00 PM Saturday, vendors and food sellers, including booths from nearby restaurants, will set up in the closed-off block of East Tenth Street between First and Second Avenues.  On Saturday from 1:00 PM to 5:00 PM, an outdoor stage adjoining the theater will offer music and multi-discipline performances curated by Richard West. On Saturday afternoon inside in the Johnson Theater, there will be performances by and for children, curated by Donna Mejia and emceed by John Grimaldi.  On Saturday from 1:00 PM to 11:00 PM in the Cabaret Theater, over 15 films curated by Eva Dorrepaal will be screened.  On Sunday from 4:00 PM to 7:00 PM in TNC’s Community Theater, there will be a “poetry jam with prose on the side” curated by Lissa Moira and featuring Melanie Maria Goodreaux.  Throughout the festival, an art show curated by Carolyn Ratcliffe will grace the TNC lobby spaces.  This art show will have its own free, special opening Wednesday, May 25 from 5:30 to 8:00 PM.

Proof of vaccination will be required for all indoor events.  Masks are optional as of this writing.

The performers’ roster is still building as of this writing and the number of applicants exceeds any previous year.  A list of participating artists, updated periodically, can be viewed at http://www.jsnyc.com/season/LES-2022.htm.

Selected performances will be live-streamed on the TNC website, www.theaterforthenewcity.net, for those who are home-bound or live far away.

Excerpts of two recent sold-out TNC shows will be presented: “Hamlet in Harlem” and “The Un-American” (schedule TBA).

The Festival started in 1996 as a three-day, indoor and outdoor multi-arts festival intended to demonstrate the creative explosion of the Lower East Side and the area’s importance to culture and tourism for New York City. It employed two theater spaces at TNC plus the block of East Tenth Street between First and Second Avenues.  For the past 26 years, it has been organized by TNC and a coalition of civic, cultural and business leaders and presented free to an average attendance of 4,000.

The concept of the festival was developed by Crystal Field, Executive Artistic Director of TNC and Esther Cartegena (d. 2006), President of Loisaida, Inc., to portray the Lower East Side (LES) as a haven for artists and artistic creation.  The region is a unique multi-ethnic community with an unusually high level of artistic vitality.  Large populations with differing languages and cultures coexist there successfully and a large artistic population helps glue the neighborhood together.  Its theaters are also an unprecedented source of tourism.  Sam Shepard’s Pulitzer Prize-winning play, “Buried Child,” was commissioned and first produced by TNC.  The committee envisioned an event that would demonstrate the region’s cultural fervor, its large artistic population and its multiplicity of ethnic influences to contradict the neighborhood’s stereotype as a dangerous refuge for drug dealers and criminal activity.

The first festival, presented June 14 to 16, 1996, featured over 100 attractions, drew favorable press and attracted crowds from all around the City.  Its success prompted TNC to continue the festival as an annual event.