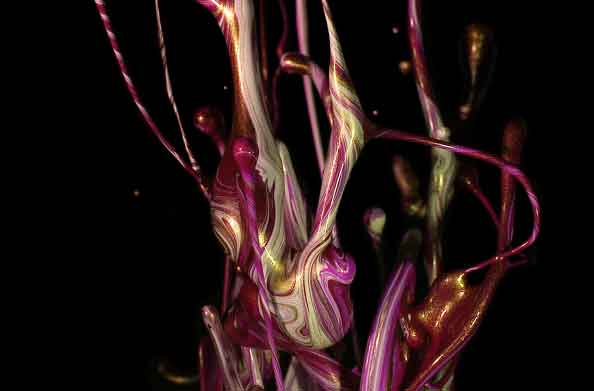 Propelled by sound, elegant splashes of color fly in slow motion across a dark screen. Part of a four-video art series designed to express Japan’s four seasons, Sound of Ikebana (Spring) uses the unpredictable natural phenomena of sound vibrations and colorful paint of different consistencies to create intriguing and mesmeric shapes that evoke the art ofikebana –Japanese flower arrangement based around asymmetrical triangular forms. The colors are inspired both by spring images such as apricot flowers and cherry blossoms, as well as the white and gold of the Japanese New Year. Tosa’s slow-motion liquid – filmed at 2000 frames per second – blends artistic traditions with cutting-edge technology and organic designs, inviting audiences to a contemplative visual connection with traditional Japanese culture and its history.

On Tuesday, April 4, visitors can join Naoko Tosa for a viewing of Sound of Ikebana (Spring). Please arrive by 11:30 pm for the 11:57 pm viewing on Duffy Square at Broadway and 46th Street.

Naoko Tosa, Artist, said “I believe in the artistic concept that ‘various cultures in the world are connected just as one from the ancient time at unconscious level.’ Connecting this belief to a computer, I have created a new concept called ‘iCulture’, creating a new art frontier to lead society to a richer future.”

Tim Tompkins, President of the Times Square Alliance, said, “It seems only fitting that Tosa’s piece, which combines sound and vibrant color with international culture and history, should come to Times Square, where influences from all around the world settle into our colorful hustle and bustle.”

Fred Rosenberg, President of the Times Square Advertising Coalition, said, “Times Square has always been a place where cultures collide from historical traditions to art from around the world.  We’re pleased to partner with the Japan Society Gallery to bring such a bright celebration of spring to our screens.”

Times Square Arts, the public art program of the Times Square Alliance, collaborates with contemporary artists and cultural institutions to experiment and engage with one of the world’s most iconic urban places. Through the Square’s electronic billboards, public plazas, vacant areas and popular venues, and the Alliance’s own online landscape, Times Square Arts invites leading contemporary creators to help the public see Times Square in new ways.  Times Square has always been a place of risk, innovation and creativity, and the Arts Program ensures these qualities remain central to the district’s unique identity. Generous support of Times Square Arts is provided by the. New York State Council on the Arts, the New York City Department of Cultural Affairs, and the National Endowment for the Arts. Visithttp://www.timessquarenyc.org/times-square-arts/index.aspx for more information. Follow us on Twitter and Instagram at@TSqArts.

Naoko Tosa is an internationally renowned Japanese media artist. After receiving PhD from the University of Tokyo, she was artist fellow at the Centre for Advanced Visual Studies at MIT from 2002 to 2004. Currently she is a professor at Kyoto University. Her artworks have been focusing the expression of Japanese tradition and culture utilizing technology. She exhibited her artworks at the Museum of Modern Art in New York, the New York Metropolitan Art Museum, ARS Electronica, etc.

In 1997, the L’Oreal Grand Prix awarded her art and science first prize. In 2012 she exhibited her artwork on LED screen of 250mx30m at Yeosu Expo in Korea. She has been appointed by the Agency for Cultural Affairs, Government of Japan as a Japan Cultural Envoy 2016.

Japan Society Gallery is among the premier institutions in the U.S. for the exhibition of Japanese art and is a platform for reconsidering Japanese culture within a global context. Extending in scope from prehistory to the present, the Gallery’s exhibitions since 1971 have covered topics as diverse as classical Buddhist sculpture and calligraphy, contemporary photography and ceramics, samurai swords, export porcelain, and masterpieces of painting from the thirteenth to the twenty-first century.  Each exhibition, with its related catalogue and public programs, is a unique cultural event that illuminates familiar and unfamiliar fields of art.

Founded in 1907, Japan Society is a multidisciplinary hub for global leaders, artists, scholars, educators, and English and Japanese-speaking audiences. At the Society, more than 100 events each year feature sophisticated, topically relevant presentations of Japanese art and culture as well as open and critical dialogue on issues of vital importance to the U.S., Japan and East Asia.  An American nonprofit, nonpolitical organization, the Society cultivates a constructive, resonant and dynamic relationship between the people of the U.S. and Japan.

Japan Society is located at 333 East 47th Street between First and Second Avenues (accessible by the 4/5/6 and 7 subway lines at Grand Central or the E and M subway lines at 53rd St. and Lexington Ave.)