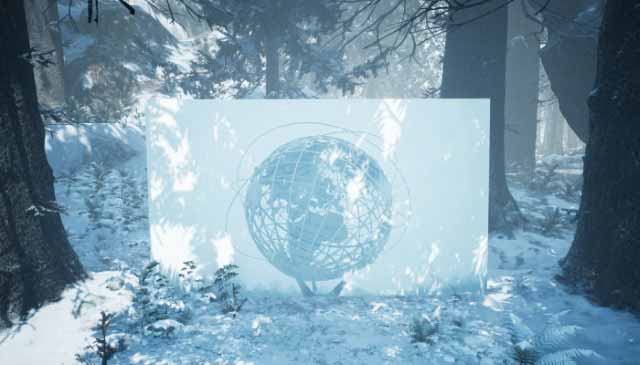 Inspired by the 1939 The New York Times article “The World of Tomorrow as it appeared under the Snow of Yesterday” and its black-and-white photographs of the snow-covered exhibits from the 1939 New York World’s Fair, Terratic Animism takes Times Square’s visitors on a digitally simulated journey through a futuristic wintry forest. Jakob Steensen mixes realities, combining virtual recreations of a forest with screens showing recorded footage of Steensen’s performative explorations through derelict energy structures. The result blurs the boundaries of space and time, envisioning a future dystopian view of objects created to imagine a utopian future, displaying screens within screens, and putting viewers in the center of the forest as it surrounds them each night on the iconic electronic billboards of Times Square.

Jakob Steensen, Artist, said, “In my work I explore past and present imaginations of landscapes, so for the Midnight Moment I researched historical ecology and utopian-themed infrastructures in NYC. I am excited to present a special version of my project Terratic Animism that I made to convert Times Square into a virtual simulation of a futuristic winter forest, where structures from the utopian-themed World’s Fairs of the city’s past are found and covered in snow.”

Jenny Gerow, Assistant Curator at BRIC, said, “We’re thrilled that Terratic Animism, work that Jakob Kudsk Steensen developed while in residence at BRIC, will now be exhibited at such a grand scale where it will be seen by such a broad public. BRIC is proud to have contributed to the development of this piece of work.”

Fred Rosenberg, President of the Times Square Advertising Coalition, and Harry Coghlan, Chairman of the Times Square Advertising Coalition, said,“The World’s Fair provided an outlet for visitors from around the world to showcase their cultures, so what better place to share a globally-inspired video than the Crossroads of the World.  Jakob Steensen’s re-imagination of New York World’s Fair and New York City’s landscape will certainly immerse viewers and transport them from the concrete jungle to a dream-like winter wonderland.”

The following digital screens are participating in the November Midnight Moment:

Jakob Kudsk Steensen is a Danish artist based in NYC. Steensen is concerned with how technology influences how we perceive nature and imagine future landscapes. He develops interactive digital simulations and virtual reality pieces by combining satellite imagery with photographic 3D techniques, cartographic research and performances. Steensen often collaborates with climate oriented NGO’s, scientists and art residencies to develop his work. He has exhibited at Carnegie Museum of Art, BRIC, NY Media Center, The NY Moving Image Fair and at MAXXI in Rome.

His work has recently been featured in The Art Newspaper, Artnet, VICE, Hyperallergic, ARTREPORT and in Spike Art Quaterly. He has received awards and support from The Danish Arts Council, as well as from the residencies AADK, BRIC, Bemis Center for Contemporary Art and Mana Contemporary. www.jakobsteensen.com

BRIC is the leading presenter of free cultural programming in Brooklyn, and one of the largest in New York City. They present and incubate work by artists and media-makers who reflect the diversity that surrounds us. BRIC programs reach hundreds of thousands of people each year.

In addition to making cultural programming genuinely accessible, BRIC is dedicated to providing substantial support to artists and media makers in their efforts to develop work and reach new audiences.