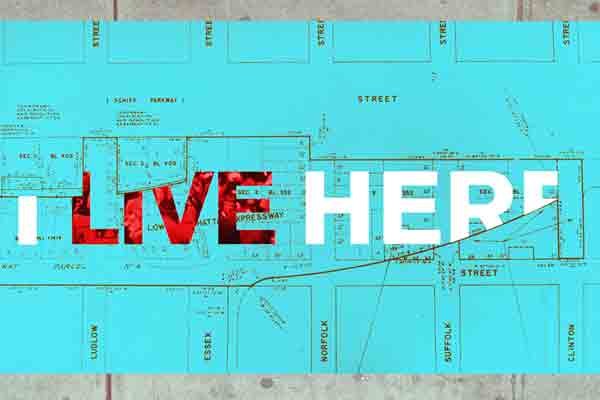 Animation from “A Marvelous Order”

(New York, N.Y.) April 24, 2017 – In partnership with Lower Manhattan Cultural Council and The Municipal Art Society of New York, Times Square Arts presents artist Joshua Frankel’s I LIVE HERE, Animation from “A Marvelous Order” on Times Square’s electronic billboards from 11:57 p.m. to midnight every night in May. This project is a part of Midnight Moment, a monthly presentation by The Times Square Advertising Coalition (TSAC) and Times Square Arts.

In the mid-20th century, urban theorist and activist Jane Jacobs took on Robert Moses, the Master Builder behind most of New York City’s bridges, highways, housing projects, parks, zoos and public swimming pools, in a battle over the fate of lower Manhattan and New York City as a whole – one that is still relevant today.  Joshua Frankel brings that battle to visual life with animation, creating a collage of photographs and film footage, computer-generated imagery, libretto fragments, and blueprints for Moses’ proposed Lower Manhattan Expressway to illustrate the epic structures, millions of people, grassroots protest, and abstract urban theories involved in the conflict. Excerpted from the forthcoming multimedia opera A Marvelous Order, I LIVE HERE travels through the city, speeding by the buildings that would have been demolished by the Lower Manhattan Expressway, watching the infinite drips of air conditioners or the growth of shadows across a street, and unfurling change like rolls of sod across empty spaces. The result examines preservation, “progress,” and the very human conflict that grew out of themes that are right at home in Times Square.

A Marvelous Order is being composed by Judd Greenstein with direction and animation design by Joshua Frankel and a libretto by Pulitzer Prize-winning poet Tracy K. Smith. An excerpt of A Marvelous Order will be performed at Fulton Center on June 15, 17, and 18 as part of Lower Manhattan Cultural Council’s River To River Festival.

Joshua Frankel, Artist, said “I grew up three blocks west of Times Square. I walked these blocks on my way home from school, and later I worked here. Our city is always changing, and whatever dramatic metamorphosis Times Square undergoes seems to caricature what the city is going through. As a young man, the decisions and decision-makers affecting seismic changes to my neighborhood seemed invisible. The sod rolls seemed to unspool on their accord. That youthful perception is part of the spark behind my artistic exploration of Moses, Jacobs and the human actions that affect the shape of our environment.”

Andrew D. Hamingson, President of Lower Manhattan Cultural Council, said “Lower Manhattan Cultural Council is thrilled that A MARVELOUS ORDER, which we will present excerpts of in the River To River Festival in June, will be on those amazing Times Square video boards in May.  There is no better way to honor Jane Jacobs during her celebratory month.  LMCC couldn’t be prouder of Josh, Judd, Will and Tracy for this groundbreaking opera about the people that make New York City pulse with electric energy.”

Elizabeth Goldstein, President of The Municipal Art Society of New York, said, “In Robert Moses and Jane Jacobs, Joshua Frankel found a rivalry truly worthy of opera. We can think of no better stage for this grand drama than the Midnight Moment in Times Square. MAS is proud to partner with Times Square Arts on this installation, a nightly reminder of the character that our city nearly lost to the Lower Manhattan Expressway.”

Tim Tompkins, President of the Times Square Alliance, said, “Jane Jacobs thinking not only saved part of the city in the past, but also shapes policy and practice today.  Now, one of her most notable fights comes to our screens, displaying the tensions that grow out of redevelopment in a neighborhood that has its share of planning missteps.”