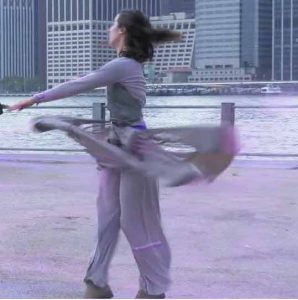 CUNY Dance Initiative and John Jay College in collaboration with

CUNY Dance Initiative and John Jay College, in collaboration with Kinesis Project dance theatre, present TimePiece, a performance on the gorgeous rooftop plaza at John Jay College, 524 W. 59th Street, NYC on September 16 & 17, 2017 at 5:30pm.  Tickets are $25 ($20 Early Bird before 8/21, $30 at the door) at https://timepiece-on-the-roof.eventbrite.com.

TimePiece, or: Another imperfect measurement of us, Riker’s newest collaboration with NYC costume designer Asa Thornton and Seattle visual artist Celeste Cooning, is a site-specific dance about time, perspective and connection over distances created for the breathtaking roof.

With live music and dances on escalators, steps, on the grass and viewed from above, the piece spans the entire space, and invites audiences into the colorful world of the piece.  As the dancers move, spin and partner – their costumes slowly release brightly colored sand – drawing the audience, time, and the performance, throughout the space. …..Imagine a sand kaleidoscope spilling into real life: messy and wonderful.

Audiences should expect to move throughout the evening, however there will be seating available for those in need.

KINESIS PROJECT’s residency and performances at John Jay College are part of the CUNY Dance Initiative (CDI), which receives major support from The Mertz Gilmore Foundation, the Howard Gilman Foundation, and the Stavros Niarchos Foundation. Additional support provided by the Jerome Robbins Foundation, the Fan Fox & Leslie R. Samuels Foundation, and the Harkness Foundation for Dance. CDI is spearheaded and administered by The Kupferberg Center for the Arts at Queens College.
www.cuny.edu/danceinitiative

Development of TimePiece, or: Another imperfect measurement of us has been made possible through a commission by Adelphi University’s Ephemeral Festival and Professor Carson Fox, through the 2017 Insitu Site Specific Dance Festival in Long Island City and through Gibney Dance’s 2017 Dance-Mobile series.

Since 2005, Kinesis Project’s work has been experienced in San Francisco, San Diego, Seattle, Boston, Philadelphia, Vermont, Florida and in New York City at such venerable venues as Danspace Project, Judson Church, Joyce Soho, The Minskoff Theatre, The Cunningham Studio, West End Theatre and Dixon Place.  The company dances outside in sculpture gardens, universities, and annually since 2006 in Battery Park’s Bosque Gardens and The Cloisters Lawn as well as hosting over 30 surprise performances all over New York City and the tri-state area as an element of the company’s earned income and outreach programming with volunteer populated flashmobs. Residencies include: Earthdance 2006, Omi International Arts Center 2008, Kaatsbaan International Dance Center 2011, TheaterLab 2014, Adelphi University 2014. Ms. Riker is a 2016 and 2017 CDI Residency Fellow, 2015 LMCC Community Arts Fund grantee and was commissioned by The Brooklyn Botanic Garden for a surprise large-scale work and performances of her work Secrets and Seawalls at Omi International Arts Center, Long House Reserve, Gateway National Park in partnership with Rockaways Artist Alliance. Ms. Riker has received commissions from Carson Fox and the Ephemeral Festival in 2013, 2014, 2015 and 2016 for large-scale outdoor events, NYU in 1998, for an outdoor work long before “flashmob” was coined, 2006 and 2008 grants from the Puffin Foundation for her work Community Movements, a dance work with community volunteers, Fellowships from the Dodge Foundation, Space Grant Residencies from 92nd St Y, The New 42nd St Studio, Gibney Dance Center, and The Joyce Theatre Foundation, and grants from The Bowick Family Trust and John C. Robinson to support the continued work of Kinesis Project dance theatre. Kinesis Project’s home studio is part of the Nord Anglia International School NY 5th Floor Artist in Residence program on Second Street in the East Village.

Collaboration is an important facet of Cooning’s studio practice. Her childhood experiences as a performer come full circle as she works with Kinesis Project to create an immersive and layered site-specific production. For additional information, please visit www.CelesteCooning.com.

Asa Thornton (Costumes) designs costumes for opera, dance and theatre in New York City. He studied Fashion Design at Studio Bercot in Paris. Upon returning to the States Asa began to design extensively for theatre in Olympia, WA. Thornton relocated to New York in 2012 and was hired as a draper/pattern maker at Izquierdo Studios in Manhattan. While employed at Izquierdo, Asa has had the opportunity to construct costumes for a wide range of productions. Some highlights include: Lady Gaga’s Born This Way Ball tour, Madonna’s MDNA tour, films such as 22 Jump Street, and Broadway Productions including Pippin and Book of Mormon. He has also worked as an independent designer for various music videos, and art performances. Recent collaborations include Carte Blanche Performance, The Red Bull Music festival, and International Brazilian Opera Company.

Kate Jaworski (Composer/Band Director)graduated from West Virginia University in 2007 with a BA in Theatre. She was the director, vocal coach and choreographer for the musicals L’Amour, Ca Fait Chanter, and Le Roi Soleil at the University of Colorado. Kate created, produced and starred in Lucid, a theatrical circus production that debuted at Boulder Arts Week in April 2014, and again at the Boulder Fringe Festival in September of that year. Also in Colorado, she was the lead singer of Gora Gora Orkestar brass band and The Artful Dodgers jazz band, as well as the resident composer for Just Rite Media Film. In New York, Kate sang in the all female, 1940s style trio: The New York Nightingales for the holidays. She was the lead singer for In Persistence of Memory with Kinesis Project in 2016. She assistant directed and designed lights for The Woman Who Was Me, and was the lighting designer for A Mexican Affair, Murrow, and various shows during fashion week. Kate is currently teaching voice and piano privately and scoring a film, The Mile Ground in New York City.

John Jay College of Criminal Justice of The City University of New York, an international leader in educating for justice, offers a rich liberal arts and professional studies curriculum to upwards of 15,000 undergraduate and graduate students from more than 135 nations. In teaching, scholarship and research, the College approaches justice as an applied art and science in service to society and as an ongoing conversation about fundamental human desires for fairness, equality and the rule of law. For more information, visit www.jjay.cuny.edu.