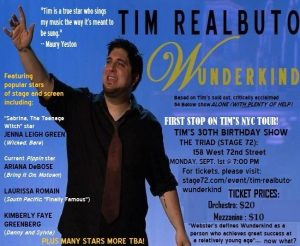 at Stage 72 The Triad

Former child “star” and current NYC-based award-winning writer and performer Tim Realbuto (Ghostlight; The Emperor’s Club) kicks off his NYC tour (and 30th birthday) at the Triad in an all-new show entitled ‘Tim Realbuto: Wunkerkind’, based on his popular show ‘Alone (With Plenty of Help)’, which recently had a sold-out engagement at 54 Below.

In this deeply personal, poignant and hilarious show, Tim will tell the (mostly*) true story of how he grew up in show business and went from former child actor to the adult writer of the popular new Broadway-bound musical Ghostlight.

Some of Tim’s famous Broadway friends will help him along the way, playing different characters from his past, voices in his head, and sometimes (when things get too hard), even playing Tim himself.

Conceived and written by Tim Realbuto, with musical direction by Julianne B. Merrill.

*only if the audience starts looking bored, then he’s going to lie his ass off.

For more information, find Tim on the web at www.timrealbutoofficial.com