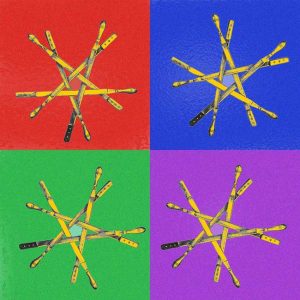 Half Moon Sword will present its 35th annual New York Sword Dance Festival in New York City on February 15-16, 2020. The event will feature 12 performing troupes from across the U.S. in an exciting weekend of performances in public spaces in Brooklyn and Manhattan. The Festival, which New York-based Half Moon Sword inaugurated in 1986, was the first event in North America to focus on English-style sword dancing.

“The original New York Sword Dance Festival, back in 1986, came at a time when sword dancing was just taking hold in North America,” says Sarah Henry, a founder of the Festival. “Since then, it has become a magnet for groups interested in exploring and expanding the rich traditions of Northern English folk dance. It’s thrilling to see the growing creativity, especially among the many young people who are participating.”

Sword dancing is a winter celebration practiced in the farming and coal-mining regions of northern England, where the annual visit of the local sword dancers to the village homes was thought to guarantee good luck for the year. The Festival will feature both mystical, stately longsword and vigorous rapper sword dancing, with live music on fiddle, accordion, and other instruments. In both types of sword dance, the dancers are linked in a ring by the “swords” they hold in their hands while they work as a team to weave intricate figures and patterns without breaking the circle. The dances are thought to have roots in ancient rituals, traces of which can still be seen in these present-day displays of skill. Some performances will also include Cotsword Morris and step dancing, related English folk traditions.

This year’s Festival will feature the “home team,” Half Moon Sword, and their many guests for a weekend of exciting and crowd-pleasing family entertainment. The dancers will perform in various libraries, schools, churches and pubs. All performances are free.

ABOUT HALF MOON SWORD

Half Moon Sword is a New York City sword dance team that has been dancing together since 1981. Their skillful dance displays have gained them a reputation here and in England for precision and fresh interpretations of traditional dances. The members of Half Moon Sword share a love of this dance form with all its ritual and mystery. The annual New York Sword Dance Festival is their opportunity to share the excitement of sword dancing with other dancers and the public. In recent years the team has performed at the Dance America Rapper Tournament in Amherst, Boston, and Baltimore; at the annual New England Folk Festival in Massachusetts, and at the Marlboro Morris Ale in Vermont. The name Half Moon is inspired by Henry Hudson’s ship, the Halve Maen, on which Henry Hudson sailed to North America in 1609.

Use of library space by the New York Sword Dance Festival for this program does not indicate endorsement by The New York Public Library.