Ten Tales of Terror served up by Rothkin & Michaels

Things that go BUMP in the Night 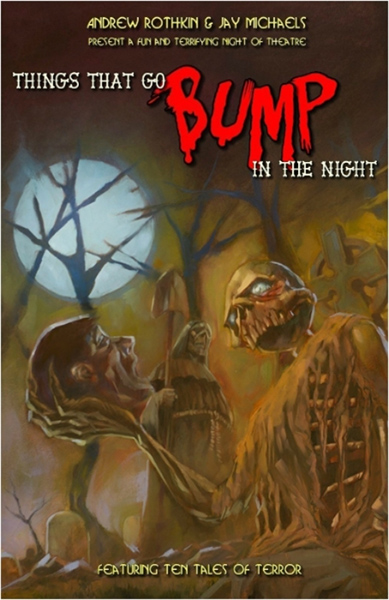 The ghoulish goings-on include:

A Troubled Heart written and directed by Constance George
Featuring Wende O’Reilly and Vance Clemente
The wife of an overseas soldier has a chance encounter at an airport.

Call Upon by Devlin Giroux and directed by Andrew Rothkin
Featuring Samantha Randolph, Emilio Evans, and Ellen Karis
A con-woman posing as a medium finds out how good she really is.

The Change by Andrew Rothkin directed by Robert Armin
Featuring Jon Noto and the voices of Meghan Sinclair and Glen Rubex
This Grand Guignol follows a man’s nightmare into darkness.

The Greenhouse by Mark Cornell and directed by Scott H. Schneider
Featuring Nic Tyler and Nitin Madan, with Sara Minisquero
Two bumbling kidnappers discover the girl they abducted is NOT wanted back.

The Monster Seated Next to Me by Steven Korbar and directed by Jay Michaels
Featuring Frank Carandini and introducing Savannah  Marie Elliott
The “Twilight” and “True Blood” vamps are taken to task by one from “the good old days.”

Not Funny by Christopher Lockheardt and directed by Ariel Leigh Cohen
Featuring Bill Moore and Janelle Zapata
A relationship gone wrong is like a knife in heart … literally.

Taste of Hell by Max Gill and directed by Melissa Skirboll
Featuring Nitin Madan and Adit Dileep
The Middle East has its own brand of demons.

UFO Weather by Jonathan Wallace and directed by Erin Soler
Featuring Charlie Jahye and Lynn Tune
In the shadow of a UFO, two sisters come to terms with their dysfunctional relationship.