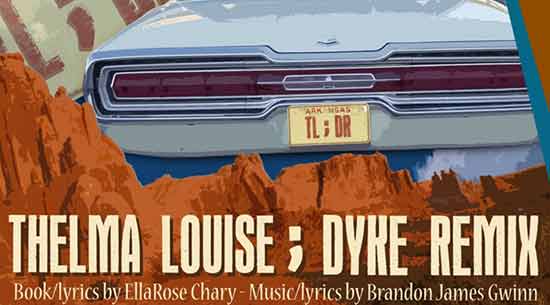 After a sold out run last summer in The Tank’s “Pride Fest” T and L, and their magical flying Thunderbird/badass rock band are back for a one-night-only concert reading at the Tank on Monday February 19th at 7pm. Tickets available on Brown Paper Tickets: https://www.brownpapertickets.com/event/3325357 For more information visit: http://www.thetanknyc.org/theater/970-tl-dr-thelma-lousie-dyke-remix/

TL;DR: Thelma Louise; Dyke Remix is a parody sequel, queer rock musical that asks the question “why do strong female characters always gotta die?” The show turns the death-as-freedom narrative (for women in film) on its head and starts mid-air in a Thunderbird convertible suspended over the Grand Canyon. This concert stars KIMBERLY CHATTERJEE (Kate Hamill’s Pride and Prejudice; HBO’s High Maintenance) and KELECHI EZIE (The  Book of Mormon 1st Nat’l Tour) as T and L, backed by a band of badass rockstars (VIVA DECONCINI, MEGHAN ROSE, and ASHLEY BAIER) led by music director JULIANNE MERRILL. SASH BISCHOFF directs. The concert is generously supported by a grant from the Anna Sosenko Trust.

TL;DR has a book and lyrics by ELLAROSE CHARY and music and lyrics by BRANDON JAMES GWINN (Dramatist Guild Fellows, Ars Nova Uncharted Residents, Feinstein’s/54 Below, Prospect Musical Theatre Lab, Cotton Candy and Cocaine at Theatre C). Loud and proud, TL;DR resists the idea that queer/lesbian narratives have to live in subtext and defies the “bury your gays” trope by giving our heroines the ending they deserve. TL;DR takes on the patriarchy, the gaytriarchy, and anything else standing in the way of T and L’s love.