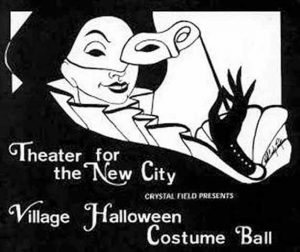 Theater for the New City is located at 155 First Avenue, at the corner of East Tenth Street. Reservations are strongly recommended. The TNC box office number is (212) 254-1109.  Online sales and other info:   www.theaterforthenewcity.net.

NEW YORK — Nonstop theater, a costume competition and ballroom dancing will bewitch the East Village in Theater for the New City’s 38th annual Village Halloween Costume Ball on Saturday, October 31 at TNC, 155 First Avenue. This unique festival continues as a grand coming-together for everyday New Yorkers and artists alike. A carefree fall tradition, it celebrates the creativity that comes with the season.

The annual costume judging begins at midnight with the “Monsters and Miracles Costume Parade,” as all revelers are invited to march past a panel of celebrity judges. Winners will receive one-year passes to TNC and a bottle of Moet and Chandon champagne. Attendees will be judged in such categories as “Most Magickal,” “Most Hydrofracked,” “Most Anti-Oxidant,” “Most Crony-Capitalist,” “Most Transparent,” “Most Encrypted,” “Most Global-Warmed,” “Most Whistle-Blown,” “Most Missing Bees,” “Most Austerity-Budgeted,” “Most Obama-Cared,” Most Capped-and-Traded,” “Most Senior Moment,” “Most Declassified,” “Most User-Friendly,” “Most Vaccinated,” “Most Security-Risked,” “Most Same-Sexed,” “Most Tech Giant,” “Most Public Domain,” “Most Debated,” “Most Patented” and “Most Insignificant.”  Celebrity judges will include Phoebe Legere, Bina Sharif, Chino Garcia, Andrea Fulton, David Willinger, Misha Shulman, Miguel Maldonado, John Gilman, Robert Heide, Sabura Rashid, Romiro Sandoval, Tom Attea and John Jiler.